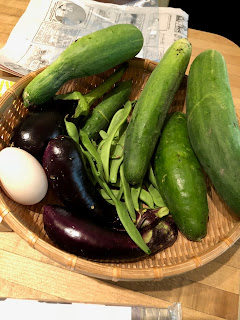 That's my tiny harvest from today and I probably got six kinds of mosquito borne illness while picking even though I was wearing bug repellant. Just going outside to do the smallest thing is a tiny form of torture. I had to open a new bag of chicken feed the other day which is supposed to be easy. You pull a string and voila! the whole fastening at the top should magically come unwoven. I stood there pulling every fucking string on the top of that bag from each side and the whole time I was getting attacked by the horrid little needle-nosers and then I had to come into the house and get a knife and go back out and I finally got the bag open and then spread the feed and it was truly a horrendous experience. Bug repellent smells nasty, feels nasty, and somehow generally gets into one's eyes and sometimes mouth and it's always a toss-up as to which would be worse for what should be a short time outside- getting bit over and over again or wearing the bug spray until I take a shower.

And I'd say that this is a first-world problem but I think all worlds where mosquitoes are to be found have to deal with this shit. At least I have a house with screens and for that I am eternally grateful. Again I say- the early Florida pioneers had to have been as strong and persistent as anyone on earth has had to be in settling a new land and of course, let's not forget the first people to live here- the native people. Perhaps their blood had evolved in some way so that mosquitoes didn't find them as appealing but I sort of doubt that. I do not understand why the early Spanish explorers ever decided that coming back to Florida would be a worthwhile thing to do but they did.
Oh yes they did.

So I went out to take a walk this morning after having checked the weather report and the radar and all looked clear. I was having a pretty good time of it, actually, and was two miles away from my car when I suddenly heard a huge boom of thunder and looked behind me to see a sky the color of a boxer's eye the morning after losing a match.
Immediately it started raining and I turned right around but by the time I got to my car I was as wet as if I'd just jumped in the river. It poured! Luckily, I carry a baggie in my pocket for just such an occasion that I can stash my phone in and that sure did come in handy today. It was really lovely and cool and the hills felt easy and fine. The worst problem was that I couldn't see anything out of my glasses and even less without them. But it was truly okay. An older man (I have to stop saying that because not that many people are older than I am these days) stopped in his truck and asked very politely if he could drop me off somewhere.
"Ah, no. Thanks. I'm sure it will pass," I said.
"It always has so far," he said cheerfully and drove on. He had a Bernie sticker on his bumper.

I've spent some time today watching some old episodes of Parts Unknown on Netflix and working on Levon's sock monkey. It's odd, you know, watching Bourdain now with eyes that know how depressed he really was. It's quite palpable. I don't know if watching is a good thing to do or a bad thing. It hurts but it's also a joy, seeing him do what he did so well. I just wish I didn't have to look at those beautiful brown eyes of his and see the sort of pain that I suppose we'd all thought was maybe nothing but age or fatigue or...whatever.
I've often thought of what incredible actors people who suffer from depression and anxiety are. Sometimes we can get away with the way we're feeling so successfully that absolutely no one knows what we're feeling inside. I know that I've often done this- hidden how I've felt because the bottom line is, I know that what I'm feeling is nothing but feelings and that there is no logic to them at all and if I opened my mouth about them people would be truly worried and I just don't want to do that. I'm not ever going to kill myself so best just to hide or act as if maybe, okay, things aren't all great but overall, eh, nothing.
But how must it be to have to pretend in front of a crew who knows you better than they know themselves, not to mention the millions of people who watch you on TV, on social media, and in interviews? It must take a staggering amount of energy to maintain that facade when the pain is that bad. Which, in the worst sort of irony, only makes the pain so much worse and harder to bear.
I've been thinking about that and the pressure of fame which is certainly nothing I'll have to deal with but I can still imagine that it must be horrendous, not to mention the responsibility for providing the income for the many people who work with and for them and for a family. I've been thinking about how when things are bad for me I can go for walks under trees that are hundreds of years old and I can kneel and work in the dirt and how my chickens and what they do and tending to them soothes me. I think about how my grandchildren rush to greet me when they see me and how absolutely unforced and genuine that is. They love me just for being their Mer whether I am wearing make-up or not, a nice dress or a pair of overalls held together with an old diaper pen. And for the time I am with them, I can focus entirely on them and their needs and their wants and no matter what, I can respond to them with all of my attention and with tenderness.

When I went to the post office today, this notice was hanging up on the community bulletin board. 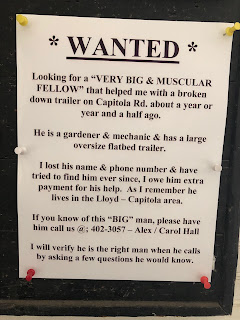 I read it and then left the post office but before I got back to my car I turned around to take a picture.
Somewhere in Lloyd there is a a VERY BIG AND MUSCULAR FELLOW who is owed some money. He is a gardener, a mechanic, and has a very large oversize flatbed trailer.
This cheered me immensely.
I hope this very big and muscular fellow is found but I have a feeling that he's long forgotten any money that he was owed. Still, it is heartwarming as hell that Alex and Carol have not although that last sentence really cracked me up.
I sure do wish I could know the rest of the story if there is one. Don't you?

Life on earth is endlessly odd. And entertaining. And sometimes harder than hell. Painful, joyful, lonely, fulfilling, frustrating and mysterious. Both the pain and the wonder of life can be more than someone can bear.

I have no way to end this except to say that I hold out my hand to you and if you take it, we will both be comforted.