The Handsome Devil Has A Birthday 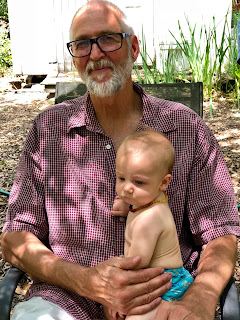 So this man had his birthday today and it has been a very, very lovely day. At least for me. I think he's enjoyed it too.
He went into town to get a few things done at work and then he came home and we decided just to hit the Subway where the truck stop used to be for sandwiches to take to the river for a picnic. And so we did. We checked out the newish Lloyd liquor store too which is right between the Subway and the convenience store and we were both shocked at how nicely stocked it was. How tidy and well-arranged. It's super small and of course the prices are higher than they are in town but if we ever need some emergency Kahlua, I know where we can go!
Now the Subway- different matter. In the fourteen years I've lived in Lloyd, I've probably gotten food there maybe ten times. Maybe. I burnt out on Subway a long, long time ago but once in awhile, it's okay.
Well. Sort of.
So we got our sandwiches and iced tea and headed to the Wacissa. It wasn't too crowded and it was quite odd to be there without any grandchildren to keep track of. We sat under the cypress tree in our folding chairs and ate our lunch leisurely as could be, watching kids jump off the rope swing which was far more entertaining than you'd think.
"Teenaged boys are just so..." I said to my husband.
"Yes. Yes they are," he agreed.
"They're a mess," I said.
He sighed and said, "You have no idea."
"I'm not blaming them," I said. "It's not a bad thing and they can't help it. They're just designed that way."
We watched the boys push and shove each other, their skinny bodies showing every rib and every stringy muscle while the girls watched and waited patiently in a line for their turns at grabbing the rope and swinging way out over the water and dropping.
"They're puppies," my husband said.
"The girls seem so much more composed," I said. "So much more mature."
And Mr. Moon told me that of course they were because girls figure out life at least two years before the boys even began to get a clue.
I wasn't sure about that. I didn't have much of a clue at the age of the kids we were looking at who were in their early teens. I wondered if perhaps it only looked that way because girls are still given much stricter instructions on how to act, how to behave, while boys are allowed to just be wild, to be, yes, puppies. I don't know.
But it was fascinating to watch.
One young girl was so beautiful. She may have only been ten or eleven and when it was her turn, she grabbed that rope and swung back and hit the tree with one sure flat-footed kick and soared out over the water where she dropped like a knife blade, all grace and purpose, the water accepting her like a blessing.
I could have watched her all day long.

After we ate our lunch, we joked about not being able to go into the water for thirty minutes in case of cramps which is one of the strangest myths that we, as children, were universally told.
Cramps? Where? Our stomachs? Our legs? How could that lead to drowning?
The fact that we had never, ever heard of an actual kid dying of cramps after eating and then going into the water before the sacred thirty minutes was up was one of the first reasons we began to doubt the supreme knowledge and wisdom of our moms and dads. Throw in the tooth fairy, the Easter bunny and Santa Claus and next thing you know, we didn't believe a word they said.
Bring on the LSD!
Well. Sort of like that.
And so we ambled down to the water and dove in, the water like a Florida version of a snow-melting mountain stream and when we came up, we smiled and hugged each other, delighting in the sudden coolness of our skin. We stood waist-deep in the water and watched the tiny bream as they approached and then nibbled our feet. It was luxurious to be there, simply standing in the cold river with the hot sun above us, talking and laughing and having fish tasting our toes on a week day. It was like vacation. It was like a birthday.

When we finally pulled ourselves away from the water we felt cool and languid, calmed, our nerves smoother pathways for our feelings to travel along. We came home and there was a tiny nap and I watched this man sleep, his face so absolutely beautiful to me. I guess he and I have spent 35 birthdays together now and I think that I had a mere sliver of an inkling of what his love for me could mean when we married. I remember when we first met and I just did not know what to make of this unreasonably tall man who was courting me in such open and uncomplicated ways. He was falling in love with me, he made no bones about it, but not in a creepy way. In a very real and peaceful way. I'd never experienced anything like this before. Ever.
I'll never forget going to a Winn Dixie with him soon after we met and I already knew that he was going to ask me to marry him sooner rather than later. He was buying a bag of food for his dog, Honey Bun, and as I watched him walk down the aisle of the store, clutching this huge bag of food as if it was a loaf of bread, his head held so high and his face so lit with a smile, I thought, "What is wrong with this guy? No one is this happy."
Glen Moon was that happy.
And why not?
He was a twenty-nine year old man in his prime, his body strong and capable of anything that he asked of it. And he was in the Winn Dixie buying a fifty-pound bag of dog food accompanied by a woman whom he was already certain would be his wife and the mother of his children.

And it wasn't that hard to fall in love with him.
Trust me.

I hugged him this afternoon and said, "I love you so much," and I began to cry and he wrapped those crazy-long but well-proportioned arms around me and said, "Aren't we lucky?"

Here's to a million more and then some. I'll keep making you cookies as long as you want them. And I'll keep loving you and your long arms and longer legs and beautiful face and strong back and magnificent heart for as long as I live.
I promise.