Nothing New And That's Okay 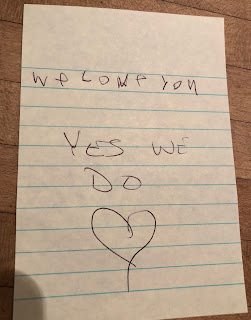 This is the note I found this morning when I got up at the shameful hour of nine o'clock.
Oh my! How I love my fishermen!
When Mr. Moon got home I asked him how the adventure had gone.
"The best," he said. "Just the best."
Aw.
I think Owen must have enjoyed it too. 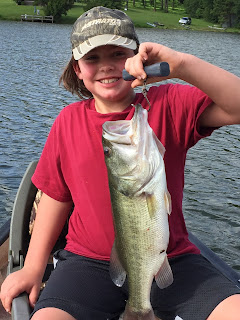 He caught that bass all by himself from cast to bringing it in.

He was such a joy to have here last night. He ate his whole salad and a hamburger and when it was time for bed I asked him if he wanted me to read to him and...he did.
My heart was happy.
We read an old favorite. 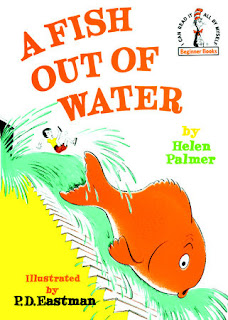 I personally find the book a little disturbing and have never been quite sure of the message, if indeed there is one, but I've been reading this book to Owen his entire life. All the rest of the kids like it too and August always asks for it. If I had a nickel for every time I've read it I'd have enough money to buy a new Johnny Was dress, not even on Ebay or from Goodwill.
And that's a lot of money.

Anyway, I hear that Owen had two sips of the cup of coffee his Bop fixed him and that was enough of that. But they had breakfast at the Waffle House and lunch at a Denny's inside a truck stop so I'm sure it was a near-perfect day. And now Owen and Gibson are at Uncle Hank's to spend the night and the amount of fun that they'll be having there is going to be absolutely without comparison. 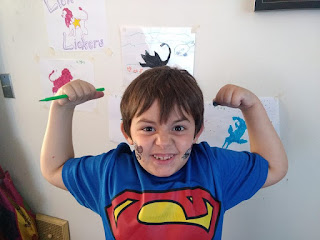 Hank just posted this picture on Facebook with the comment, "He said he was worried it was going to be boring here but instead it is fun!"

Oh Lord. Things could get wild.

How could anything involving Uncle Hank be boring? I mean, seriously.

So what have I done today?
Well. Practically nothing.
Lazy, lazy, lazy.
And sweet.
I spent some time just watching my chickens after I let them out this morning and gave them some scratch. I love my chickens. Bet you weren't aware of that. I had to laugh at tiny Violet who was pecking at the new chickens to establish her rights over the corn because she's about half their size but they obeyed her and backed off to scratch somewhere else. The rest of the big chickens don't seem to mind the new ones one bit but Violet's a banty and as such, a bit wild.
I'd say crazy but that's unfair. She's just who she is.

I worked on Maggie's dress a tiny bit. I picked a few vegetables from the garden including one rather alarmingly-sized cucumber.
Ants and mosquitoes and a yellow fly bit me while I was at it.
Mr. Moon hung the new chicken feeder and drinker up for me and he got approximately forty mosquito bites (no hyperbole) even though he'd sprayed with repellent. It's maddening.

When I was in the garden I looked up into the sky and saw a beautiful swallow-tail kite drifting high, high above. I've seen so many of those majestic birds this year, usually in pairs. I love the way they float on air exactly like a kite, turning this way and that to catch currents and thermals.
Here's a good link about them from the Cornell Lab of Ornithology where it says, "...at times they soar very high in the sky, almost at the limits of vision."
Isn't that just a poem?

And so it goes today. Slow and easy, not getting fussed about much unless it actually pierces my skin in search of my blood. We have to take days like this, I think, where we slough off whatever it is that we don't need like a pretty little green anole shedding its old skin so that we will be more suitably fitted for whatever lies ahead.

Well, it's a theory.

And I have a million of 'em.