Another Birthday And It Is Fine 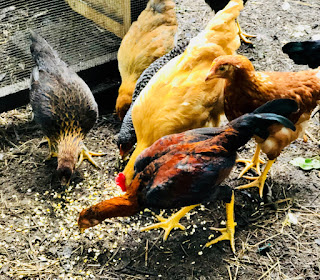 I find myself a fishing widow tonight, all alone although not really. I have the chickens and the cats and they are good company, although the chickens will be going to bed soon. I took that picture this morning to show you how long Hawkeye's neck is. She or he (and I have no idea) is also turning the most beautiful colors. As you may recall, I seriously debated buying the four Jungle Fowl that the Ace Hardware in Crawfordville had but they were the only four chicks they did have and when you drive all the way to Crawfordville to buy chicks, you might as well get what they have.
Which I did.
And I'm glad.
I think they will be very interesting birds to observe as they get older. They seem a bit wilder than the regulation breeds and they are quite lovely to look at, not to mention very much like small dinosaurs with their long legs and necks which charms me to pieces. Do we ever grow out of the love of dinosaurs phase? How could we?

So today is Hank's birthday and as I said it was to be celebrated at El Patron and we took over the porch and made ourselves at home which is what we always do. It was a very congenial group of family and friends-family. Hank had brought Lily one of those unicorn heads that you can put squirrel food in so that when squirrels eat the food, they appear to have unicorn heads. Like this. 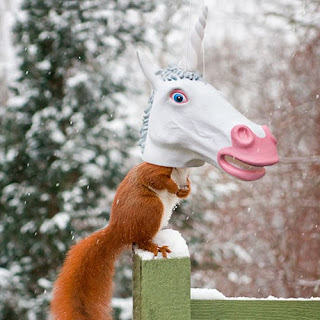 One can only imagine the hours of family fun to be had, peering out windows to watch squirrels with a unicorn head.
Owen immediately took charge of the head and when I started taking pictures, there he was in almost every one, photo bombing with that dang thing.
Here was the first picture. 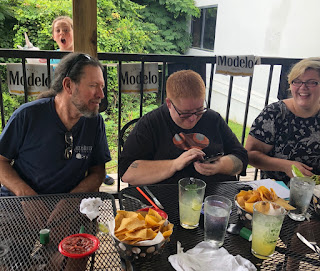 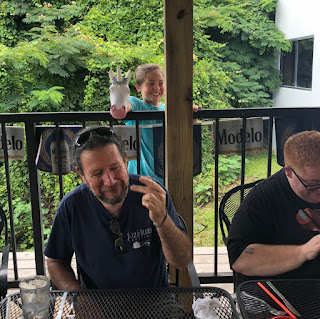 I really don't think anyone had a clue. 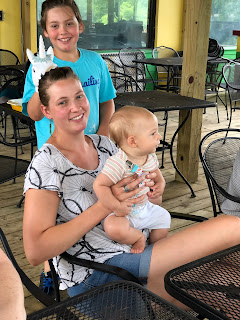 Okay. Maybe some of them did. 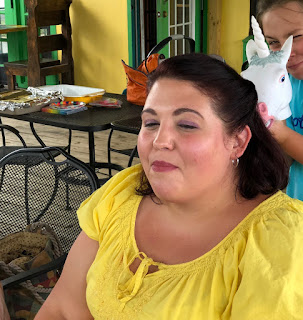 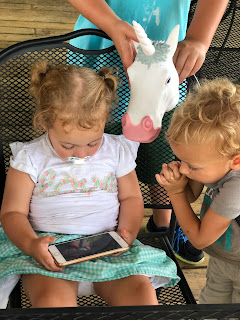 August and Maggie were oblivious.

August was glued to his Boppy for most of the meal. That boy adores his grandfather more than I can tell you. 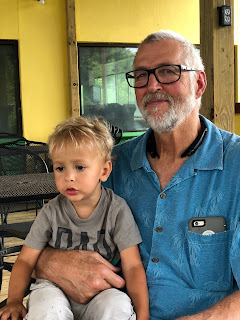 He is a thousand times more affectionate with him than he's ever been with me and instead of making me jealous, it thrills me. Big Boppy and Little Boppy. Curtis Glinden and August Glinden. When Boppy had to leave a little early to get himself on the road for fishing, August came to sit with me and then he realized he hadn't really told his grandfather good-bye. "I want kiss Boppy!" he said, and I said, "Okay, don't worry! We'll catch him!" and I set him on my hip and Gibson came with us and we got to the parking lot before Mr. Moon left and kisses were given. And hugs as well.

It really was a very fun birthday lunch and I was so glad to see all of my children and their loves, not to mention all of my grandchildren. I got to hear about May and Michael's trip to St. Augustine and I got to catch up a little with my ex, Hank and May's bio-dad. Gibson and Owen are still NOT QUITE SURE about how that all works. We have explained over and over again. I mean- there's nothing to hide. This is the way it is. And they've known Jerry and his wife Lucia since they were born but I think that it's simply impossible for them to imagine a time when I was married to a man who was not their Boppy.
Hard for me to imagine too at this point, but it happened.
I knew a woman who had two children and they were maybe about the age that Owen and Gibson are now and she told me that they did not have a clue that she'd been married before. I was aghast. "Why haven't you told them?" I asked.
"Oh, well. I will someday," she said.
All I could think was that when she finally got around to it, it was going to be even huger than it would have been if it had just been part of the family knowledge.
Well, they were her children and it was her family but in my experience, family secrets always eventually come out and it's never good when they do. Just the very fact that something is untalked about and hidden gives it way too much power. Kids know that something is going on. They always do. And that just adds up to a human being who will never feel as if he or she can trust his or her feelings, not to mention those he or she loves.
Okay. Rant over.
Bottom line is that I told Gibson that Hank and May have two daddies and two mommy's and that's just the truth. Jerry's wife has been a wonderful stepmother and her family welcomed those two kids  with no reservations, just as Mr. Moon has been an amazing stepfather and his family never saw any difference between the kids their son sired and the kids he took on as his own when he married me.
When I say that our family is lucky, I mean it and it's true.

So Rachel made Hank a delicious ginger molasses cake and we sang Happy Birthday and the waiter brought Hank first one regular shot of tequila and then a shot glass the size of a juice glass of tequila and I'm pretty sure that he and Rachel and May and Michael and various other friends are still down at El Patron drinking increasingly vibrant drinks and having a very good time. 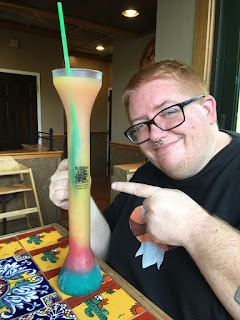 I stole this off of Facebook and all I can say is Ay-yi-yi!

Forty-two years ago I was in my own bed holding my very first baby and as absolutely peacefully ecstatic as any woman on earth had ever been. I had not slept for two nights, hadn't eaten in 48 hours, my eyeballs had broken blood vessels in them from pushing, my throat was raw from the insanely primal growling I did when I was doing that pushing, and my baby, my sweet redheaded baby was in my arms, diapered and clothed in the soft things I'd prepared for him and our friends came over to bring food and visit. And one of the daughters tickled Hank and talked to him and made him laugh.
Yep.
My less-than-twelve-hour-old newborn laughed out loud.
I knew things were gonna be okay.

Today, more than once, as chaos ensued and a unicorn head was being inserted into pictures and people were laughing and drinking and eating and holding babies, someone said, "This is all because of you."

Whoa.
And truthfully, I did have help. My name may be Mary but as far as I know, I have never had an immaculate conception. In any sense of the word.

Here's my figs. I've never seen my tree so full of fruit. 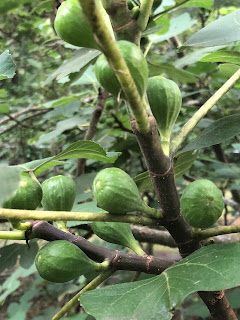 And here's Mick's back end. His tail feathers are growing back. 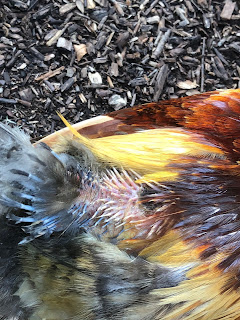 And here's a video of Levon eating oatmeal for the first time.


And here's a Gibson story that his kindergarten teacher told Lily:

It started raining one day while the children were in school and one of the kids said, "Maybe rain is when God is crying."
And then another kid piped up and said, "Or maybe it's when he's taking a shower!"
And then Gibson put in his two cents.
"Maybe it's when God is peeing!"

Yep. That's my family.
How I love us.
Happy birthday, Hank. Thanks for being born and making me a mother and teaching me more about life and humans and love in general than I could possibly have learned any other way. You are double the age this year that I was when I birthed you and you helped me grow up as much or more than I helped you.
I sure do love you.
And I have a strong feeling that you're laughing out loud tonight, surrounded by people who love you too.

All right. That's the news from here on June 10, 2018. Forty two years ago I could not possibly have imagined a day like today. And yet- here it is- grandkids, kids, chickens, figs, true love, internet and all.