I'm Too Tired To Come Up With A Title

It's just been a very low-level day. A hot, sweltering, sticky low-level day. I went outside to do anything exactly twice. Once was to let the chickens out this morning. Mr. Moon went with me and we so cruelly gave those birds the crickets which were not used for bait on yesterday's fishing trip. Poor things. Just when they thought they'd escaped death via large-mouth bass, they got gobbled up by spry and hungry chickens.
The other time I went out was to water the porch plants where I found this. 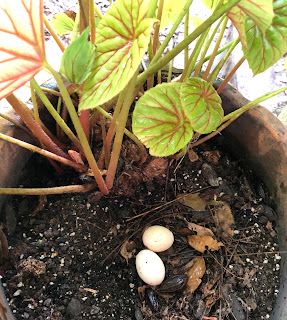 Dang Darla and Violet! I haven't been finding any of their eggs lately at all and god knows where else they've been stashing them.

The rest of the day has been spent in fruitless sewing. I almost finished Magnolia's dress and realized it was way too long and since the bottom part was a ruffle that I'd already hemmed and trimmed with rick rack (why isn't it called zig zag?) I had to unsew the ruffle from the dress part, cut off about five inches of that and sew the ruffle back on. Now this doesn't sound like much BUT in doing this I had to rip stitches and re-gather and reattach. Then I trimmed the seam on the newly attached ruffle-to-dress and did my favorite fucked up magic trick of cutting part of the dress as I trimmed.
So. Now I can either figure out a way to sew cute little hearts all around the bottom or do what I should do which is to rip out the ruffle-to-dress stitches AGAIN and regather AGAIN and resew AGAIN.
You know, this dress really should have taken about two hours from start to finish. I remember making a Vogue bridal pattern dress with a lining for a prom dress in one day.
ONE DAMN DAY!
And this pattern is as uncomplicated as it gets. "EASY! FACILE!" it says on the front of the envelope holding the pattern pieces and instructions.
Yeah. For a seventeen year old.

Anyway, la-di-dah. I could buy my granddaughter a dress twice as cute at Target that cost half as much as I paid for the pattern and fabric and none of that is the point. I enjoy sitting at the machine and listening to an audio book and just messing about with it all. I will admit that when I saw what I'd done with my errant scissor work I gave forth with a loud and vehement, "PISS!" which caused Jack to bolt from the room and I was rather shocked because this is not a curse I generally use. I'm more apt to say "FUCK ME!" but maybe I'm changing it up.

Here's another thing that made me feel inept- trying to install Roku and Sling TV to our TV. I mean, I stepped in after Mr. Moon gave up on pairing the remote with the whatever-that-is and figured that out and managed to set up an account and blah, blah, blah but don't ask me how it's going to work or what channels we have or anything like that. And it makes me feel so old and technologically challenged because even though I can follow instructions on how to do the shit, I have no idea how it works and I always hit a point where I just decide to not worry about it and if I can stumble upon something I might possibly want to watch it's been a real good day.
Ugh.
I remember when technology was going to save us so much time and it was going to make our lives better and easier and that was all bullshit.
Okay. I do love the internet.
But it's like going to the store now- why is there an entire aisle of cereal, most of it made from the same three grains which would be far better for us if we just bought the grain and cooked and ate it with some honey than it is all processed and boxed up and which causes us to lose our minds trying to decide what to get?
And Wheat Thins? I love Wheat Thins. Why are there now fifty different flavors of Wheat Thins? Wheat Thins are not lifesavers. They are Wheat. Thins.

What the hell IS Roku? What the fuck is Hulu? And Sling TV? That just makes me think of a boomerang. Are they slinging channels to us? Slinging through the internet? And Hulu is like Voodoo and Roku is like some variety of sushi.
Ah well.

Well, Mr. Moon is happily grouting away in his shower and I have bread rising and martinis are being consumed. I hear that Owen and Gibson had a fabulous time with Uncle Hank and that Owen drank a a two-liter of Mexican grapefruit soda.
Now see- how many uncles would have Mexican grapefruit soda for you to drink?
I love that stuff. But I only drink it in Mexico.

And Lily went to the beach with her boo Edie and daughter Magnolia and I got this picture. 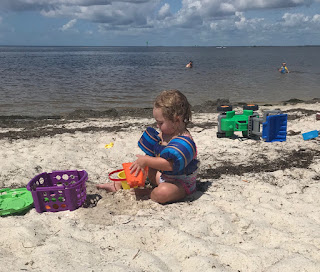 Doesn't she look busy and happy? My little beach baby.
And her pretty mama. 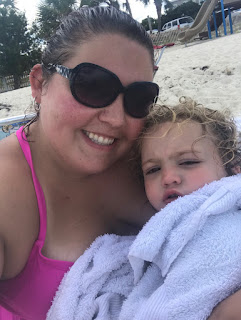 Tomorrow I have my appointment with my beloved Dr. Zorn and even though he is beloved to me, you know how difficult this is for me. In all seriousness, I've been dreading this for months. It's just a check-up. But of course I feel quite certain that my blood work will show some horrible disease process peculating in by body and/or he'll find suspicious lumps like in Terms of Endearment and the next thing you know I'lll be in the hospital trying to wait for it to be time for my next morphine injection only I don't have a mother to yell at the nurses to give me my shot.

Actually, that's not what I'm really afraid of but I don't know what I'm really afraid of and the fact of the matter is, I am afraid and that's all there is to it. As afraid as a little child. Sixty-three years old and that's how it is.
You'd think I'd be a bit more sanguine about it all now, wouldn't you?
Well, this time tomorrow it will be all over.