I Survived And Am Probably Not Dying 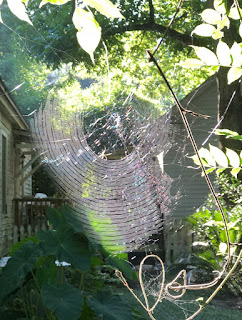 The golden orb weavers are showing up everywhere these days, creating their strong and sturdy works of art. I've already bounced off a few webs. I caught this one in a shaft of light when I was coming back from getting the newspaper this morning. Can you see the artist, the hunter? 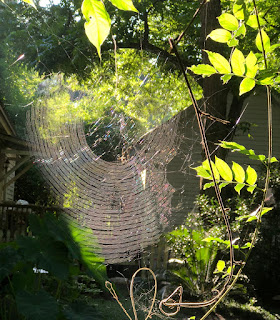 This morning was hard. I began to disassociate about an hour and a half before I had to leave the house. I'm going to quit apologizing for my neurosis about going to the doctor. It simply is what it is and if anyone knows how insane it is, it would be me. I seriously and with all of my heart wish it were not so but it is. It is, in fact, a sort of terror. Anxiety doesn't begin to describe what I feel when I have to present myself in a waiting room, even though Dr. Zorn's waiting room is as innocuous as it can be with its small flatscreen TV on the HGTV channel and the one aquarium and the no art on the walls and the sweet receptionists.
Still. I was absolutely nerve-wracked and not really there at all and not really anywhere although I'd taken an Ativan a half an hour before I left the house and was trying like hell to read my New Yorker magazine which apparently was the annual Most Boring Issue.
The nurse called my name and I went back and got weighed and blood pressured. For once, that wasn't too bad. The blood pressure. Not the weight part. That was pretty bad. I got asked the usual questions and was given a mental health checklist thing to fill out. I was mostly honest on it.
And then the sweet doctor himself came in, looking a bit weary. I'd heard that he and his wife had recently had a new baby and he did have that look about him of a father who is not getting quite enough sleep. I congratulated him and he said that he usually had a great picture he showed everyone but that he'd been running with the jogging stroller and the phone had fallen off and gone splat and was dead for the moment.
He is a human being.
He asked me when I was going to get my blood work done and I said, "I did!"
"When?"
"Last Tuesday!"
"Oh, you sure did! I'm so proud of you!" he said.
Everything looked pretty good and my death level of cholesterol was much better and so forth. I'm a little hazy here due to the fact that my consciousness was probably somewhere up near the rings of Saturn and the Ativan had kicked in.
He did a brief exam before I'd even realized it or been asked to take my clothes off. Lungs and heart, sounded good. I think he did some abdominal palpitation, etc. and asked me some questions. And then it was all done and he wants to see me in another six months to check the blood work again. He wants me to go get my mammogram and he's letting me use the Cologuard thing rather than forcing me to go get a colonoscopy which sounds good to me. Being able to do something at home rather than having to drink gallons of laxative-laced liquid and being anesthetized suits me fine.
As we were both exiting the exam room I said, "I hear that (name of friend who is his patient and who is moving) tried to talk you into moving to South Dakota."
"Yeah!" he said. "I'm going to miss (name of friend.)"
"Well, I wish you'd let my son take her place as your patient since your office isn't accepting new patients."
"Aw,"he said, waving his hand and he went to the receptionist desk and grabbed a pile of new patient forms and said, "Here. You're not the general public Have him fill these out."

See why I love him?

So. Then I did my usual complete-relief/stoned on Ativan thing and babbled to the receptionists about when I want my next appointment and why, knowing the whole time that they were probably thinking, "Why should we care that this woman is going to Mexico for Christmas?" but remaining very, very calm and kind.

I took Hank his papers, I went and bought myself a falafel gyro after going to the Dollar Store and buying myself a book to read while I ate. Then I went to Marshall's to look for something for Mr. Moon's birthday which is on Friday because they used to carry tall man sizes but they don't appear to now. I realized that I could go to the mall where there is a store that does carry tall man sizes but that would have just pushed me off the cliff of insanity and so I went to Publix and drifted through there on automatic pilot and came home and took a nap.

I'm still somewhere out there in the unknown galaxy. It takes awhile to come down from one of these experiences. I do know that Mr. Moon and I went out to find sweet Dottie's egg where she reliably lays and pick some squash and now I need to make supper. I started pinto beans when I got home from town so that's okay.
I also know that all of the chickens, all fifteen of them were out by the garden and it made me happy to see them as one flock of beautiful birds. I can't wait to see what sorts of eggs they are going to lay for me.

Ay. What a day. The hard part is done and now to get on with my life.

Sometimes I wish I had a mother.
Don't we all?