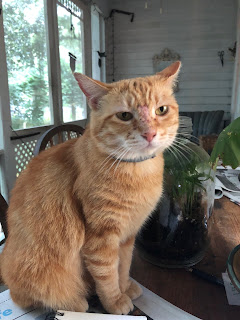 Maurice is looking like a beat-up old tom cat who will drag his balls after him unto death. However, she is not a tom cat. She is a small spayed female whose first impulse is always to fight. To live by tooth and deadly claw, even with the people she loves. And I know she does love us because, well, I just do. But lately the poor thing has been more paranoid than ever and she spends most of her life trying to avoid the other cat, Jack, who I swear must weigh three times what she does. I think he eggs her on, I honestly do. But after all these years together one would think they would have arranged a more amicable existence.
She has something going on with one of her rear legs. She favors the right one and I can't see anything wrong with it (and god knows I'm not prepared to get right in there and examine it because she'd take my hand off) and she can use it to scratch her ear so I don't know what's wrong with it. It can't be broken and there are no obvious injuries but something ain't right.

It's been a suck-ass day. I couldn't sleep half the night for heartburn and it rained today which was nice but I feel so out-of-sorts when I don't get any outdoor time. I spent over three hours ironing shirts and watching Anthony Bourdain and thinking over and over and over again how depressed and unengaged with life he was when these episodes of Parts Unknown were filmed. I mean, he was trying, and his show was still a hundred times better than almost anything else on television but there was no joie de vivre there at all. Even when he ate beautiful food, grandma food, it seemed as if his capacity for enjoyment was completely missing.
"That's terrific," he would say with a flat affect, as if he was trying as hard as he could but it simply wasn't in him to savor, to truly appreciate.
Those of us who have suffered from depression know this feeling all too well.
And his smile never reached his eyes. And he looked so very, very tired all of the time.

All day I've felt as if I've become someone I never thought I'd be. A complete drudge who has no idea how to have fun any more. I mean, I do have fun. Sleeping is fun unless my dreams suck. Reading is fun. Going to the river is definitely fun. Listening to audio books while I do laundry and sweep and make the bed and cook is...fun?
Who am I kidding?
Me, obviously.
When was the last time I went to a movie? To the beach? On a vacation?
I don't know.

And all day every household chore I did from taking the trash to unloading the dishwasher filled me with resentment. Just pure angry resentment.
Let us remember this is Sunday, a day which up until not too long ago I could barely get myself through for the sadness and the depression and the resentment.
Every. Sunday.

So hell, one Sunday out of many is not so bad.

Tronald Dump. That's what one of the guys on Trailer Park Boys called our president on an interview show when he was in character. In the series, his entire dialogue is made up of malapropisms and curse words or cursing malapropisms and WHY HASN'T TRONALD DUMP CAUGHT ON?

The show is made in Canada, by the way.

I've asked this before and I'll ask it again- where in hell is Robert Mueller?

Let's all get some real good fun sleep tonight, okay?