In Praise Of Good Daddies 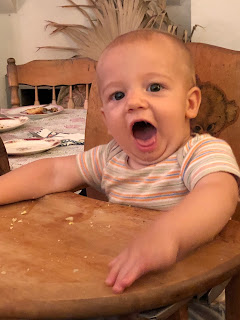 You honestly cannot imagine the chaos which occurs when all five of my grandchildren show up with their parents. Oh, it would be worse if their parents weren't here. I shudder at the thought.
But seriously- from Owen's almost-nine-year-old-more-like-a-fourteen-year-old teenager's attitude down to Levon's crows of merriment, it's never a dull moment, to say the least.
I am thinking about becoming a completely different sort of grandmother. I would wear beaded dresses and lacy things on my head and really impressive jewelry and speak in an upper crust British accent and demand respect and good behavior with nothing more than my very presence. Like the queen. Or like Mick Jagger in drag. A different sort of queen but an imposing one, nonetheless. 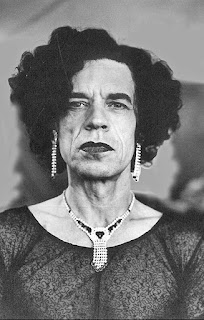 Like that.
The children would be terrified of me instead of thinking of me as someone who is here for their own personal service and pleasure.
"Mer! Can I have a pickled okra?"
"Mer! Can I have hot cocoa?"
"Mer!  Can you come swing me?"
"Mer! Look at this!"

But it's always fun even though a nap afterwards is always required and thank god I am the grandmother because that means I can get a nap whereas my daughters, who have had even more demands placed on them probably do not.
Owen actually got quite put out with his mother because she told me that I did not need to make pancakes or waffles because I'd already made biscuits, pounds of bacon, and a frittata the size of Godzilla's bicep. Not to mention the fact that Vergil had brought what he wanted for Father's Day which was a Costco sheet cake. That cake was so big that when I saw "Refrigerate" on the plastic covering, I wondered just who in hell had a refrigerator that big. It was gorgeous! 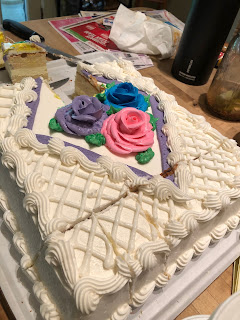 Not to mention delicious.
So yeah, pancakes or waffles were probably not necessary as our carbohydrate needs were definitely being properly taken care of without them.
Which did not deter Owen from a fit of pique which he recovered from when I made the children's table a plate of cheese toast. The frittata did have a lot of vegetables in it and as I told Jessie, I had answered the age-old question of whether there can ever be too much spinach and the answer was "yes."
And then Gibson decided that he needed some time alone and would not come to the table. August and Maggie were pretty happy though, and all-in-all, it was a satisfactory Father's Day celebration. 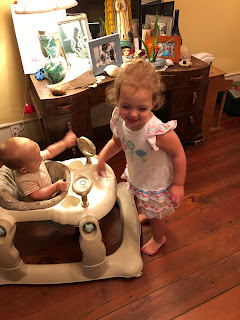 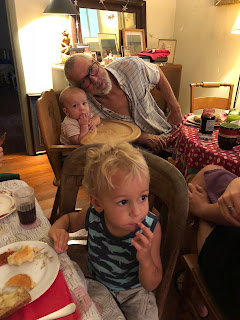 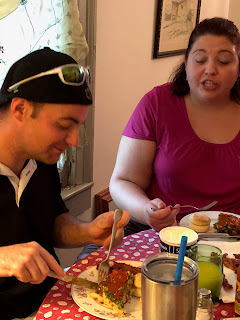 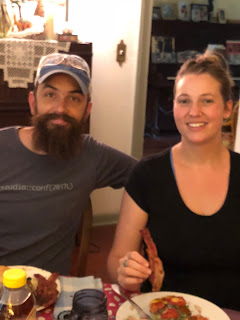 What great papas!
Jessie made all the fellas tell us what the best and worst things about being fathers was.
Vergil said that the worst was when August wanted to be with him when he trying to do certain projects and that the best was snuggling him and reading to him before bed.
Right before Jason got to tell us what his thoughts were, Maggie fell off her chair and got a bump and cried and said, "I want Daddy!" and he said that the best was being wanted. And that the worst was school and sports schedules.
Amen to that, Daddy Jason!
And Boppy? He said that the best was watching his children grow up to be such wonderful adults and the worst was knowing that he wouldn't be around for all of his children forever.
We all teared up. That man. I kissed him on the head and said, "Well. We've seen them into adulthood. We have done our job."
Which is pretty poor comfort but was the best I could do at the moment.

Jason and Vergil helped Mr. Moon on his bathroom project a bit. He's been working like a demon. He was cutting tile at 11:30 last night and by the time I got up this morning he'd already been to town to buy a saw blade and was back home. Here's how it's all going. 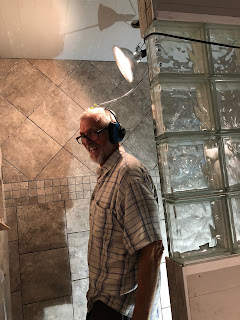 How beautiful this bathroom is going to be! I'm so proud of him.
That man sets his mind on something and he does it. He's done the design, he's done almost all of the work, and he's created something beautiful and practical.
Sometimes I still can't believe I married a man like him. I can't believe I was that damn smart.
And my daughters have gone and married men who, like their daddy, believe in supporting their families in all the ways possible. They are responsible, patient, loving, and can change diapers as well as I can.
Jason is doing Maggie's hair these days. Which charms Lily more than he'll ever know.
Here's one more picture of our little gathering. 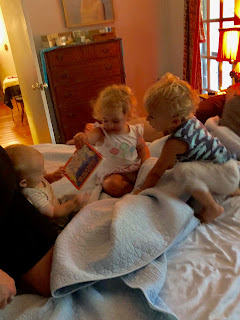 Gibson was there somewhere. We had a cuddle puddle and book reading. Mer and Bop's bed is big enough for everyone.

And after everyone left, I took that nap. Meanwhile, Bop reports that he's got five more pieces to cut. He's pretty excited.

It's Father's Day and that's a day which can potentially be a bit of a minefield for me. I had one daddy who I saw exactly one time after the age of five. Another daddy who abused me and probably two of my brothers and who made our family life a living hell with his paranoia, drug addiction, and pure meanness. Whose actions caused a rift between me and my mother which never could be healed not to mention about a thousand other things that he robbed all of us of which included any semblance of a happy childhood.

When Gibson and Owen came in the house today, I hugged them each separately and said, "Happy Father's Day. One day you will be a father and you will be a good one."
Gibson just grinned and showed Jessie the tooth he lost a few days ago and Owen said, "That's a little early, but well, okay," and sauntered off to see what was going on in the rest of the house.
And I bet they will be fathers and I bet they will be good ones.
Mr. Moon and I may not be around to see that day but I'm pretty sure that it's going to happen whether we're here or not. And that's the important thing.

Here's to all the good daddies. You mean more to this world than you know. And I appreciate each and every one of you.