We Never Did Get Our Green Tea Ice Cream

All of the Hartmanns and Jessie and August and Levon and I went to lunch today at an all-you-can-eat sushi place. Although this sounds like a fast ticket to disaster, or at least some gastritis, the food was quite good. Lily and Jason had eaten there before and love the place and Owen and Gibson love sushi and Maggie and August will pretty much eat anything so there we were. Here are some of my grandchildren. 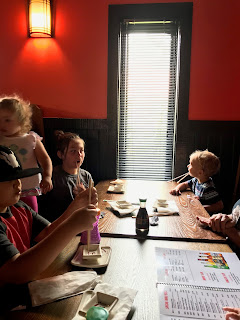 I had left my phone in my car when I met up with Jessie at her house to ride with her and so could not take pictures but Lily took that one and I like it a great deal.
The server told us that things might be a little slow today because the health inspector was there.
Why the presence of the health inspector would slow things down is beyond me but we were warned. We were NOT warned that our server was the only server except for one lady who appeared to be an owner or something who did help out as well. Sort of.
And yes, it was very, very slow. Which is fine except that with five kids who get impatient things can become a little noisy. But it was fun. Owen really made huge strides in the use of chopsticks and it was sort of amazing to be able to order anything from edamame beans to any number of salads and soups and dumplings and spring rolls and tempura vegetables and tofu and just about anything else you can imagine, not to mention sushi.
And then to eventually get these things!
And honestly, the food was good, as I said, and the hot things were hot and the vegetables were fresh.
It just took such a very, very long time and I felt so bad for the server because the restaurant filled up quickly and things in the kitchen must have gotten crazy too because more than once I saw the poor woman wandering around with a tray full of food going from table to table, trying to find the rightful owners of what she was carrying.
In fact, at one point, the owner-seeming woman put a plate of sushi in front of us and asked, "Is this your food?"
We should have noted the sign outside which said, "Help wanted."
They could amend that to say "Help needed," if they wanted to be more truthful.

But I enjoyed hanging out with my grands and after lunch Jessie and I hit a thrift store that Hank has been telling us about. It truly was the neatest and most well-arranged thrift store I ever saw. We ended up buying very little. I got a dress for Magnolia and a toy for August. The toy just charmed me. It's a pull toy. A Fisher Price Tiny Teddy Xylophone. It looks like this. 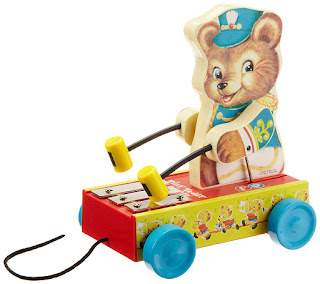 Ding! Ding! Ding! it says as it is pulled about. August, who really needed a nap, got hold of it and ran around the entire store coming within inches of knocking over displays of plates and glassware but his mama nixed that action.
August wanted some other horrendous toys- things with lights and horrible musical accompaniment and I would have bought him at least one of them but Jessie said "No," and she is right and she is the mama. The other day when I was with them August tried playing one of his favorite games which is to punch MerMer. First, very, very gently, and then he increases the force of the punches and I tell him, "No, August. We are not playing that. You're hurting Mer." I know the kid is just trying to figure out exactly how far he can go with me before I lose my shit on him and Jessie always has to step in and make him stop. I apologized to her and said, "I'm sorry. I'm just not good at discipling my grandchildren."
She looked at me and said, "You weren't much good at discipling your children, either."
Sigh.
She is right.
At least now it's not my job. Thank goodness.
And later, August told me that I looked pretty in the shirt I was wearing which has sequins on it and a hula-dancing Hawaiian girl. Which is the sweetest thing anyone's said to me in a long time and how can I fuss at a guy who pays me compliments like that?
When we got back to Jessie's house, August decided that he wanted the dress I got for Maggie.
"But I got this dress for Maggie," I told August. "I can get you another one."
He insisted on at least trying it on so I helped him pull it over his head and he held out the skirt and said, "How you do this?"
And then he proceeded to swish one side of the skirt a little bit and then the other saying, "You work it like this?" As if he'd been presented with a new tool whose use he was unfamiliar with.
It was about the most adorable thing I've ever seen, and Jessie said she'd make him a dress out of a pillowcase and he agreed that that would work. But if the dress doesn't fit his cousin, I'm giving it to him.

Speaking of his cousin, here's a picture that Lily sent. 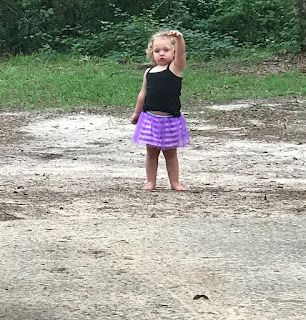 The accompanying text said, "Now the hot mess princess is yelling at me bc she won't come in the house."

Yep. That's our girl.
These little people are angel food and devil food and delicious in both forms.

Maurice's eye is still swollen but she seems more herself today and I am so glad of that.
And I finished embroidering the dress I made Maggie (I think) 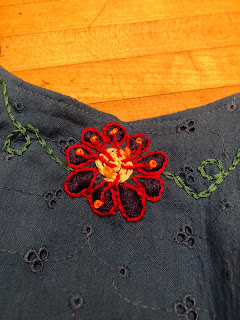 and also finished watching The Keepers.

Watching it made me realize that although there are so many reasons to watch it, the most important reason may be to see how sexual abuse affects children in ways that can never, ever be erased and that to grow up and stand up and tell the truth about what happened is bravery incarnate, especially when the abuser/molester/rapist was a powerful person whom no one would believe was capable of such things.
And for the Catholic church to deny those truths is at least as big a sin and as deeply painful and hurtful to the victims and survivors as the molestation itself.
And that's more than a lot of people can bear.