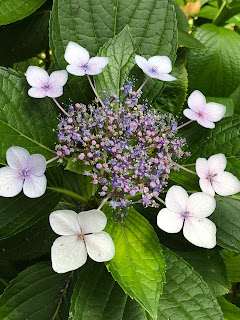 The hydrangea in my yard are of the lace cap variety. They were planted before I got here and like most of the plants in this yard, unless they are underlying, shade-loving plants, do not really do very well. But this year all of the rain has given an extra boost to everything and even the hydrangea are blooming. Not in great abundance by any means, but enough to be cheerful. 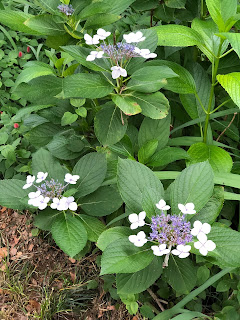 I always wonder which of the former residents planted what and sometimes I thank them and sometimes I curse them. The small wild gladiolas have absolutely taken over everything this year 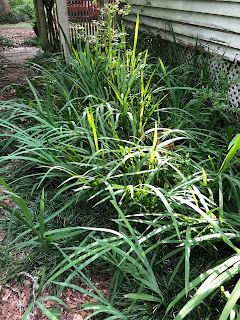 and if they all bloomed, it would look AMAZING because their stalky blossoms are so orange and so lovely 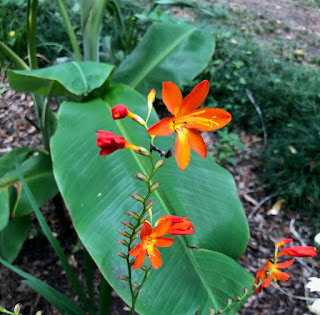 but I guarantee you that at least 99% of all of them will not bloom due to lack of sunlight. And I have spent years pulling and pulling and pulling those things and as you can see from the picture above, it has done absolutely nothing to slow down their spread.
I can see in my mind exactly what the person who planted these bulbs to begin with imagined but alas! It has not turned out nearly that way. I get a bloom here, a bloom there, and for the rest- it's all leaves and leaves and leaves.

On my walk this morning I stopped and took a picture of a roadside wildflower. 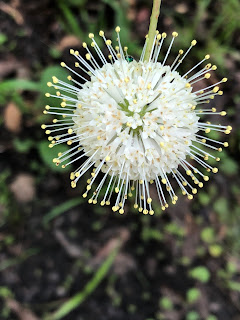 Isn't that gorgeous? It's about the size of a fifty-cent piece (remember those?) and it's called a buttonbush. So delicate and almost otherworldly.

I spoke to a woman on my walk today. We crossed paths on Farms Road and she politely asked me if I was "new" there. I told her that no, I live in Lloyd and was just taking my walks in her neighborhood because it's so beautiful. She seemed okay with that and as we parted ways, I yelled over my shoulder that I am harmless. She laughed. I can hardly imagine anyone looking less likely to commit any sort of mayhem than me although I must admit that I do look longingly into the cow pastures to see if I can spot any mushrooms of the psilocybin variety.
People who live in rather isolated rural areas (which Farms Road is) know everyone else who lives within the boundaries of their small roads and I understand why she was curious.
I did six miles today and it was not so bad. The humidity is not quite as overwhelming and that truly does make a huge difference.

But I have not done a great deal besides that. Laundry, dishes, and a nap. I picked my first three cucumbers of the season and a few more pole beans. Also one slightly bug-eaten eggplant of the Italian variety and a few cherry tomatoes. The corn is coming along and I am fairly thrilled with that. It's a tiny plot but Ellen inspired me with her corn this year. The plants seem small but the ears are forming up. Did you know that each tassel on an ear of corn represents one kernel?

And then Jason showed up with the children. He was picking up a deer head that Mr. Moon had taken to the taxidermist for him.
I know. I KNOW!
But it is the culture of my husband's people and he has been teaching Jason and Vergil to hunt and they have been happy to have venison in the freezer and this deer was taken with Owen by his daddy's side. There are some things that I do not understand and yet, I understand that it's not my job to understand. That is simply the way it is and I love cooking and eating venison as much as the next hunter's wife.

They were only here for a little while so the kids did everything they wanted to do real fast. Horse riding, chicken feeding, swinging. 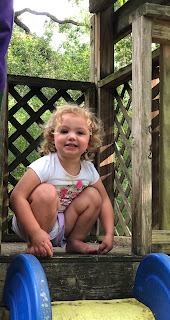 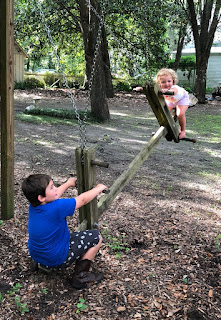 The boys are so sweet with their sister. Gibson agreed to partner with Maggie on the see-saw swing and she was thrilled. When Gibson was on the horse and Maggie wanted him to get off so that she could ride, he told me, "Mer, if I don't let her ride she'll bite my knee."
"Hmmm..." I said. I left the room to let them figure that little situation out.

It was so good to see those children. Lately I've been thinking about how I spent so much time with Owen and Gibson when they were little, from babies to school age. I think about the cuddling and the diaper changing and the nap-taking and the story reading and the swinging in the porch swing and the singing and the playing of pirates and the putting together of puzzles and the playing of cards and all of the things we did together and it seems like a dream of long-ago days and I'm glad I did it because they will always be my babies and in some ways they know me better than anyone on earth. Owen, especially, who was my first grandchild. I told him yesterday that I hope that when he is older, he will still be able to read my blog because he will know how much he was loved when he was young.
"I'm about to start reading your blog," he told me, and I quivered a bit at the thought.
"Well, there are curse words," I said.
He seemed surprised.
It is what it is. And I DO very much hope that all of my grandchildren will be able to access these thousands and thousands of words and pictures that I've put here about them. I can't even begin to imagine how it would feel if I could know what my grandparents thought of me when I was a child and they took care of me and my brother for a few summers when my mother went to the University of Florida to get a teaching degree.
Perhaps I don't want to know.
It always felt to me as if they were performing a duty and they did a good job but as I've said before, I'm sure that we were an extremely unexpected "gift" in their older years.
And perhaps that knowledge has informed my feelings about my own grandchildren, knowing that for me, loving them with all of the nurturing and heart-love I have is what has come naturally, and hoping that one day they will know that or least that they will be the better off for it.

When Jason called the children and said, "Let's go! Time for our supper!" and they loaded into the car, Maggie complaining because she wanted to stay and play some more, I kissed each one of them and got genuine hugs and kisses in return and I told Jason, "You have such loving children."
He and Lily have truly done a magnificent job in raising kids who know they are loved and who are not shy to love back.

We may sometimes make mistakes when we plant this plant here or that plant there. We may not quite factor in the amount of light and water the plant needs and will get. We just throw ourselves into it and hope for the best and in a way, that is what we do with children, too.
We hope for the best and throw ourselves into it.
But the difference is- with children, if there is enough love, it will be okay and they will bloom. There are so many other factors involved, of course, but the most important one, the only one which cannot be substituted by anything for, is our love.
Whether they are newborns or toddlers or eight-year olds or teenagers.
Especially teenagers.