You Can Call It Boring. I Call It Pretty Perfect

I've had a soul-day.
Which of course means that my overalls are in the wash and there's a huge crockpot full of soup simmering away on the counter. Chicken, deer sausage, four kinds of beans, onions, garlic, tomatoes, kale, collards, mustards, carrots...anything else? Oh yeah. Some cabbage. And zucchini and yellow squash. And broccoli. I am lamenting the fact that there is no room, not one bit of room, left for corn or celery.

And the garden is about as weed-free as it's ever been and I planted a row of more arugula and lettuce because those are beginning to bolt as well as some shallots that my friend Tom brought me from his garden to plant.

Here's two pictures that I got via text today: 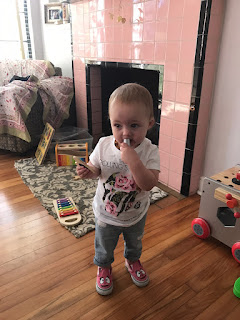 Maggie the rocker and, 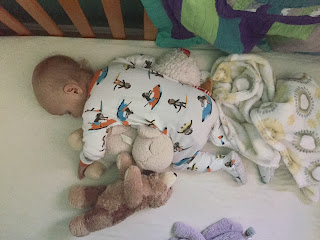 August the napper. Not rapper, although he often does a mean "E-I-E-I-O" from Old McDonald Had a Farm when he's in the mood.

Jessie reports that when he gets in bed now, he pulls his animals up underneath him and hugs them to sleep.

I believe they may both be in line for over-the-limit cuteness citations.

Then again, I am their grandmother.

Mr. Moon should be home soon and I know he's going to be ready for a martini, a shower, a bowl of soup and his own bed. Probably in that order. 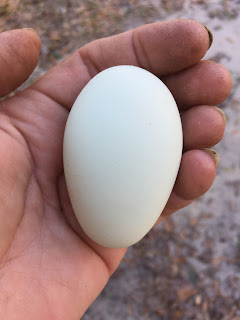 And if you worked outside in the dirt and were as old as I am, that's what your hand might look like too. And yes, I mostly wear gloves when I'm in the garden.
I also got another miniature egg from Darla but nothing from Dottie or Violet.
Lazy girls.

Aw, we all need a day off now and then, whether it's from doing laundry or forming an egg in our bodies and delivering it out of our butts.

And that's the way it's been here. Cool enough to be a delight to work outside, and going to be cold enough to snuggle up for sleep tonight. Quiet and easy and good for the soul.

May we all sleep well tonight and may all of our dreams be peaceful.