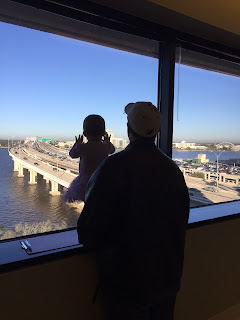 That picture was taken early this morning at Nemour's Clinic in Jacksonville. The view from the waiting room is absolutely gorgeous and Jason and Maggie were taking it in before we got called back to the exam room which did not take long at all.
Such a nice clinic. They even have volunteers come in to do crafts with the kids while they're waiting and today was make-a-Valentine day.

The drive over went fine, we found the hotel, we found a Chinese restaurant (Owen's choice, of course), we found a Publix. Both Owen and Maggie have the damn cough that Mr. Moon is almost recovered from and we needed cough syrup like nobody's business. Also, we'd lost Maggie's pacifier and that was not working out too well.
Anyway, we all got good sleep and had our complimentary breakfast at the hotel which was almost food-like and then we drove the few blocks to the clinic and made our way up to the 6th floor where the neurology department is.

We met our neurologist- a young doctor from Bombay and she asked us questions and had gone over Owen's MRI and his EEG's and she watched the video of Owen's last seizure. Owen was uncomfortable in the exam room, having people talk about him and when he said he wanted to go get some water, I took him out and we got water and then he made a Valentine, carefully choosing the proper pre-cut hearts and gluing them carefully onto the white paper for his mama. We went back in and of course I wanted to hear everything the doctor was saying and we stayed for awhile and the Dr. wanted to examine Owen, briefly, and ask him questions which he answered to the best of his ability. She said that yes, he has epilepsy, a very common kind, and that she is going to put him on a medication and the goal is control of the seizures at the lowest dosage possible.
She gave us basic safety tips- no climbing anything above three feet high, no baths without someone in the room, of course no swimming alone, a helmet and supervision when he is riding his bike.
Like that.

Owen began to get uncomfortable again and wanted to play "I Spy" which is what we'd done on our last visit to the clinic (and don't play I Spy with Owen because you will not win) and when we went out and he perched on that window sill to look outside and begin the game I said, "So, dude. You have something called epilepsy and that's what causes the seizures. A lot of people have this same thing and they're fine and you will be too."
"Well, that's a relief!" he said. "I thought I was the only person in the world who has seizures."
"The only person in the world?" I asked, astonished.
"Well, at least in the United States," he said.
I was at once horrified and ashamed that he's been carrying this around with him. We've been not quite what you'd call reticent about discussing all of this with Owen but until we actually knew what was going on, we felt somehow inadequate to the task of trying to explain what we ourselves did not know for sure and we haven't pushed him to talk any more than he really wanted to.
And dammit, we should have.
But now he knows, just as we do, and I think it's a relief to all of us. He understands that his brain goes a little crazy with the electricity sometimes and that's what causes a seizure and that the medicine he's about to begin is an attempt to prevent the seizures.
He still didn't really want to talk about it today and I understand that.
But we did talk about it some and I told him that there were probably other kids at his very own school who have epilepsy and his mama kissed his head and said, "You have a special brain, Owen," and I know this is a lot for him to take in.
After the appointment, we went to a science and history museum where we saw so many things. 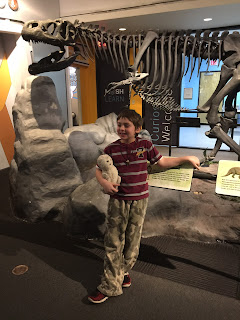 He carried his stuffed owl around with him and gave me a puppet show. 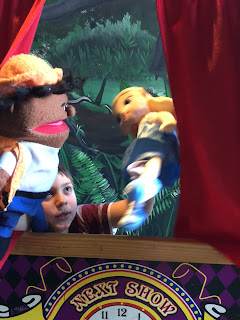 I think his favorite part of the whole museum was a tiny replica of a theater where they were showing old silent movie clips, one after the other, and whenever I said anything he told me to hush and he whisper-instructed me to tell him to hush when he said something, so I did.

It was a silent movie, y'all.

We had lunch after the museum and drove on home and of course we stopped at the Busy Bee.
I had to take a picture of this. 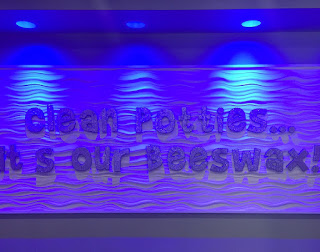 That's what greets you as you enter the restroom area. Men to the left, women to the right.

When we got home, Boppy was here, shoveling and spreading wood chips and Owen jumped out of the car to hug him and he said, "I have epsilepsy and that's what causes the seizures!"
"I heard," said his Boppy who told him that he knows people with epsilepsy too and they are just fine and that so is Owen and we are going to take good care of him.

Owen and I went out and checked for eggs and found four and went out and pulled up a bunch of multi-colored carrots and I showed him the Parcheesi game and we discussed when we would be playing it and then the little family went off to collect Gibson from his other grandmother's house where the boy has been shacking up with his true love, Cousin Lenore.

When I kissed Owen good-bye I said, "We had some fun, didn't we?"
And he said, "Yes we did!"
And then he said, "If I ever need to go back to Jacksonville, I know who to call!"
And then he gave me the biggest seven-year old wink a boy can give and I laughed.

I had bought him a new stuffed animal at the museum gift shop, a possum, and he was holding on to it as he'd been doing since he got it.
Seven years old. Smart as a whip. Still a little boy, even if he's not even quite a foot shorter than I am. But big enough to start to understand what's going on with him and we'll do a better job of that.

And now I'm home and so glad to be here. The little hook-grin moon is shining as bright as it can be, rising above the naked branches of the pecan trees and the frogs are singing their early-spring song and tonight I'll sleep in my own perfect bed next to my beloved although it was pretty sweet to sleep last night in a bed with Owen a few feet away, his breathing so steady and deep.

Mr. Moon held me for a few moments this evening and I finally had a little bit of a cry. It IS a relief to know what's going on and I do understand that this is not the end of this path by any means but it's a part we've struggled to since the day Owen threw up on the bus back in September and then didn't know who his daddy was and I immediately texted Elizabeth because even then, I knew in my bones what was going on.

It seems as if it's been a long journey, but relatively, it's been so short, just as the trip to Jacksonville and back is, sitting between my Maggie girl and my Owen boy, playing baby games with one hand and holding on to my still snuggly little guy with the other, playing Animal, Mineral, or Vegetable.

"Give up?" he always asks when it's his turn to have something in mind that we're supposed to figure out.
And often, we do give up and let him tell us which makes him so happy because he's outsmarted us again but in real life, we don't give up.

And we sure as hell know where the clean potties are when we need to stop to pee.