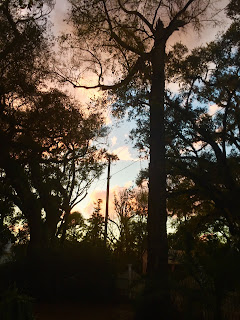 Some mornings are bad. Some mornings are really bad. I find myself curling into a c-shape, sitting in my chair, bringing my shoulders together and holding myself with arms crossed, an attempt to make myself small and disappear, I suppose, a refutation of expanding into the day.

Today is that way. For absolutely no apparent reason except that it is what it is.

I took that picture yesterday evening after the main part of the storms we had had passed. Our power had already been out for awhile and we were without it for at least twelve hours. It came back on sometime after three a.m. and Mr. Moon got up and turned out lights which had been left on and came back and got into bed again until his alarm woke him up and he got up again and went to the gym.

And it was a fine day yesterday. Lily brought the kids over. Maggie was wearing the dress I made her. 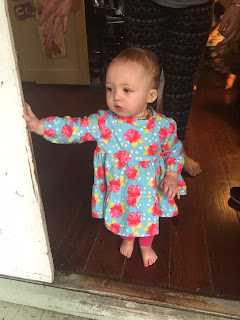 Such a precious doll baby.

And Boppy took Owen to a basketball court where they played for quite some time and had a good time and I laid out the black satin sheet that Lily bought at the Goodwill to try and make a Harry Potter cloak and by the time they got back it was somewhat constructed. 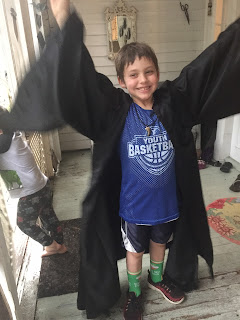 There may need to be, ahem, (no pun intended) alterations.

Supper was warmed up leftovers and a cornbread I made in a skillet on the stove. Thankfully, we have gas. Cards were played, showers were taken by flashlight.

It is so gray today and the wind still gusts. Texts are going back and forth with plans for lunch and so forth and I sit here and type this and curl myself up and release myself again and the wind chimes ring. Today they sound like a warming.
Of what, I do not know.

Yesterday, as I sewed, Gibson came in and asked me if I was an old lady. The only other person he has ever seen at a sewing machine is his other grandmother and thus, he made a reasonable assumption- only old ladies sew.
I told him that Vergil sews too. That Aunt May says. That anyone can sew.
He was slightly amazed.

When they were leaving, he looked up at the trees which the wind was having its way with and he said, his face a delight, "The trees are dancing! The trees are really dancing!"

Oh, to have his pure Gibson heart, his pure Gibson mind, so far untainted by unreasonable fears, or at least, not ones that someone who loves him can't hold him through, can't explain away.

Too late for that.

Time to unfold. Time to move along with this gray, strange day.