I made but little progress on the huge pile of chip mulch. I texted my husband saying, "This may be a job for two men and a boy," and then, "I'm just not 58 anymore."

After my walk and then the small amount of work I did pitchforking mulch, I simply had to go lay down.
And sleep.
Which I did.

I got up and started on Maggie's little outfit. Little being perhaps the key word. 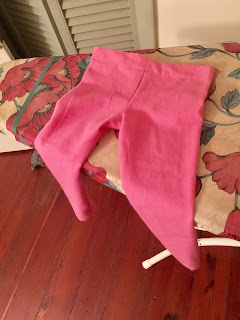 I'm terrible at visual spatial things, just awful, and I can't look at these and decide whether they'll go around Magnolia's tummy or not. I'll measure her again before I put the elastic in them and I suppose that if they're too small, perhaps that skinny monkey August could wear them for pajama bottoms, at least. I'm listening to Sunshine on Scotland Street by Alexander McCall Smith and one of his best characters in that series is a little boy named Bertie whose mother is an absolute nightmare, doing everything in her twisted power to make Bertie a perfect example of being a non-gender directed, male feminist genius. She takes the poor child to a psychologist, she reads child psychology endlessly, she won't let Bertie play any games which might be violent, she won't let him have his heart's desire which is a penknife, she won't let him join the Boy Scouts, she makes him take yoga and Italian, won't let him eat pizza and, insists he wears crushed strawberry-colored trousers.
But I'm pretty sure that wearing pink flannel pants would not destroy August's boy-spirit in the least.

Here's what we're having for supper. 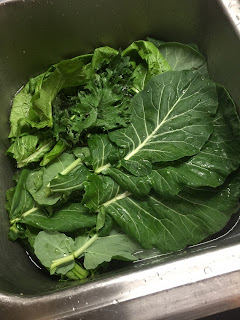 Aren't those pretty greens? Isn't it wonderful that we call them "greens"?
Those are collard greens, mustard greens, and kale. We do not say "kale greens" do we? Why not? Is it because kale is a more northernly-known vegetable? I do not know. But it may yet be proof that kale is an inferior green but that's probably just my prejudice.

I am feeling extremely guilty that I am not going to the Woman's March in Washington. I don't even know that I'll go to the local march here. The last march I went to was for the ERA in about 1975. It was fine. I mean, I didn't suffer from anxiety then and we all walked up Apalachee Parkway to the state capitol where Alan Alda spoke and also some women and how telling is it that I don't remember who the women were. Was Bella Abzug one of them?
God. I suck.

Anyway, no. I am certainly not going to Washington to march although I wish I were the sort of woman who would tug my pussy hat on down over my head with determination and get on the damn bus.

I do know that when I watch the video of the millions of women who are going to be marching not only in Washington but in cities all over this nation on Saturday, it's going to make me cry and hell, maybe I'll join the throngs here in Tallahassee.
I don't know.

Meanwhile, here I am, doing what I do and trying to do the best I can and I absolutely understand that in times like this, that is NOT ENOUGH. Being there in spirit is NOT ENOUGH.
And I know that.

Are you going? Or are you going to participate in a local march? Or...what? Anything? Everything?

Just talking about all of this is making me anxious as hell. I am not only not 58 anymore, I am not 19 or 20 either.

But I will say this- I am in awe of every woman and man who are going to be out on the streets that day, showing their disavowal of this man as their president.

He's not going to be mine either, whether I march or not.

At least that I know.

Yours In Complete Wimpy Solidarity...Ms. Moon
Posted by Ms. Moon at 7:20 PM