Okay. It Is All Okay

I cleaned out the hen house today and it was so lovely in the sun that I decided to do a little weeding in the garden. I had on my Goodwill cashmere, some of my heaviest overalls, a hoodie and a scarf and it was heaven, kneeling in the cool dirt and pulling up the winter weeds.
So different from summer weeding which is buggy and sweaty and just a torment.
I looked over a few rows to see that I had a companion. 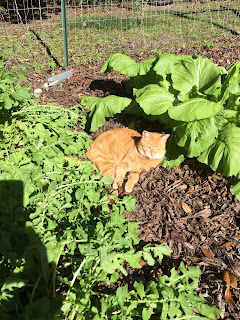 Maurice, lolling between the mustards and the arugula, enjoying the sun as much as I was.

I went in to heat up some soup and got a phone call from Owen.
"Mer," he said, "I know you came over last night but could we come visit today?"
"Of course!" I said! "I would love that!"
"Is Boppy there?"
"Yes," I said. "He certainly is."
And so Lily brought the boys and Maggie June over and we had a fine time at the old Mer and Bop house. The Mexican helicopters were launched and there was a fire in the fire pit and Sponge Bob was watched and hot cocoa was drunk and snacks were eaten and Maggie tried to eat a magnolia cone but she didn't like it. 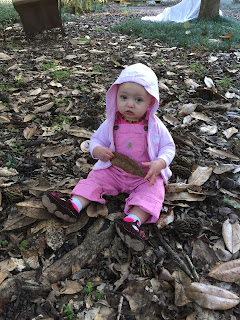 She was wearing her pink Carhartt overalls that I bought her at the Tractor Supply in Monticello and she was so cute and adorable, as Owen calls her. At one point we were looking at her in the hallway and Lily said, "Overalls make everyone's butt look big," and I thought about my own overalled butt and realized that yes, they probably do.
Oh well and La-Di-Dah.

Owen and Boppy did some target shooting with the BB gun and killed a few tin cans. When it came time to leave, Owen did NOT want to go. But it's a school night and we told him that he and Gibson can spend the night this weekend and so they shall.
Before they left, the helicopters were launched again against the darkening sky and Owen helped me put the chickens to bed. He counted them and we noted that Miss Darla was sleeping up on the perch with Miss Violet which is unusual. We closed all of the doors and wished them good night and Mr. Moon and I kissed all of the children and their mama too before they left.
Our rituals. They are important.

Another thing that happened today was that I gave Mr. Moon my whole-hearted support of building a house in Apalachicola. I don't know whether it was the trip to Mexico or whether it's the new anti-depressant, but suddenly, I feel as if I can do this. As if it will be a grand adventure and why not? I love this man so and he really feels as if this is something he must accomplish in his life and although I have felt that it would be too much of a burden and an impossible task to do such a thing at this point in our lives, I also know that we are not old enough yet to reduce our existence to that which is and always has been, just waiting for death.
Fuck it.
If we die, we die. If we survive building a house together and love it, it will be wonderful. We will still have this house where Mr. Moon can keep his project cars and I can keep my garden and who knows? Maybe I'll learn to shuck oysters and get a part-time job.

Or perhaps I'll just lead a life of leisure beside the Apalachicola Bay and read a lot and write a lot and walk to the coffee shop and the bookstore every day.

And I'll be close enough to my children and I'll have an excuse to go buy new iron skillets and so when I DO die (which may happen although perhaps I am immortal) my kids will have more skillets to share among them.

I am cooking pineapple chicken and mashed potatoes and green beans for our supper tonight. It is going to get cold again but Maurice is already firmly planted on the bed waiting for us to get in so that she can sleep on my legs and for this moment, everything is fine.