I Got Out Of Bed. I Put On My Boots

Sometimes, when I am feeling scared and afraid, I put on anger like a teenager or like a pair of steel-toed boots that are really too big for me so that when I walk on the earth I will at least sound like I am strong, like I know exactly where these booted feet need to go. Which probably fools no one, least of all me. But it's a coping mechanism and as we all know, coping mechanisms are hardly ever perfect but at times necessary.
I did that today.
I went and got Lily and Maggie and we drove to a store where I bought Owen's birthday present- some sort of Nintendo thing that's probably going to cause all sorts of problems but it's what he wants and his mom and dad say it's okay so I did. Then I had Lily text all the kids to see if they wanted to meet up for lunch because as I told her, I needed Mexican comfort food, and beyond that, I needed to be with my family. I just needed it.
So we went to El Patron, with its crazy less-than-six-dollars lunch specials and Hank had already planned on eating there with our darling friend Jo-Jo so it was good. We ate on the deck and it was fucking hot and it was fucking humid. For a moment a tiny rain came and the way the light was and the way the rain was falling, we could actually see it, each tiny needle of it defined and it was beautiful but then it stopped and steam rose up from the nearby asphalt and from the jungle of trees beside the deck and poor little August, who'd been napping in his car seat, woke up soaked in sweat. His mama took off his onesie but neither he nor Maggie ever looked very happy although they were content enough, and took turns on Hank's belly and ate guacamole and chicken and beans and rice and Maggie grabbed a handful of sour cream and gave herself a mustache. 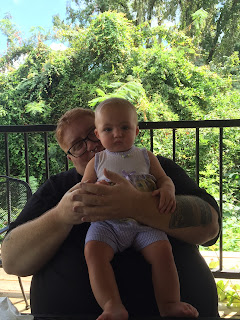 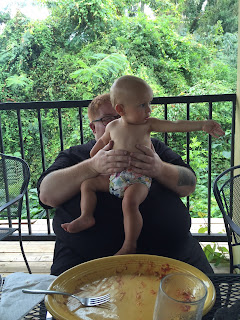 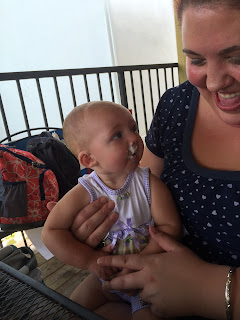 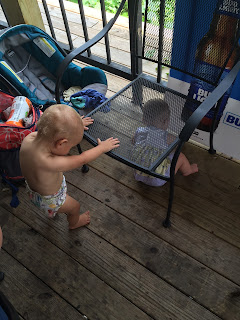 "Where are you going, Maggie Girl?"

Before we picked up Gibson and after we'd gotten Owen's present, Lily and I went by the Dollar Tree to get a few birthday party things. When we were at the check-out, there was a woman in front of us wearing a long, heavy burlapy-type dress and a rope belt and she was wearing a cloth on her head like a nun but not really like a nun and for some reason, I almost lost my mind. I figured her to be part of some stupid-ass religious cult and standing there in my metaphorical steel-toed boots, I did everything but glare at her. When we left the store, I asked Lily, "So- what the fuck about that woman?"
"She was a nun," said Lily.
"No she wasn't. Nuns don't dress like that anymore."
"Yeah. She was."
"No, she wasn't," I insisted, and I was still ranting about it when we got to the restaurant and finally someone said, "Maybe she's a reenactor at San Luis," and suddenly, I felt better. I don't know why the sight of this woman in those clothes just made me want to scream. Maybe it's because I'm reading a book now about a kid who was raised by a woman who was obsessed with Guru Maharishi Mahesh Yogi to the point where she moved to the utopian community which was formed around him and his teachings about Transcendental Meditation in Fairfield, Iowa. (I have no idea why I am currently reading books about utopian communities but whatever...) and I'm just at a really low ebb when it comes to tolerating such bullshit, whether the religion is TM or strange cults or the Catholic church or any organization which charges people for spiritual enlightenment. This kid whose book I'm reading talks about how her mother, who was so broke that a new coat for her daughter about busted the bank, spent thousands of dollars on training to learn how to "fly" or levitate as taught by the TM masters.
Here's a video of some guys flying.

But. Back to my story. So, I felt so much better when I thought that the woman was probably an employee or volunteer at the local San Luis Mission museum in Tallahassee. I really did. She wasn't some poor sap who was wearing that heavy dress and freaking rope belt for some inane religious purpose. She was just a reenactor!
Until I realized a few minutes ago that San Luis is closed on Mondays so there you go.
Whatever. Knock yourself out, lady. And even if, as Lily insists, she is a nun, the Catholic church is just a cult that's mainstream and accepted despite the horrors they've propagated throughout the ages.

I actually knew a guy from high school who was a hard partier, a rough guy who became a merchant marine and who then, for some bizarre reason because a member of the Unification Church founded by Sun Myong Moon. (No relation, although my husband's father used to introduce Mr. Moon as "young sun Moon" as a joke.) He was actually married in one of those giant mass wedding ceremonies arranged by the church. Remember this? 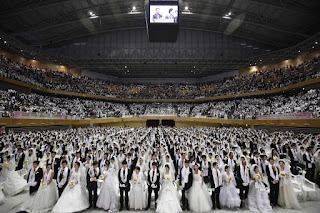 Charles could well have been one of the happy grooms that very day. That could be his wedding portrait!

Anyway, about ten years ago, I was on my way home from St. Augustine and I stopped at a Wendy's and who did I see in there but Charles. His brilliant Irish red hair had faded a bit and his face, like my own, had settled into older age, but it was him, without a doubt. He was with an Asian wife and three sons and he looked tired and pissed off and worried.
I did not speak to him. I just...couldn't. How did this redheaded, brash, smart guy who wasn't afraid of anything fall for a religion that took in street kids and put them in virtual slavery, selling flowers by intersections? I think he actually became a minister in the church.
I hope he's happy. I really do. I'll never forget in high school how he bought a joint from a guy for a dollar and then, when he didn't get stoned from smoking it, threatened the guy that he'd beat him up if he didn't give his money back. And he got his money back.

Ah well. Obviously, I still have my boots on and that's just the way it is.

I sure was happy to have lunch with my kids and tomorrow I'm going to have Owen and Gibson and Maggie for a little while and that's a good thing. This house is getting as bored with me as I am although I've been doing little things to make it shine some. I even took everything off the hallway altar and cleaned and oiled and dusted and polished all of my treasures. I ran my Cozumel beach glass through the dishwasher 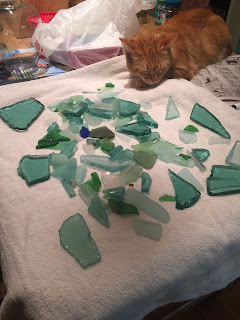 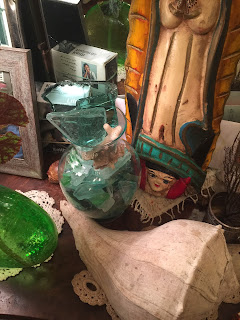 and oh! how it sparkles!

For tonight's hunting widow supper I am having one of my favorites- a big bowl of this: 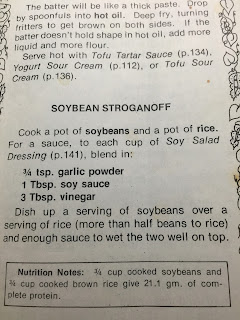 I started cooking the soybeans and rice last night and am about to whip up the sauce although instead of "soy salad dressing" I will be using Duke's Mayonnaise as a base.
Hippie comfort food for me.
This recipe is to be found in a 1975 edition of The Farm Vegetarian Cookbook. 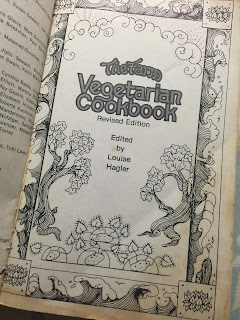 My copy doesn't even have a front cover any more. It's done wore off, as say around here. It's actually a vegan cookbook but I don't think the word "vegan" had been invented at that point.

Was The Farm a cult? Was it a religion? Was Stephen a guru?

Hell if I know. But I do know they had some very good recipes.

Talk to you tomorrow at which point I hope not to be wearing those big, honking, incredibly uncomfortable boots.