Woke up this morning from the worst dream. It pretty much hit every deep and horrible fear and concern I have at the moment or at least, did a good job of trying.
No. I will not relate it. I am not willing to share some parts of me and that's just the way it is.
But.
The anxiety produced from the dream caught me like a cat's paws, held me tight and painfully at the points of the grasp. I knew that both Owen and Gibson, who are on the same flag-football team, had a game in town at 10:30 and I knew for sure that what I needed to do was to get there and try to regain a sense of normalcy and although I was late, I made it. Although both boys fit into the same age category to play on the same team, the difference is obvious. Gibson hates it when someone grabs his flags and actually lays down and cries sometime and when he wasn't on the field, he would come over and climb into my lap and curl up and want to be comforted while  Owen is so tall and in control that Lily overheard the other team's coach say something to our' coach like, "Well, obviously your center drove himself here today," which was fucking rude if you ask me but what are you going to do?

I sat on a blanket with Lily and Maggie 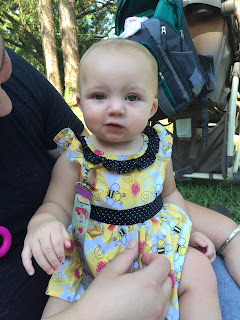 and unlike T-ball, flag football appears to be barely contained chaos and I cheered twice for the other team because of beautiful runs, little bitty kids running like the wind, their legs pumping, the ball held firmly in their hands, their eyes straight ahead to the goal.

Here are the boys posing under a sign which I approve of heartily. 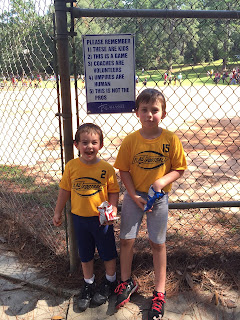 We went to lunch afterwards. Owen chose the demonic China First buffet where I made bad, bad choices and basically ate General Tso's chicken and some delicious greasy green beans and fried zucchini and other made-up Chinese fried food and I haven't died yet. Then Owen and I went to Costco where he ate every sample offered despite having just eaten his weight in noodles and chicken-on-a-stick and we bought a few things for his party which is tomorrow. We discussed stuff on the ride there and to his house like the imagination and how wonderful it can be and how horrible. He told me that this was the very worst thing you could imagine:
Someone comes and takes you from your bed and throws you into a volcano.
I told him that that was indeed a pretty bad thing and kept silent about the dream I'd had in which I would have been so relieved to be thrown into a volcano rather than to suffer the consequences of my dream-actions.
We talked about stories from my childhood and he is fascinated by those. He actually prompts me to tell them so I told him about how our dog, Snoopy, when I was a child was not restricted to leash or yard as that was the way things were in those days and how Snoopy would travel regularly a prescribed path from house to friendly house where he was welcomed and given treats and also, we discussed Chester, the feral man who had lived in Roseland with his dog and who lived on whatever he could hunt, fish, grow or glean and whatever he could earn from doing small jobs around the community and Owen said, "The olden days were the best!" and I agreed that some of the things about them were indeed awesome but then I told him about the kid I knew in the third grade who got sprayed by a skunk and whose mother would not allow him into the house until he didn't reek of skunk any more and Owen said, "Did he have to sleep outside?" and I said that yes, he probably did, and that added a different perspective. He decided that he has the best of all worlds, living with his family in the country as he does, being able to see wild animals in his own yard and I told him he was right.
We also discussed the names of the new chickens and he wants to name one of them "Nicey" after our dear, departed Nicey, and I said that was fine. He said a little prayer to Nicey in heaven, telling her he was sorry and I told him that if Nicey could hear him, she'd probably be happy just to know that he hadn't forgotten her.
So I guess they're Nicey, Darla, and Dottie although Dottie could be Dewayne. As always, we shall have to see. I saw Otis trying to mount little miss Violet today and she was having NONE OF IT and ran away, squawking and I know those banties are laying somewhere but hell if I can find their cache.

Owen and I delivered the party food to his house and then I collected all three kids and we drove to Lloyd and y'all- it's been a long time since I've had all three of those young'uns at once under my care and after about five hours I had to send their daddy a text to say that I was about worn out and could he reach a stopping point and come and get them? He was trying to get the yard and house cleaned up for the party tomorrow because Lily had to work and he himself has to work tomorrow from the crack of dawn or before so that he can get off early enough to get home for the party itself. I felt guilty but I did what I could and that was about all I could do. 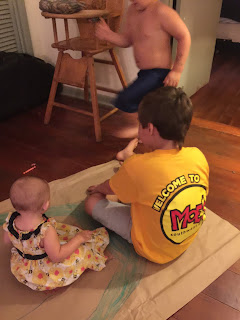 We did puzzles and played cards (Owen can shuffle now and when I asked him where he learned he said, "By watching you!") and we ate Pirate Booty and apples and they had hot cocoa and we all played with Maggie and I changed her diaper and Lord, those children are going to turn the bathwater black tonight. I spread out some big pieces of wrapping paper and traced Owen and Gibson and let them color themselves in and that was fun for a few minutes but Maggie kept trying to get in on the action and they're so sweet with her, so patient, but it was a problem. It's like the minute they walk in the house the dust comes out of the corners to greet them and toys get spread everywhere and my name is invoked over and over again and every glass in the house is used and it was chaos, although not very controlled. Maggie did love me kissing her neck over and over again and would turn her head to the other side so I could kiss that part which was the sweetest and best thing ever and Gibson asked me to scratch his back and he found an old cane and pretended to be an old man and kept calling all of us "sonny" and Owen chased a poodle that had found its way into our yard but never could catch it. They played horse and watched some TV and they are the sweetest, best children but after awhile, old Mer just couldn't do anymore.

So. There you go and here I am. Tomorrow is Owen's seventh birthday party and he comes up to the top of my bosom and I love my grandchildren more than I love my life itself.

And tomorrow Owen will have his party and I wonder if he even begins to know the sacrifices and work that his parents have put into this event to make it a day that he'll enjoy and remember. Do you remember your seventh birthday party? I don't. And even though Owen's an incredibly aware and sensitive child, I doubt he will either. But it doesn't matter. He won't have to remember the details to know, without a doubt, that he was always loved and cherished and protected and celebrated and even respected. By his parents, his siblings, his aunts and uncles and friends and teachers and grandparents. He'll never get taken from his bed at night and thrown into a volcano and he'll never be refused entry into his house should be be sprayed by a skunk.

It's been a long day. Mermer is going to eat some leftover rice and vegetable casserole and get into her bed and spend her last full night alone for this specific hunting trip. I can't even believe that tomorrow night, late, late, a big sweet man will crawl into bed beside her, to kiss her and hold her. The man who, if she hadn't loved him so much, if he hadn't loved her so much, there would never have been an Owen.