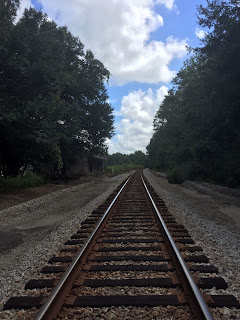 So. I walked to the post office today and then I went out back and walked down the tracks a little bit and took this picture. That's the railroad track heading east.
I'm really glad I went to the PO in that the new issue of Florida Sportsman was there and god knows I need to read that.

It's been that sort of day.
Could not get motivated for anything. I cleaned the hen house because it had to be done and then opened up the young chicks' nursery coop so they could explore the big coop and one did fly out but then she just peep-cried to get back in and eventually she did. 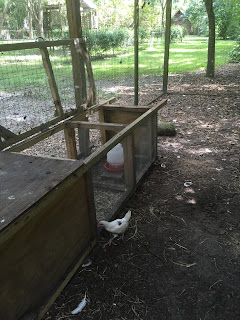 I don't now about these babies. They seem to just want to stay in the protected, covered part of the little coop, huddled together. It's been three days now and from what I've observed about chickens, they should have pretty much forgotten their former lifetime and started adapting to this one. I go out and give them grapes and treats but they don't come out to get them until I leave. I know the woman who raised them and she is sweet so I don't know what the deal is.
We will try again tomorrow.
Dearie, Otis, and Violet seem to be hanging with the rest of the birds these days. So that's good. I got out in the garden this late afternoon because I couldn't live with myself if I didn't do something that made me sweat today and Butterscotch came in and helped me weed. That old gal can sure turn up some dirt! I pulled all the spent cream pea plants and am getting things ready for the fall garden. I need to take a shovel to the sweet potato patch and see if I've got anything there. I've never grown sweet potatoes before this year so I don't really have a clue.
It was miserable as fuck, working in the garden so I feel better about myself now. Even though I sprayed myself liberally with the OFF! the mosquitoes were horrendous and even the ones that didn't make landing buzzed about my ears with their supersonic piercing screams which the headphones I was wearing didn't do a damn thing to block.
Sort of a slow, self-induced path to insanity, I guess, being out there. If it wasn't the mosquitoes, it was the ants and then the gnats. And the heat. And the humidity.
Florida. How I fucking love you. How satisfying you are to someone who has a deep need to suffer. I heard that someone in a nearby town ran over a python the other day which means that they've made their way all the way up the state and all I can do is shrug my shoulders and wonder if they eat mosquitoes.

I did hear from my husband. He is good and he is happy. Yesterday he saw a herd of elk in the wild but he didn't shoot any. He just watched them. Now don't misinterpret this- he will shoot one if he feels like he can get a good shot. He loves to see the animals but he's a hunter, not just a wildlife observer.
After thirty-two years I'm still bewildered when I think about the fact that I married a hunter but I did and as I've said before, I'd rather have my old man off in the woods than in bars picking up women and yes, I do realize these are not the only two options but when you throw in all the other stuff that came with Mr. Moon, I'll take him gladly and make him venison stew any day of the week he wants. 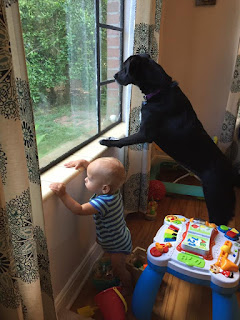 Greta and August. I might go babysit for him tomorrow for a few hours. This would be the first time that he's ever been taken care of by anyone but his mama or his daddy for more than an hour. It's time and Jessie and Vergil deserve to go and have at least a lunch alone together. He's just so attached to his mommy and hell, I mothered my kids the same way so I can't say a word. But it would be nice to try and ease in on this slowly, let him get used to me on a more one-to-one basis, learn to trust me and feel comfortable with me.
Plus, you know- Greta will be there to help.

And since I'm stealing off of Facebook, here's Magnolia June in what Lily titled "the obligatory first spaghetti pictures". 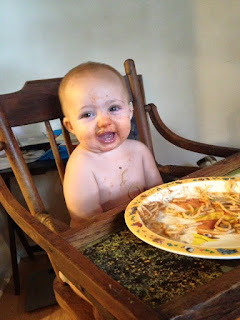 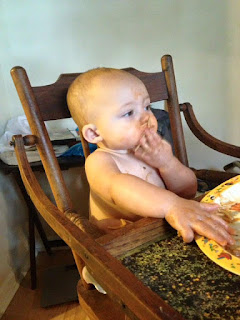 I think she liked it.

Well, that's enough from me and my tiny world. I've thought a lot about Donald Trump today and how the man can apparently do or say anything without seeming to suffer at all in the polls and I'm at once terrified and completely dumbfounded and all my life I've been hearing people talking about "it's the end times" and fuck me if I'm not thinking it finally may be.

I'm going to go have a martini and listen to Garrison Keillor talk about the folks in Lake Wobegon and try to stop thinking about politics or end times or pythons or oil spills or the melting ice caps or even mosquitoes for the rest of the evening.

We'll see how that goes.