Restoration (The Party's Over) 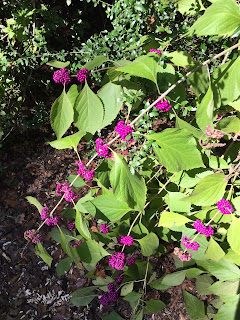 We woke up this morning to an outside that was cooler than the inside and the slant of light which whispers fall is coming.

Incredibly beautiful. Owen helped me let the chickens out and as each one came through the hen house door he greeted them by name. Last night he helped me shut them up and we counted them and named them and stroked them in their sweet sleep coma. He's been such a good helper, that one. And because their power is finally restored, they'll be packing up today and moving back home, the mama, the daddy, the two boys, the baby girl who looked like this last night. 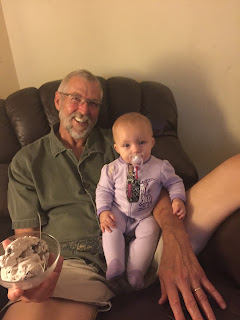 The cold has hit her hard and she wakes up long enough to get some nurseys and then falls back asleep but only in someone's arms because she doesn't want to be put down. Thankfully, Jason is off today to that he and Lily can work together to take things back home and get things back in order there.
It's going to take awhile to restore order here, as well. 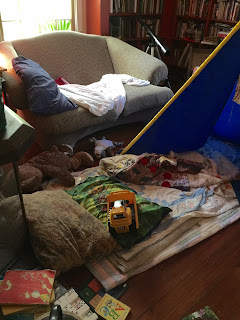 I now remember why it's so hard to keep a house tidy with children in it. I mean, I knew that, but I've been given a gentle reminder and it makes me respect myself more for doing as well as I did when my children were growing up. I remember my mother dropping "gentle" hints like giving me a pumice stone on a handle, the purpose of which was to get rid of that nasty iron build-up stain under the rim of the toilet and once, when she was baby-sitting, telling Jessie and Lily that she was going to show them how to "really clean a sink."
Yes. I still bear resentment about that. My mother did keep a good house but she also always, as far back as I can remember, had "help," which is what we used to call having a "maid" which is another word I don't like. I prefer the British "cleaner" which is what the hell it really is.
Not many mothers have help these days although I have noticed that some husbands are a hell of a lot better at pitching in with the childcare and domestic chores than husbands used to be.
My daughters are married to some of those husbands and I respect the hell out of them.

Anyway, that was definitely a strange segue and I have to admit that I'm exhausted and still not feeling well but I'm so damn grateful that we've been able to have the Hartmann family staying with us. It's been gratifying to know that everyone is safe and sound and comfortable and well-fed and entertained and there have been some mighty sweet moments. Both boys have thanked us profusely for letting them stay here and really aren't that interested in going home, as I said last night. Gibson asks his Boppy if he can sit on his lap while Boppy's in his chair and it's the sweetest thing in the world. Last night I made the mistake of turning out the light we'd left burning in the library where the boys were sleeping and Gibson woke up around three and was crying because he was scared but he let me take him back to his little pallet and turn on the light and cover him up and kiss him and he fell back asleep which made me feel needed in a very real and precious way.
And of course, having Maggie to snuggle and kiss has been such a gift.
I sort of like Jason and Lily too, if you want to know the truth. We get along nicely and it's felt like a true communal effort, keeping things running and as ship-shape as possible.

It's been good and it's going to take a while for us all to get back into our routines but we will. I walked to the post office this morning and chatted for a moment with the guy who owns the local car repair shop and then with my next-door neighbor on the way home. I've got sheets and towels on the line. Lily just sent me a picture of her completely clean refrigerator which now contains two Rock Star energy drinks, a jar of pickles, a bottle of mustard, soy sauce, sesame oil, and a bottle of mojo marinade. Period.
It gleams!

So. We are feeling the calm after the storm and I am going to slowly move towards normalcy. I think I dreamed last night that I mopped the kitchen. Perhaps I will do that in real life, too, if I get the energy. I'm not going to force anything today. It's just the most pleasant thing in the world to sit here on my back porch in the coolness of the day with the crickets chirping and distant sounds of life from neighbors, the sheets on the line like prayer flags of comfort and cleanliness, the chickens pecking about, not caring in the least about what the humans have or have not gone through since last Thursday. Their world is entirely intact and there is, for me at least, great comfort to be found there. 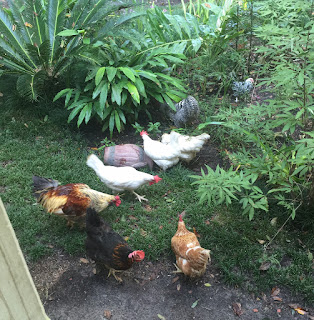