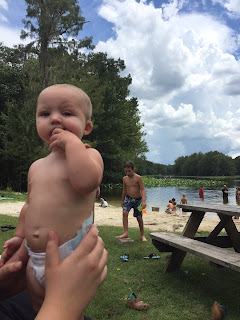 I've felt better today and realized when I woke up that truly, I've only had this cold thing for a week, which is not so long for a virus to hang on. I didn't even try, though, to do much of anything. My husband is busy enough for both of us, getting his things ready to go to Canada and when I tell you that I got up at three-thirty this morning to pee and found hunting clothes running in the washing machine, you may as well believe me because it is the truth.

Lily and the children came over and we drove to Monticello. I wanted to go to the Tractor Supply there to get chick starter feed for the wee ones coming this week and the boys have been wanting overalls and I thought they would have them. They did not, though, not that would fit the boys. We did, however, get Maggie June a pair of very pink baby girl Carhartt overalls which are going to be darling on her this winter. I love the Tractor Supply. It has EVERYTHING and as Lily pointed out, would be an excellent place to go should the Zombie Apocalypse happen. They have weapons and dirt and seeds and all of the things you'd need to survive. Even food, of a sort. Mostly the snacky sort, but still.
We paid for our purchases and drove the back way to the Wacissa. While we drove, I put the annual Oxford American CD in for us to listen to. We heard this song, among others.


What a perfect song to drive past fields and cows and horses and little houses and tiny crossroad villages listening to! "Why does something so simple make me so happy?" I asked Lily.
She did not know.
But it does. It did.

There were lots of people at the river and among them, a woman that I knew so many years ago and haven't seen in over a decade. We had an odd and strange and beautiful and amazing and painful relationship. I look back at it and wonder how in the world it came to be. But it did. And it was an incredibly strong relationship and it occurred at a time in this woman's life when almost everything had been taken from her, including her life. We took her in for awhile and she became one of mine and that was good, it was fine, but we became too immeshed for our own good and that was mostly my fault. Mine entirely, most likely. We split apart and then came back together when another tragedy befell her and in fact, that was close to fourteen years ago, right now.
Again, we fell apart after that.
I was not always grace-full but it's as if my part in her life was absolutely delineated to specific times and places and I recognize that now and I know I played my part when it was mine to play and I did it as best I could and I do not regret any of it, and wish I could say that I was still the sort of woman who would do it all over again. I think I would.
And she has come so far. She got all kinds of degrees and runs her own business now and has moved back to Tallahassee and travels far and wide and does good works. She looks wonderful, seems at peace, and I am so glad for her.
It was mighty fine to see her and I was happy for her to get to meet Owen and Gibson and Magnolia, to see Lily all grown up from the little girl she used to know to the mother and woman Lily is now.

Mr. Moon came down to the river to join us as he had worked in the yard some and needed to cool down and it was good. It was a simple, easy time at the river with children playing and perhaps a bit of healing, too.
A day of the most prosaic familiars as well as the completely unexpected.

I came home and tackled the cabinet where the leftover containers live and threw away so many old empty containers and lids without bottoms and bottoms without lids and that felt fitting and good, such a small chore, but one that will make my life less frustrating.
Simple. Simple things that make us happy, like listening to a man singing about building a stone fence, a sweet potata, a guy named Raggy Levy, ragged as a jay bird while a baby drowses in the back seat, two boys chatter softly, and the roads unfold before us, leading us straight to the river where we never know who we'll see, who we'll meet, but knowing almost for certain that the river will welcome us into itself and allow us clarity and coolness and to arise from it somehow different and perhaps even better, than we were before we gave ourselves to it and it accepted us.

While we were talking to Jennifer at the river, she told us about a video that had been recorded of her speaking of the accident which led her to my home. I'd embed it but somehow, I feel shy to.
But you can find the link here, if you want to see it.
It's powerful.