Mary Moon- THIS Is Your Life! 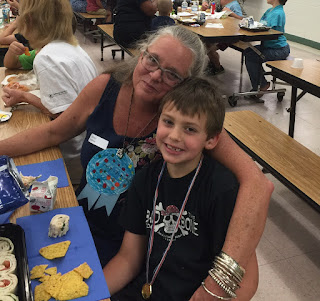 Here I am with my grandson, the Citizen of the week, the line leader!
So proud. He and his other grandma and I ate our lunches together and it was a lovely lunch indeed. Turkey roll-ups, Doritos, grapes, and Oreos. You just can't beat that.
Our grandson made us both badges to wear- you can see mine. When he gave them to us he handed his other grandma hers which was gold. "Gold for God," he said. She talks about God a lot. Then he handed me mine and said, "Blue for the ocean."
Nothing could have made me happier.
He knows me so well. And I even put on makeup and my bracelets to go have lunch with that boy! This may have been the first time I've put on mascara since I got back from Cuba which is sad, but true. And it was worth it.
I do have to tell you that when we were chatting over lunch, I said that when I was in elementary school, I'd sometimes ridden the bus.
"There were busses when you were a kid?" he asked me, his eyes huge with shock.
"Yes," I said. "But they were pulled by dinosaurs."

After lunch, I got a text from Billy whom I haven't seen in dog's years. We met up and both of us did some birthday shopping. We talked and talked and talked and he hadn't eaten lunch so we went to a sandwich shop and I helped him eat his sandwich and drank iced tea and we talked and talked some more. We had catching up to do. While we were talking, a lady walked by and then sort of stopped and turned around and stared at us. I thought, "What the fuck?"
And then I realized that Billy's big burly beard is Smurf blue right now and his mustache is hot pink.
Haha!
Lord.
I didn't even take a picture of him. Which I am sorry for now.
But it was so good to see him. I've known him since he was a child and now here he is, all grown up with a six-year old son and a wife and, well...I just love him.

Then I went and did a little more shopping and came home and now I'm fixing supper for Hank and a photographer friend. They came out to do a photo shoot because my house is all funky and shit. And also probably because I would be coerced into making venison meat loaf.
Here's the photographer's web site. Excellent work.
Hank sure does keep my life interesting.
Not that it really needs much help in that direction- I mean, what with my chickens and grandchildren and stuff- but he puts the extra shine on it for sure.

The only other news I have is that this morning I went out and literally took those little chickens out of the baby coop and set them down in the big coop and closed the lid on the little coop where they've been hiding for the most part for a week and a half so they couldn't get back in. I have decided to name them Dottie, Darla, and something else that starts with a D that I can't remember at this second.

Oh, how I love getting old.

One more thing. Billy just sent me this. 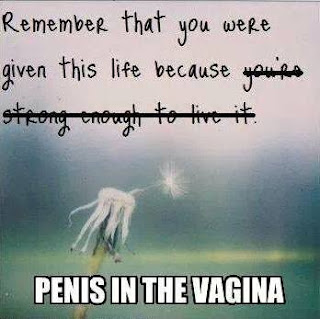 It is, without a doubt, my favorite meme ever. And perhaps, the truest.
So when you're feeling down and discouraged, just remember those words.
Penis in the vagina.
And you'll feel comforted and inspired. I promise. Or laugh. Which is even better.