What If It's All A Virus? 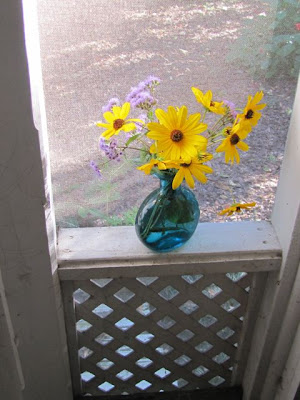 The sun came out and I went for a walk. That's what you're supposed to do, you know. Exercise.
I did it.
The air was thick with dragonflies, each on a mission of his or her own.
Yellow and purple flowers are blooming. These are the color of fall here. I picked a few and brought them home and put them into one of my favorite blue vases which shines like a jewel in the sun. I love colored glass. Cheap colored glass. Jewels you can use. That vase was in As I Am.
It held a potion.

Billy called me today. He told me about something that he'd done and he said, "If you tell anyone I told you this I'm going to say you're a liar."
And then he proceeded to tell me a completely hysterical story which started with the words, "So I found some of Shayla's jeans in the freezer," and went on from there.
I am not going to tell you the rest of the story but I did tell it to May and she laughed a lot.
Here's a picture of Billy I stole from the Facebook: 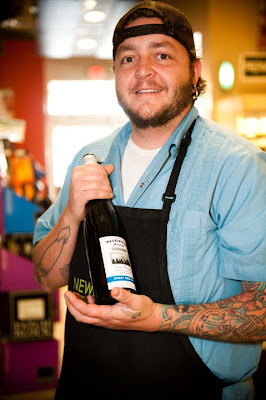 Is he cute or what? Handsome, too.
That's him at work. He works at the local New Leaf Market and he's in charge of wine and cheese or something like that. He's a manager of some sort. Every one loves Billy. You would too if you knew him. He makes me mixed tapes and shares his grandparents with me. He's married to Shayla who teaches "under-privileged" kids and who has red hair and they have a son named Waylon. Not only is Billy about the funniest person I know, he is also one of the smartest. And bravest.

The story he told me used the word "Bedazzled" in it too. That's all I'm going to say about that. I do not want to be called a liar.

So I went for that walk. I picked flowers. I saw dragonflies. I came home and picked up fallen branches. I talked to May and to Kathleen and Billy and Lily on the phone. I did some laundry. I took a bath. I read "Masque Of The Red Death out loud again. While I was in the bath tub. It wasn't quite as abysmal.

Mr. Moon came home and he was wearing a blue shirt and he is so handsome. Blue is a very good color on him. He changed into camo and went out to hunt buck with a bow. It is buck-bow season. There are so many different hunting seasons. I do not know why. Doe-bow, buck-bow, rifle-doe, rifle-buck, muzzle-loader this and that. As far as I know, there is not a season where you can take a deer in hand-to-hand combat. If there were, Mr. Moon would train for it.

It's been one of those days. One of those days where you get through it.
It's so hard to describe depression. And it is so hard to justify it when you have this jeweled, beautiful life. This BEDAZZLED life.
Look- depression has no desire to be justified. It just is. Maybe they will discover that it is a fucking virus like herpes and there are remissions and exacerbations. Maybe it only looks to be hereditary because you catch it a a young age from a parent. Maybe they will discover a vaccine. Or a remedy which does more than treat the symptoms. I think this is entirely possible.

A virus. The depression virus.

Maybe I'm talking through my ass.

Well, the sun is going down. Tomorrow will be a different day. It will be colder, that's for sure.
Take care, y'all and as Mr. Moon said in a note he left me once, "Stay warm like the place I have for you in my heart."