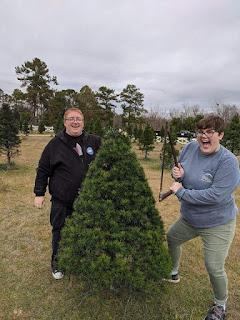 Today was the day that Hank and Rachel had scheduled to go to the little town north of here, Havana, and cut a Christmas tree at the Christmas tree farm. They invited us all to go and Lily was going to go just for the fun of it (they already have their tree) but Gibson seems to have some puking situation going on so she bowed out and of course, May was working.
Sigh...
That girl. She works her ass off.
But I got in my car and drove up to Havana and Jessie and her boys came in Vergil's truck so that she, too, could get a tree. It was a gray day and a bit gloomy but all was cheerful and bright at the Christmas tree farm. Lots of people were wearing their holiday clothes for picture taking and the boys were beside themselves with the excitement of it all. 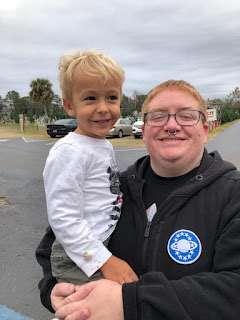 August was in the very best mood, as excited as a puppy on a walk in the woods. He had a chat with Uncle Hank about typewriters and he has been promised his very own typewriter which he's going to have to help fix up and then, he can type words. That's what he wants to do. Type words.

We had to look at every tree, of course. But that was fun. Measurements were taken and all sides of trees examined. 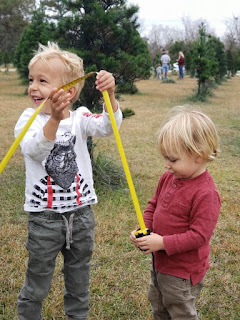 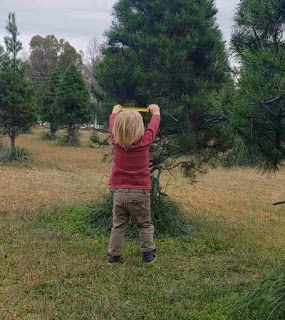 After a pretty good look-around, two trees were chosen. One for the Weatherfords, one for the Thigpen-Tullius family. Rachel and Jessie sawed their respective trees and we carried them back to the place where they shake and trim and wrap with the tree with netting because we are not weakified wimps who must use golf carts to haul our trees! No! We are STRONG! 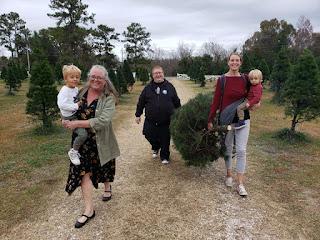 Well, some of us. August and Levon somehow needed to ride on hips. August claimed that he was tired and that, uh, his leg hurt. I didn't mind. Any time that boy lets me carry him I will gladly do it. He's still not very heavy although I tell him that he is and that I am just a strong grandmother.

Here's one of my favorite pictures of the day. 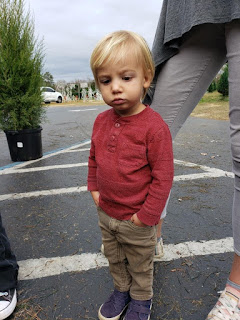 Levon was standing there like a man, hands in pockets and chewing gum like it was his job.
Our baby men. 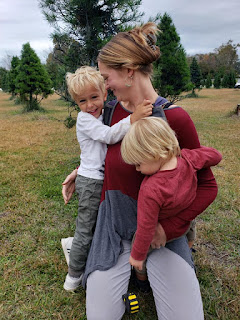 In the little place where you pay, they have various trees set up with ornaments for sale and the boys got to pick their own. Guess what Levon chose?
A front-end loader!
Which, before we got to Maria-Maria's, where we ate lunch, he had taken off the ornament string and turned it into a toy. Which was fine.

And yes, we ate lunch at Maria-Maria's, which was delicious as ever and helped a tiny bit with my visceral memories of Cozumel which start appearing this time of year. As usual I am having a hard time with Christmas. Haven't bought one present. I am sticking my head in the sand and singing la-la-la-la-la! as loudly as I can, fingers in ears.
I did sing a verse of Happy Christmas, War is Over to August while I carried him.
Mr. Moon is at his credit union's party right now and I am not there. I...just...couldn't do it.
He may tell them I was not feeling well. I don't know. As far as I care he could tell them the truth- that I have social anxiety and also, that I detest Christmas.
Despite the fun I had today- and it was fun, truly!- I am in a funk. That's all there is to it.
Eventually, I'll crawl out of it. I always do. But I swear to you that I am simply tired of feeling this way. One does tend to feel that this state of mind is as eternal and unchanging as the popularity of Dolly Parton when one is in the midst of it but again, I tell myself that no, this is not true.
And again- I don't really believe that.

I read a thing the other day on Facebook which is where all the fucking wisdom comes from these days that said, "One cannot be both grateful and depressed at the same time," and I thought, what a bunch of crap that is.
I consider my fortune and luck every day and know that I am as rich as anyone on earth with the things that truly matter. Not for one moment do I forget that. But it doesn't prevent me from being sad, too.
Days like today bring back every sadness, every failure, every flaw, every dream disappeared, even as I can pair every one of those with something beautiful.
Eh, well. Whatever. This is who I am and how I am.

Oh! Mr. Moon dispatched the two extra roosters this morning.
"It was not easy," he said.
He took them to No Man Lord. I asked him if NML had seemed glad to have them.
"Yes," he said. "He told me he was hungry."
Which made me too sad for words.

But right now I'm thinking about two Christmas trees, lovingly and carefully chosen, taken home and put up and decorated with lights and ornaments, of children enchanted by the magic of a tree in the house, the scent of pine, the pretty decorations, the sweet shining lights.
I am thinking of how grateful I am that I was there today to share in a little of that magical process and ritual.
And also, that someone who was hungry has something good to eat. And that the hens' lives will be so much easier now. It always comes down to the simplest things, doesn't it?
Light and love. Enough to eat. Warmth and shelter. Freedom from fear.

Why is this so hard?