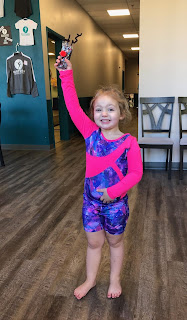 When I woke up this morning I already had a text from Lily saying that Maggie would like me to come to dance if I could and of course I could. I rushed around here and got a few things done and then drove to town and as always, I enjoyed it so much. It's amazing how much confidence all three of the children in that class have gotten. The parents joke about the first day. How there were tears and fears, weeping and gnashing of teeth.
Now they float along and do what their teacher asks. They point their toes and they tap, tap, tap, and they do summersaults and spins until sometimes one or two of them falls over and we watch on the video screen and cheer them on even though they can't hear us.
They come out of the studio to change their shoes from tap to ballet and then they come out after ballet to take off their shoes entirely for tumbling. Today when Maggie was changing into her ballet slippers she said, "Look, teacher! I can do it by myself!"
I loved that. "Teacher." What a beautiful word.
After class Teacher had special treats for them, Little Debbie brownies decorated to look like reindeer and Maggie did pose with hers but the smile was not entirely convincing.
Still, she tried.
After dance class I ran by Jessie's to drop off some bread and my not-being-used Christmas tree skirt. Levon was asleep and August was at school and Jessie asked if I'd like an espresso. I most certainly did and she made me one and we got to chat a little, sans children. I think that the last time that happened was when August was in utero. It was quite enjoyable!

I had decided that today would be the day that I would GET MY SHOPPING DONE!
And you know what? I think it is done. After I left Jessie's I went to the decidedly local Quarter Moon which is what you might call a hippie shop which sells some clothes and jewelry and Indian print bedspreads and funky things to hang from walls and doors and ceilings. They sell chopsticks and funny magnets and candles and Guatemalan bags and socks and night lights and tchotchkes from India and Mexico and it all smells delightfully of incense. I like to spend a few dollars there every Christmas because every town needs a good hippie store. Am I right?
The phrase "head shop" just came to mind and I haven't thought of head shops in years, not by that name anyway, but those of you who are as old as I am probably know exactly what I'm talking about and those of you are not as old as I am are probably thinking that they must have had something to do with sex but not really unless you count the flavored body oil that many of them carried.
Anyway, yes, the Quarter Moon smells like a head shop but I didn't notice any smoking apparatus which is odd in that medicinal marijuana is now legal in Florida and I'm sure that lots of people are still using it illegally as well as legally and what in hell are they smoking it out of?
I know, I know. Just kidding.
Sort of.
I wonder how the bong business is going.

After I left the Quarter Moon I stepped next door to a consignment shop which I'd never visited and I wanted to hang out there all day just to listen to the owner who was a complete hoot. I mean, I wanted to ask her if she'd be my best friend but I didn't. Another woman was there and was writing a check. The owner said, "Just make it out to The Blond Bitch."
"I can't do that!" said the woman.
"Well then, make it out to the Blond Bitch Goddess!" the owner said.
I didn't buy anything there but I'll go back just for the ambiance and the two darling doggies who greeted me when I walked in.

At this point I realized that I had to eat. My blood sugar had suddenly plummeted and so I took myself to Maria, Maria's which was just a few blocks away and had two delicious tacos which fixed me right up. And then, and THEN I had to enter the world of possible Christmas hell again but I girded my loins and pulled up my big girl panties and went to Marshall's where I found three more gifts and ta-da! That was all I needed! And the gifts don't suck! I would like those gifts!
Then to Costco and Publix and it was almost four when I got home but I was done and DONE!
I texted May when I left Costco: "I have bought the fruitcake so all is well."
May and I love fruitcake. I used to make my own but when I discovered Costco's fruitcake I stopped that nonsense. Their fruitcake is far superior to mine. Okay, not really but it sure is easier and it's damn good. I don't think anyone in the family really likes it very much but May and I make up for that with our unwavering devotion to it. One Christmas she and I ate so much that Lily cried and hid it from us.
I am not making that up.
She was still quite young and had never seen either May or me gorge ourselves on anything like that and it cracked the reality of her universe, I believe.
Now it's a favorite family story. And who knows? This year it could be Owen who cries and hides it from us.
He better not.

So that is that. And I am still quite cheerful although I am exhausted.
I still have to wrap presents and I do want to finish Maggie's nightgown. I took my measuring tape with me this morning to get some idea of how long it should be and how much elastic I need for the wrists. I tried to measure the child but she lost her mind.
"NO! NO!" she cried as I attempted to see how many inches around her little wrists are.
"Hmm..." said Lily. "Judging from that I'd say to make sure they're not too tight."
Noted!
And good advice for all garments as far as I'm concerned.

I might even set up my ancient nativity scene tomorrow.
Then again, I might not.
We shall see.