From The Mundane To The Celestial 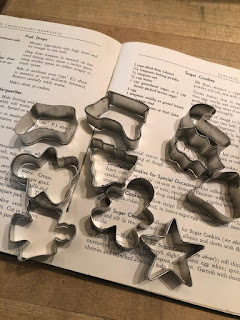 Well, the cookie plan came to fruition. This morning I made up a double recipe for sugar cookies out of my old, old cookbook, the one my mother learned to cook from. I have used this same recipe for a million and four years. I wrapped the dough in parchment paper and put it in the refrigerator to chill and then cleaned off the kitchen island. I took everything off of it and sprayed it down with vinegar and Fabuloso, of course, and then wiped and wiped it with a soapy rag and finally rinsed it. It was smooth as silk and ready to be used.
I got out my cookie cutters (amazing that I even knew where they were) and discovered that my Christmas cookie cutters were all tiny. What happened to my others? Who knows? Not me. No problem. Lily said she had some and she did.
Jessie and her boys got here first. I made the frosting that we would divide into small bowls and color for the decorating. Jessie brought some sprinkles, I had some too. August was crazy excited to begin this project. Far more excited than he was about my Christmas tree. I showed it to him and Levon and they took one look at it and August said, "It's little," and that was enough of that. I showed him an ornament that was made from a picture of Jessie when she was about three. He could not guess who it was. He and Levon both proclaimed that it was Maggie. I don't think they believed me when I told them that no, it was their mama.

Lily and her three got here and the cookie baking began. I dragged in the old bar stools so that there was one for everyone except Levon but he said he was wasn't big enough and wanted to sit in the high chair. He loves that high chair. So that worked out. At first everyone was very, very excited to get the party started and Jessie set them to mixing the food coloring into the frosting. Anything having to do with frosting is fun so that went well.
And then it was time to roll out the dough and cut the cookies and at first, everyone was interested in this project although after about five minutes, only Maggie remained while the boys disappeared off to the Glen Den to play reindeer games or something. Santa and elves were involved.
But Maggie was thrilled to help and Owen stuck around for a little while too. 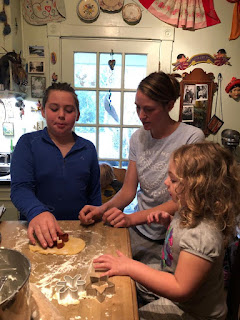 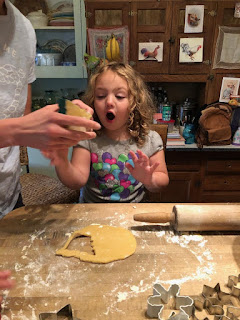 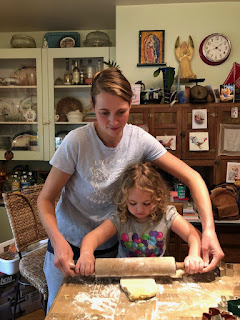 Jessie was so patient.
Lily had to go home because she was cooking food for a party they're going to tonight so it was just Jessie and me but Owen helped. He's so good with the kids. 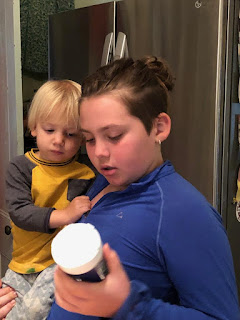 The cookies were rolled and cut and baked and allowed to cool a little bit and then everyone was called back in to do the artwork. This too, was thrilling for a little while. 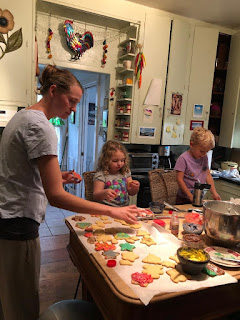 Levon wanted back in the highchair where he proceeded to not only decorate but eat a cookie. 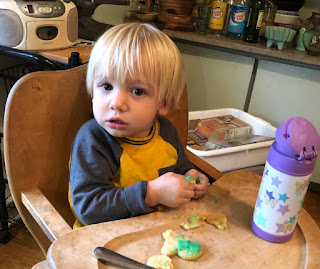 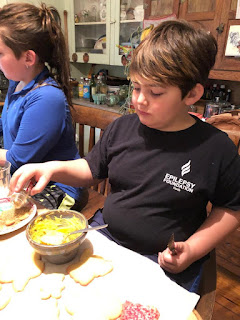 I am not sure how many cookies were eaten but there were tears from Magnolia when she was told that no, she could not decorate any more because she was going to get sick from all of the frosting she was eating. She went to the bathroom and cried until I went in and sat on the closed toilet and said, "Come here," and held my arms out to her and she let me hold her and she soon settled down and was ready to go play.

It was a messy, chaotic, sugary afternoon but eventually, all of the cookies were decorated in one form or another by either the children or Jessie or me. I ate one of the tiny ones and it tasted just exactly like they do every year which is to say, delicious.
Boppy came home in the middle of all of this and the boys talked him into playing Wii and then Jessie took her boys home and after I'd cleaned up the kitchen I took the Hartmanns to their house. The whole drive was spent with me and the boys discussing old cartoons that I had watched as a child and that they, too, had seen. Tom and Jerry, The Roadrunner, Yogi Bear, Rocky and Bullwinkle, Woody Woodpecker, Pepe le Pew, and so on and so forth and when we got to their house, Gibson asked me in all seriousness if there had been pencils and paper when I was a child. If there had been chairs. I assured him that there had been. We'd even had TV and airplanes and cars but no internet.
The funny thing is, is that I can remember my own brother being amazed that my mother had pencils and paper when she was a child. He thought that surely she'd written her lessons on slate.
How old our children and grandchildren must see us as! One step away from dinosaurs and surely we lived in caves and huts.
Well, I've lived in a hut or two in my life. Sort of. To be honest.

It was a good day. I felt like a grandmother for sure and for real. Even though my Christmas tree did not impress the young'uns, at least I had one. And this old house again rang with the footsteps of little running feet and shouts of excitement, and games of hide-and-seek were played (so many places to hide) and a Christmas ritual was reenacted. I had good chats with Owen who told me that talking about old cartoons with me was his favorite part of the day. And there are cookies to be set out for Santa on Christmas Eve and extra ones to eat, crisp and covered with sweet butter frosting and plenty of sprinkles. So many sprinkles. Bazillions of sprinkles.

I've been thinking on and off all day about it being the Solstice but I have not done one thing to honor that.
I'm pretty sure that the earth and the sun and the moon and the stars do not care at all.
It is starting to rain and I think it is going to rain for the next two days.
I honor that as I can feel myself the smallest part of this beautiful planet as it flies through space with its own atmosphere and oceans and deserts and mountains and valleys and rain forests and jungles and rivers and cities and its billions of people, each of us as important and as unimportant as the next.

Happy Solstice, y'all. It is truly winter and the days will grow longer, just as it has all been happening since before there were chairs or pencils, paper or the internet, huts or caves or dinosaurs or even black and white TV.

Let there be light.