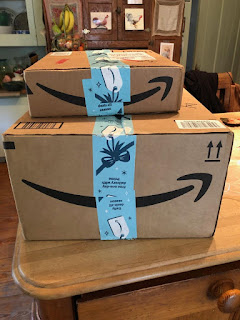 The children's presents arrived today and I picked them up at the post office. I brought them in and set them in the kitchen and then got dressed in my walking clothes and took a short walk- my first in weeks. I knew I needed to go. Not walking does me no good. No good at all. Not physically or mentally and I know it but despite that knowledge I can find ten good reasons every day not to do it.
I thought about a woman I'd known who used to say that exercise was like brushing her teeth. It simply had to be done.
And it had to be done.
It was an okay walk. Nothing very new seemed to be going on in the neighborhood although when I passed the little enclave where No Man Lord lives there seemed to be a small gathering. There was a fire and a few kids and a mother holding a baby and one man was giving another man a shave while some other guys were standing around talking. No one seemed to notice my passing but I waved anyway.

I decided that today would be my de-Christmasing day and so it was. I took the lights and ornaments off the tree and packaged them up carefully, wrapping them in tissue paper and putting them in the bag I've been using for years for that purpose. I unwrapped the string of lights very carefully and wrapped them around an old paper tube so that they'll be ready for whenever I do it all again.
If I do.
I put the little nativity scene back in its bag and I carried them all upstairs and put them in the closet and then I opened up the boxes of toys and wrapped them and then carried all of the wrapping paper and bows and ribbons and tags upstairs and set them alongside the decorations. My big grapevine wreath with the cardinal is still on the porch and I'll leave that for awhile. I like it.

I made the decision this morning to keep my Le Creuset pot and pan that my husband gave me for Christmas. They really are beautiful and thoughtful gifts and the fact is that although I do not need them, I will enjoy them and their quality for the rest of my life. I've never been one for fancy kitchen stuff but I do insist on decent cookware. My stack of cast iron skillets and pots is my joy and pride. My knives may not be the best but they are good and I keep them sharp. There are plenty of kitchen tools that one may skimp on as to quality but there are some that any cook deserves to have the best she can afford. I explained to Mr. Moon a long time ago that these things are my tools. My pots, my knives, my food processor, my mixer, my bowls and my casserole dishes and baking sheets. He immediately understood- he, too, has his tools and he knows the value of quality. But I have to know that I will be using what I buy. Some things I use almost daily, some perhaps only a few times a month, but I like knowing that when I do need them, they are there. I may not have a souffle dish or a crepe pan but I damn sure have a stock pot, a wok.
And I have acquired a lot of these things slowly, over many years, a lot of them from thrift stores. I keep an eye out for the good stuff. The pot I used for decades for soups and stews and all sorts of cooking was given to me by my brother who found a returned set of good pots in a dumpster at a department store where he was working. It is as fine now as it was then.
So for me to accept the gift of a pot and of a pan that cost as much together as probably all of my cooking utensils was huge for me.
But as my husband said, "These are your tools." 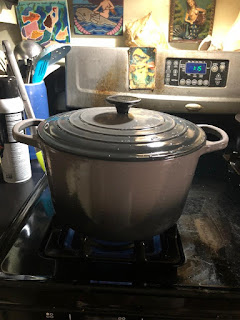 And thus, I peeled off the labels and washed them both with warm soapy water and set this beauty on my stove and poured stock in it that I had saved from when I cooked the chicken two days ago and added the bony remains of a chicken I'd roasted a few days before that along with a frozen chicken thigh and a breast and I simmered them all day with garlic.
And every time I opened the heavy lid to peek inside to give a little stir with a wooden spoon, to add some celery salt, celery seed, it made me happy.

Here's something else that made me happy. 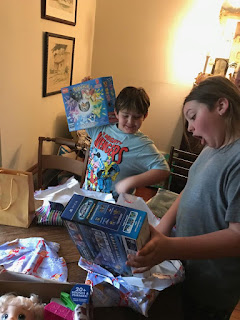 Lily brought the kids over and despite yesterday's giant gift haul, they were as excited to open these presents as if they were the only ones they'd gotten.
Don't even ask me what they were. Lily sent me the links to buy them and I did.
She obviously knows her boys.
Gibson gave me about a hundred kisses. Owen hugged me and hugged me. They wanted to go home right that second to play with their new things whatever those new things are.
And Magnolia?
Okay. A doll I understand. But Baby Alive?
Turns out that this Baby Alive can not only talk when you mash her tummy, but she comes with some Play Doh and a little press that you can make noodles with to FEED THE DOLL who sucks them in with a slurpy sound and says things like "Yummy, Mommy! More noodles!" 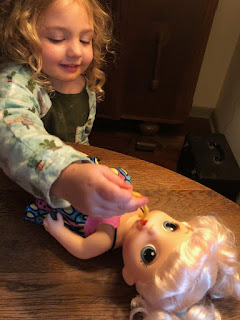 So what happens with the Play Doh noodles? you might ask.
Well, I'll tell you- Baby Alive has an extremely fast digestive system and after a few noodles have been slurped says, "My diaper needs changing!" Mommy then checks the baby's diaper to find that the noodles are right there!
I cannot imagine that Baby Alive is getting much nutritional value out of such quickly passed Play Doh but what the heck?
It's pretty much just like the Betsy Wetsy dolls that little girls my age all begged for.
Except you know- poop instead of pee.

It's a brave new world, y'all.
Although not really that new to be honest.

And the creepiness factor seems to be a continuing issue.

But you know what? Maggie will have a lot of fun with that doll even though I have a feeling that like a lot of little girls, including me, she will always end up loving the dolls that do nothing but allow themselves to be cuddled the most. I had a Chatty Cathy and after about an hour, she was boring as hell. Not much of a real conversationalist, that Cathy. She felt more like a machine than a baby.
And let's face it- Maggie's still going to create entire families out of salt and pepper shakers.

So that was that and off they went to play with their new toys and I swept my house, the metaphorical meaning not lost on me, and did laundry and enjoyed stirring my broth in my new pot.

I guess that's it. My soup now has vegetables and rice in it and I'm about to go squeeze lemon juice into it.

Happy Boxing Day, y'all. I have heard Boxing Day described as a cat's favorite day of the year which tickles me.