The Telling Day Will Be Here Soon 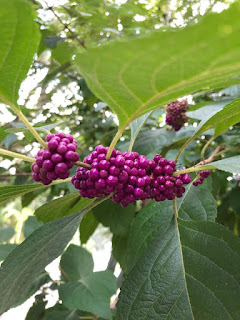 The beauty berries are starting to show their mauvey, glossy glory and the golden orb weavers are claiming their territories for their final days and egg laying. 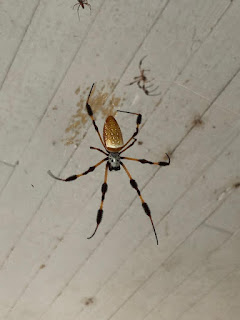 This pretty little thing has one boyfriend. He's up there at the very top. Not the dangling one you see behind her. I believe that one is deceased. This is what was going on when I watered the front porch plants and I rudely broke her web so that I could pass by with the hose. She will rebuild.

Last night our power went out from nine until about eleven thirty. There was hardly any rain and not much wind going on. I'm not sure what the power outage source was. We laughed and joked about how it's time to get the generator ready and I bitched about having to go to bed without the fan blowing on me. I am addicted to that fan. After a few hours the air conditioned house begins to heat up and get humid and it all reminded me of hurricanes and how it feels during and after when the power is gone and we are stumbling about in the semi-darkness as this house was built to trap and hold coolness, not for bright light in all of the rooms. We go about with miner's lamps and move camp lanterns from room to room and that is what we did last night. I fell asleep but woke up just a few minutes later, my husband rambling about the house doing something until I realized that the power was back on and he was turning out lights and setting clocks.
I woke up this morning, unsettled. I hate this season of storms and listening to experts about possible hurricane formations and paths and forecasts. They are looking at this one now. 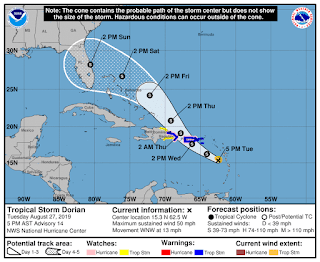 Dorian. Tropical Storm Dorian. Oh, Dorian- what chu gonna do? Are you going to dance with the wind above that hot summer ocean and spin and turn until you make of yourselves a baby hurricane? And if you do how fast will that baby grow and where will that baby go?
My favorite local meteorologist always cautions about too-early predictions.
"I'd rather be right than first," he always says. And he hates that "cone of uncertainty." He says that with this one, Thursday will be "the telling day."
The power went out again this afternoon. Only for an hour and a half. "Caused by equip. damage. Approx 675 customers impacted," Duke Energy informed me via text when the power came back on.
This all feels too much like the warm-up exercises for the real thing.

I got nothing done today. A short walk. A little laundry. Just as I was about to lay out the pattern for Magnolia's dress, the electricity flickered and flickered and flickered and stopped. I said fuck it and laid down on the bed with Jack and read in the semi-darkness as rain came down outside.
But then it came back on and I got up after a nap and here are Darla and Dottie in the jungle of my kitchen bed. You can see that the pinecone lilies have emerged and in the next few weeks they will turn as scarlet as a cardinal. 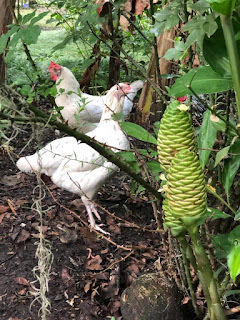 I have finally named the four youngest birds. The one I think is a rooster I am going to call EJ for Elvis, Junior. May he live up to that holy name. The hen (this is all yet to be completely proven) who looks like him will be Elvira which was what we named Elvis when we thought he was a girl. And the two goldens are Sissy and Sally.
And it's all silly because no one will actually know or care but me.

Yesterday Lily texted to ask if I'd like some Chanterelle mushrooms that they found in their yard. I've never cooked wild mushrooms if you want to know the truth. Well, maybe once I cooked some that Vergil brought over but I'm not sure about that. But I told Lily that I would like them and so tonight I am going to make a mushroom sauce to go over a venison roast that I'm cooking. 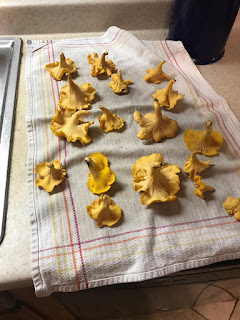 Mr. Moon is a bit afraid that I'm going to kill him. I told him that if he dies, I will too.
I am sure that he finds this comforting.
As we speak he is working on the generator. I suppose we need to get our act together regarding batteries and flashlights. As to food- I am not worried in case of a storm. For one thing, Publix always opens back up almost immediately after storms pass. They all have generators. Besides, we can keep our refrigerator going with our own much smaller generator. It will run that and a few lights and most importantly- my fan. I have a gas stove. We are on "city water" instead of a well with a pump and they always manage to keep that going.
One supposes that a trip to Costco to buy extra vodka and beer is in order though.
I'll think about that on Thursday, the telling day.

And tomorrow my granddaughter is coming over for a little visit. Lily and Lauren have appointments with our darling Melissa and I have offered to keep the girl so that they can do that and have a leisurely lunch after. I need some time with that golden haired woman-baby.

It is drizzling. It is the very end of August. Here we are again. It seems like time and the seasons pass in a breath, in a dream, in a dance, in a kiss, in the slap of cold river water as we dive under the surface with our eyes open to see in a blurry haze another world, right there, all the time even as we go on about our business pretending and forgetting that it is there at all.

Life is so mysterious even when we keep our eyes open.