I have been an old-lady-domestic-crone today.
So to speak.
I took a walk and it about killed me but didn't and I hung laundry on the line and tried once again to clean my shower doors. Remember that project? I tried everything and nothing did the least bit of good at getting the water stains off. I finally bought this horrible chemical spray that's supposed to take the paint off a dump truck but I never used it because I thought that it would kill me to breathe the fumes and/or touch it but yesterday I finally got it out and tried using it and
A. I could barely smell it, and
B. It didn't burn my skin, and
C. It didn't do a thing

I used it twice yesterday and this morning I gave it another go and even scrubbed but no, the water stains are still there and will be until Jesus returns.
And that was my last hope!

The other day Lily discovered that she had a couple of sand pear trees on her property. Florida sand pears are an Asian variety that are somewhat more rounded than the pears we're used to and their skins are sort of ugly looking and they are hard like the hardest apples. 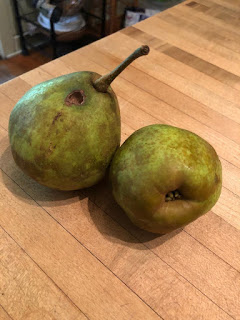 They're called "sand" pears because they have a grit to them and you can peel them and eat them sliced, raw, but I love them for cooking. They are substantial! So Lily brought me a bag full yesterday and today I got out the canning kettle and perused recipes for preserved sand pears and then I peeled and sliced them while the water was heating to sterilize my canning jars. I sort of winged it, adding sugar and a little water and lemon juice and a small bit of grated ginger and cinnamon to the mess and boiled those suckers down until there was a nice syrup and the pears were tender.
The big half pot of this concoction cooked down into four almost-full pints and I kettle-canned them and although that's a pitiful amount I think they'll be delicious. 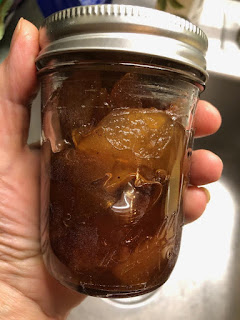 The pears make beautiful pies. I can also imagine baked pears with blue cheese.
It truly is a luxurious indulgence to spend hours making preserves like this. No one in the world NEEDS pear preserves and once you add in the cost of sugar you could probably buy them cheaper at the grocery store. But those four little jars give me a sense of accomplishment that no store-bought preserves ever will and I like to think of the early Florida women who, in the heat of the summer, canned the fruit that grew around here so that in winter their families would have a bit of sweetness to put on their daily biscuits or corn bread.

So it's been a typical August day for me in North Florida. Hot, humid as fuck, laundry off the line, clean sheets on the bed, water-stained glass shower doors, hair still wet from a morning walk at 7:00 p.m., more pretty brown and green eggs in the wooden bowl on the counter, wild grapes fallen onto the sidewalk from the vines in the trees above, a little bit of fruit and history preserved in Ball jars. 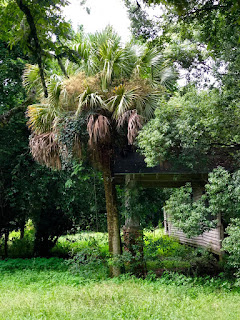 That's an abandoned palm tree beside an abandoned house three doors down from me if you count the church next door. Which I do because it has a door.

Fun fact: I finally counted and there are NINE churches in the six mile drive to the west of me. To put this into perspective- there probably aren't thirty houses on that route.