A Bit Of Melancholy On A Beautiful Day

When I woke up this morning it was notably cooler and the air was drier. A taste of fall. A false taste, of course, but still- a little lick of the delicious promise of what's to come. I took a walk. I washed the sheets and did other laundry and hung it all on the line. Maurice, as if she was delighting in the luxuriousness of the cooler and drier air as much as I was, lounged beneath the clothesline, stretching and relaxing in the shadows and light. 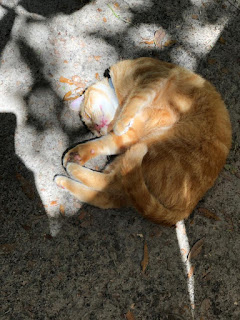 The sun has given my cat an extra tail. Can you see it?

I had two books to return to the library in Monticello so I made a solo trip which felt strange. I always go with little ones and their mommies for toddler story hour. It was quiet and uneventful and Terez was not there. I returned my books and found another to check out. I noticed that someone had left a big box of sand pears at the door for whoever wanted them. I thought about getting a bag out of the car and taking some but I didn't. Maybe someone else will need them.

And then I went "downtown" and did a little shopping which again felt strange and although not lonely, it was definitely different being alone. I went to Wag the Dog and found no treasures and to a vintage shop and there was nothing that that pleased me. The scent of potpourri was overwhelming and there was a little dog on a couch with the owner who said that every time the door opens the dog tries to escape and I thought, "So would I. So would I."
And then on to an antique store where I've been shopping for years and I swear- they have the same things they had a decade ago. At least in some cases. I did find three bar stool chairs that I think Mr. Moon will go buy tomorrow in the truck. The ones we have are partially woven raffia and are unraveling and the children and the cats have been helping that process along but these are oak and sturdy. 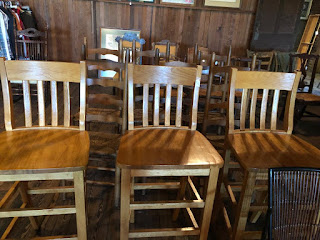 They will probably outlive me and cost eighty dollars for the three of them. They are not antiques but they are what I've been looking for.
I get overwhelmed by antique stores these days. Just so much stuff. And so much of it weird and unattractive and impractical and no one in their right mind would want it. Old tools that are special only in that they're probably over thirty years old and are rusty. Pictures that someone's aunt painted and which should have been thrown out fifty years ago. Skillets that were not good skillets when they were new and which are definitely not worth cooking in now. Ugly glassware, junky jewelry, pieces of quilts made of what appear to be the remains of polyester pants suits in lurid colors. Of course there are pieces I'd love to own. Beautiful old sofas and tables and desks and dressers but I have all of those things I need. It's odd to be sixty-five years old. I have things that are not perfect in any way but they do. They do. And I doubt I'll ever replace them at this stage of my life. And I have some beautiful things as well and I appreciate them but I don't need more.

Sometimes, oddly enough, I have a wild urge to just move and leave everything behind. All of it. Find a place where the spaces are bare and simple and the lines are clean. Where I could make a new life within new walls, walk on new floors. But there are things I would miss too much. The old boards of the floors of this house. The walls that have sheltered so many for a hundred and sixty years. Its porches and hiding places for spiders and for grandchildren.
Ah, let's face it- I'll never do that until they put me in the home and hopefully by then I won't know enough to give a shit.

I went to the farmer's market where big sturdy women carry around crates and boxes of fruit and vegetables, where they have refrigerators with shelled field peas and smoked local bacon and sausage and basil and yard eggs. Three dollars and ninety-nine cents a dozen! My hens are worth a fortune! I got some green peanuts and some squash. I came home and boiled the peanuts in water as salty as the Dead Sea for my husband and maybe for Jessie, too, who will be home tomorrow and who loves them.

And the storm? Ah, it grows stronger and it goes slower, sucking up the heat and power of the Atlantic. They are still not settled on a determined path and so it goes minute by minute, hour by hour, update by update. The latest projections show it possibly going up the east coast of Florida instead of crossing the state but no one knows for sure yet. It looks like it's definitely going to smash into the Bahamas and that is frightening. You can't totally evacuate an island. My cousin's daughter lives there with her two children and I think of how her mother must be worrying. How SHE must be worrying. One of the old men in the antique store today is certain that it's going to cut right across Florida, recharge in the Gulf and hit the state at Destin. I hope not. That whole area of the panhandle is still not nearly recovered from Hurricane Michael and with Trump diverting funds from FEMA to his imaginary wall, it never will recover. Or at least not any time soon.

I have to go make supper.

I hope you're having a decent Friday.