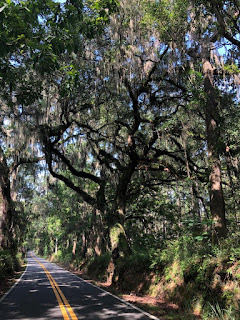 And that's why I walk on White House Road when I can. The whole road does not look like that unfortunately, but enough of it does to make my heart rise up to the tops of those trees and beyond even in this sweltering heat. 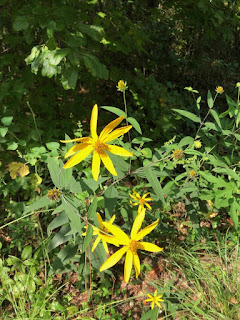 There is beauty closer to the ground as well. I love the ditch ferns and the wildflowers, the tiny caves in the hard red clay banks that line the road where I am sure that many critters have their dens and where the roots of the trees that grow in that clay are exposed.
I did three miles today which is not much but in this heat that's probably all I need to do. I'm pissed off because my Map My Walk app isn't functioning correctly. The milage is off. I've done that walk enough times to know my markers for my miles and it's telling me that I've walked a mile in thirteen minutes when I know it's only been, at the most, three quarters of a mile. I'm not a slow walker but I do not do thirteen-minute miles. Anyway, once again I survived.

When Mr. Moon cut up the pecan branch on Sunday I told him I'd clean up and clear the bed near the house where the branch had smashed a bunch of elephant ears. I decided to do that today and although the whole thing is probably about ten feet long and four feet wide it took me forever. Not because there was much to do but because this heat makes movement a sort of torture. I moved over to the camellia bed to pull up some GDF (god damn fucking) Beauty Bower and found myself not able to take one more step to kneel and pull one last sprout. It...was...just...too...much. Even as I left it in the dirt I knew I was being absurd.
I did manage to wheel the garden cart to the burn pile and dump it and then I had to come in and cool off again before I could go back out and pick green beans and field peas.
And that was IT.
Oh, well, besides hanging laundry and then bringing it in.

Well, at least we're not in a complete drought but we got no rain today. I expect the hurricane lilies will be popping up soon with their preternaturally fast-growing stalks, their alien bloom.

Turns out that the boys' bus ride situation was not restricted to their bus. Here's the headline from the Tallahassee Democrat this morning: 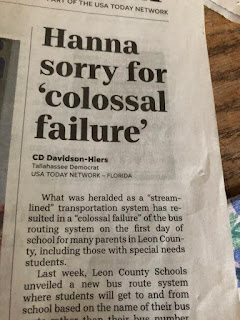 I texted the boys this afternoon to see how school was going which engendered this text conversation with Lily. 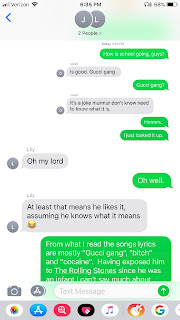 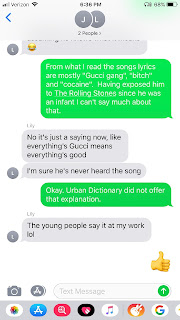 And as Lily says, at least that means he likes it.
I love how he says that I don't need to know. Haven't heard from Gibson yet but I hope he's feeling Gucci gang about it all too. He has a male teacher this year and I like that idea. Lily has signed him up for boys' hip-hop dance classes and also Maggie for ballet. Maggie had been begging to take ballet and now she will. It would make my heart so happy if both of them loved those classes. When I was a little girl I wanted nothing more in the world than to take ballet but there were no classes in Roseland or Sebastian and by the time we moved to Winter Haven there was way too much going on for anyone to have time to make that happen.
Oh well.
I doubt I'd trade the dirt roads and river docks, jungle and Tarzan dreams of my childhood for ballet classes.

And that's about it. Mr. Moon is on his way home. I need to get dinner started.
I'm sorry I have no deep thoughts to share but it's just too GDF hot to think much at all.