In Which I Have Adventures With My Babies 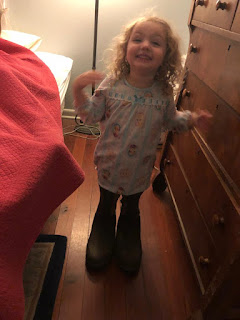 Lord, child, it's been a day. And a night. All went very, very well except for the small amount of time I could not find Maggie this morning and the kitchen door was open meaning she'd taken off somewhere and I had a slight heart attack. Turns out she'd gone to sit in my car and was quite surprised that I'd been upset when I couldn't find her.
Children.
Anyway, that picture is what Magnolia June looks like wearing a pair of her grandfather's boots. They are almost as long as she is tall.

We had a very good evening. The spaghetti and meat balls were terrific and so was the bread AND the purple cows. For those of you who do not know, purple cows are the traditional spend-the-night dessert at MerMer and Bop's house. They are made of sherbet, ginger-ale, and grape juice. Last night's even had a little whipped cream on top. Only the best for my grands. 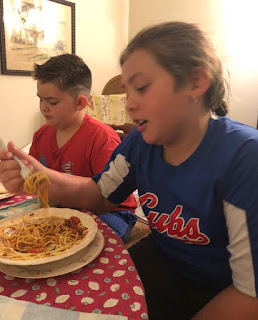 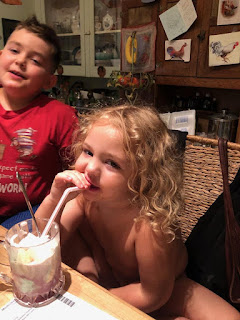 Then there were baths AND showers and as bedtimes always go, things got a bit chaotic. Maggie wanted to sleep in what she calls "Levon's bed" which is the Pack'n'Play and she demonstrated that she fit into it and I said, "Well, why not?" and after stories and kisses and some protesting from Maggie the lights went out and she only got up a few times. Unbeknownst to me she ended up in bed with her brothers and they both complained that they did not get very good sleep due to that. We were discussing this with Lily later on today and she said, "Well, I slept like a baby," and Owen said, "I slept ON a baby."
They woke up at a fairly reasonable hour and Mr. Moon had already left to go to the gym and to work and Maggie began immediately wanting to go outside and find Jack so that she could pet him and she wanted to go check for eggs but I convinced her to wait a bit and she helped me unload the dishwasher and I started the breakfast and we did go let the chickens out but we didn't see Jack. Breakfast was eaten, bacon and sweet potato and banana pancakes, and cleaned up too and by the time everything had been accomplished around here that needed to be accomplished and all of us were dressed and Maggie had been lost and then found and laundry dealt with and so on and so forth, it was 10:30 and we drove over to their house where we got in Lily's car and went to town to buy school shoes which is now a tradition. Owen is no longer able to wear kid-sizes but wears a man's size 8.
Hoo-boy.
Everyone found shoes they liked, even Maggie although she's not going to go to school this year, and we went to lunch at a Chinese/Fusion buffet joint (not Tan's) and it was pretty good. You can't beat a place where you can get sushi AND fried chicken AND macaroni and cheese AND delicious hot and sour soup AND boiled shrimp AND about a million other things.
Then- off to the museum!
I had somehow left my phone on my car in Lily's yard so couldn't take any pictures but Lily took some and sent me these. 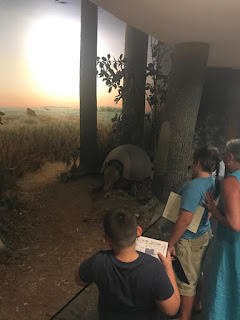 It may be hard to see but this is the giant armadillo display. I love that thing. Nothing enchants me more than the idea of an armadillo the size of a Volkswagen (which some were) trundling and snuffling through the Florida palmettos. The child in me thinks that maybe, just maybe, there are still a few of these prehistoric beasts that are just so shy and wily that they've never been spotted. 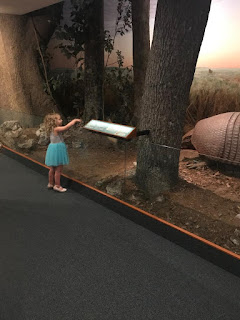 My granddaughter was fascinated by this one too. It occasionally moves its head from right to left and back again and she waited patiently for it to do so. 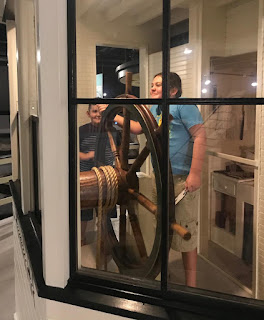 Here's Owen and Gibson at the helm of the river boat. 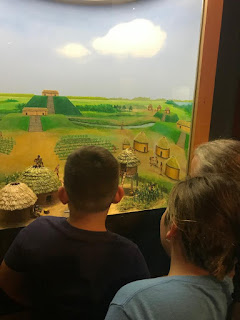 Here we are, looking at a diorama of early Americans and a village of theirs. I love a diorama. They have some life-sized ones there too and I just want to stand and stare at them forever.

They have a loft-room in the museum called "Grandmother's Attic" where they keep a lot of old stuff that isn't part of the museum's collection but which kids can play with. This is always the favorite part for children. 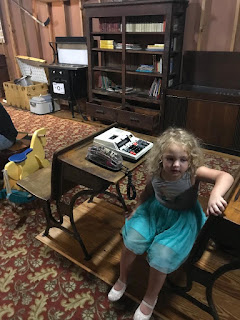 Here's Magnolia sitting at a desk with a telephone and a calculator. Owen especially loved that. He said that he wished I had an attic with things like this. I pointed out that I do have old phones and they play with them all the time and that I was sorry but I'd thrown out the calculator although come to think of it, it may be around here somewhere. Gibson sat at a switchboard operator's desk and he and Owen communicated vital information.

I haven't gotten the picture of the kids with the mastodon skeleton yet but when I do I'll add a lagniappe. I just love that mastodon. I stood and studied it for quite awhile before moving on and threw it a kiss before I went to the next exhibit.

Here's another one of my favorite displays. 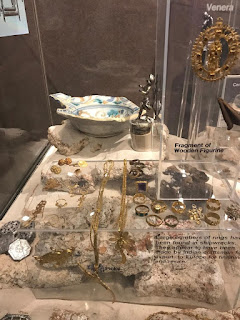 Treasures rescued from shipwrecks. Did you know that back a long time ago there were people who lived on the coasts of Florida who made their living by selling what they scavenged and salvaged from the beaches? Not so much Spanish treasure but mostly practical items and building materials from the wrecks of ships. Hurricanes ain't no joke. But look at that jewelry! I want all of it! I also want the china and also the pottery made by the native Americans that they've found.

What a wonderful time! The website for the museum can be found HERE.

After about an hour, I hit the wall. I was exhausted and frankly, everyone else was too.
We did a quick stop in the gift shop but nothing was purchased as had been made clear before we stepped foot into the place. There were protestations but no tantrums so I consider that a great success.

We drove on back to Lily's house and I got my car and came home and almost immediately fell on my bed and took an hour's nap. Fuck the chores I haven't done today- they will be here to do tomorrow.

It was a great day and I am most grateful for it. I had so much fun with my grandchildren. So many hugs, so many laughs, so much excitement and sweetness.
It is approximately 208 degrees F here with a heat index of approximately 4009 but so far my chickens have not roasted in their feathers and the creeks are not boiling. El Nino has disappeared which means that the chance of hurricanes has just increased by a large measure and they are predicting that the rest of the season, which lasts until November 30, will be very active. I saw that there were tornadoes in Europe and I can't even bring myself to discuss what's going on with the polar ice. It's just too damn horrifying.
But for right now, this very day, I have been able to stick my head in the sand and love my life and the parts of it that I love the most are so deeply genuine and authentic and so deeply felt in my heart that I am glad to be alive, glad to be who I am.
These are not days I take lightly. Not now. Not any time. Not ever.