This Is Not Hyperbole

So much today. So much and all of it good. I am not kidding you. All of it.
We rented our scooter from the same place we always rent it and it takes hours of negotiations and I just looked up at the trees and was happy the entire time. Found some volunteer tiny tomatoes growing on a fence, picked a few, ate them. They were delicious.
I love being on the back of the scooter behind my husband, driving through the streets and neighborhoods and beside the sea. There is a freedom to it, and the air and the smells are offered immediately and then we pass and they are replaced by others.

While we were outside before sunset after  our nap the most exciting thing happened. A pilot boat appeared, nudging, it would seem, a huge sailboat. There was bumping in the high seas and then a line was thrown off the stern of the sailboat and the pilot boat towed it backwards to an area a few hundred feet from the boat lift and dry-storage place next door. 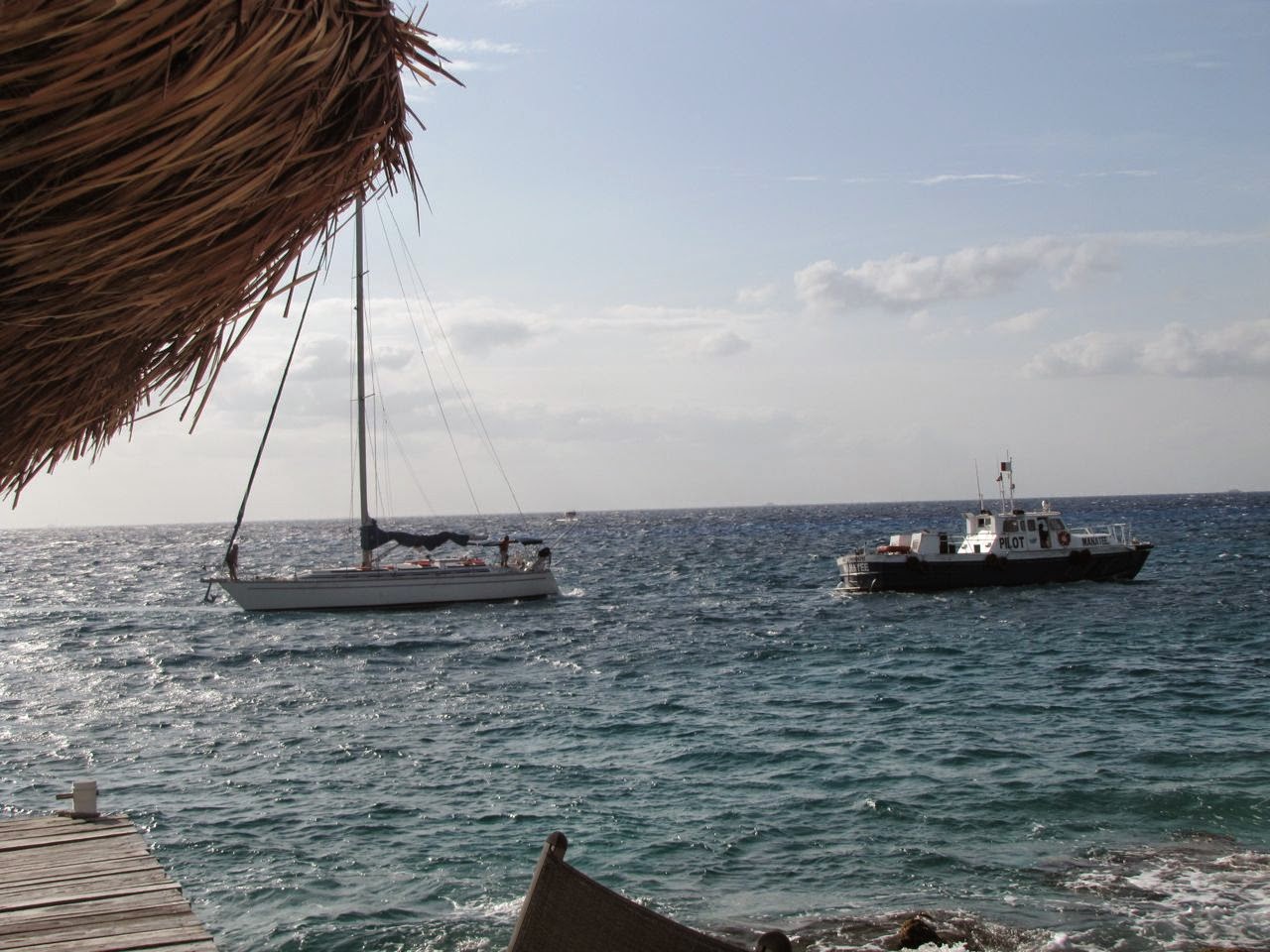 And then it chugged off into the distance, leaving the sailboat to its own crew's devices. A group of men, employees at the storage place I suppose, gathered and by remote control moved a huge hoist into place. 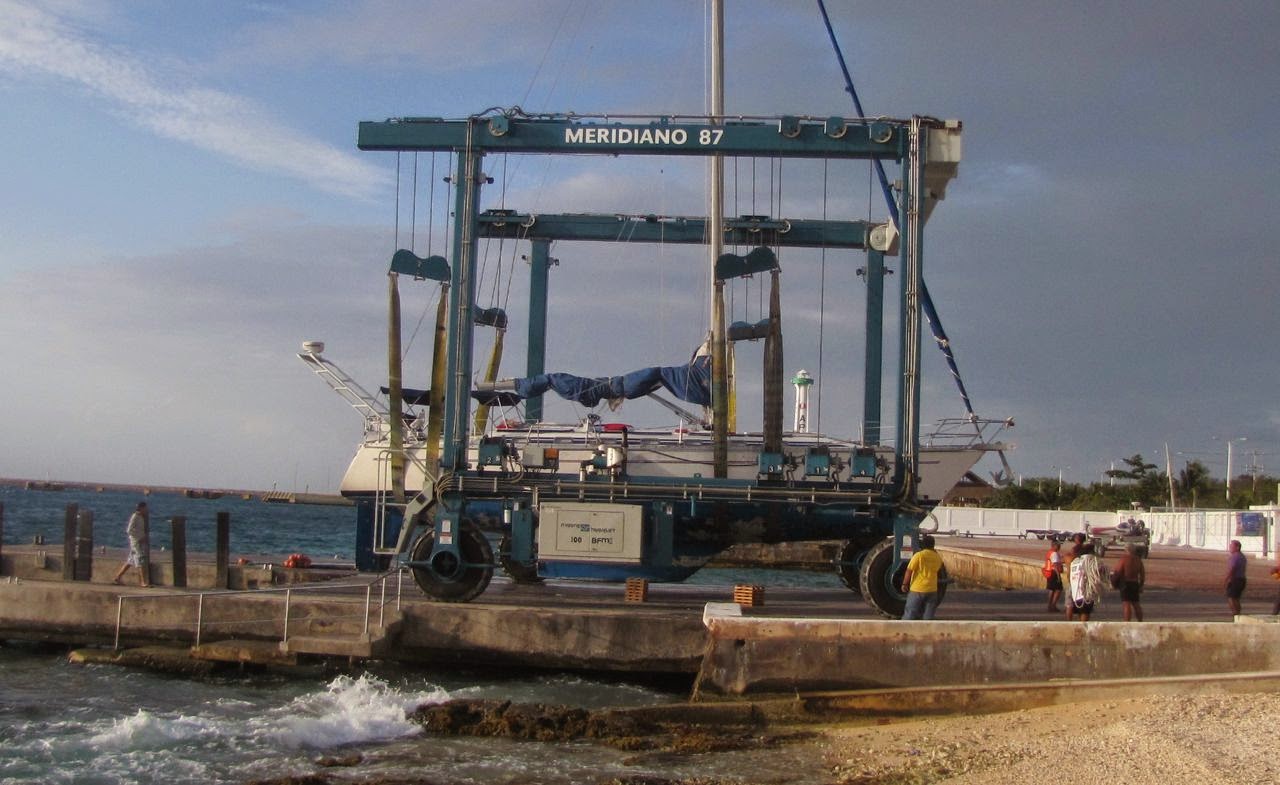 A man whom I am thinking was the captain and not the owner of the boat paced the dock and put his head into his hands and paced some more. He was frantic. 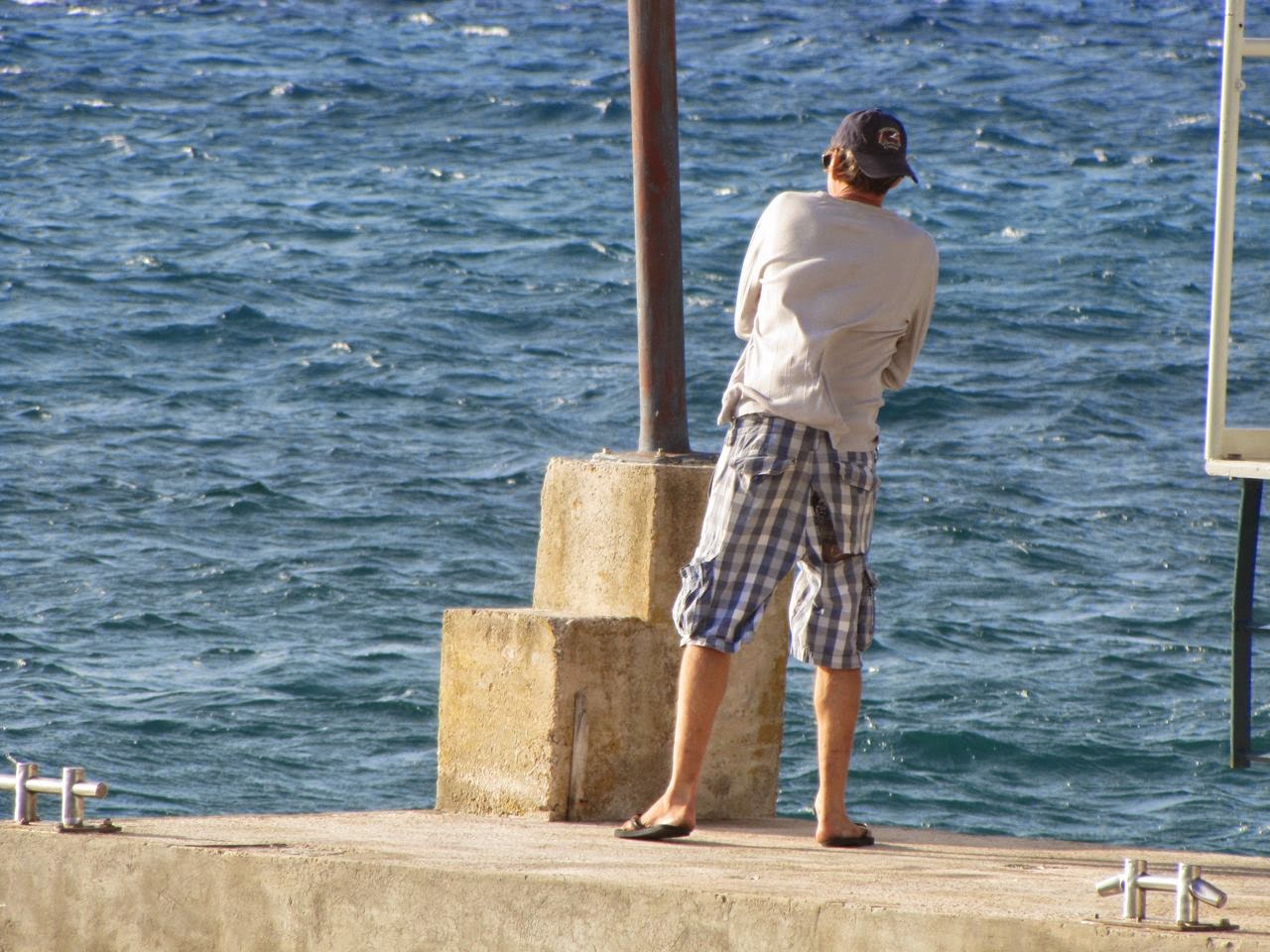 Mr. Moon and I watched for well over an hour as the boat was rescued. It obviously needed to be pulled from the water as soon as possible and I knew, I KNEW that the Mayans would do the job. 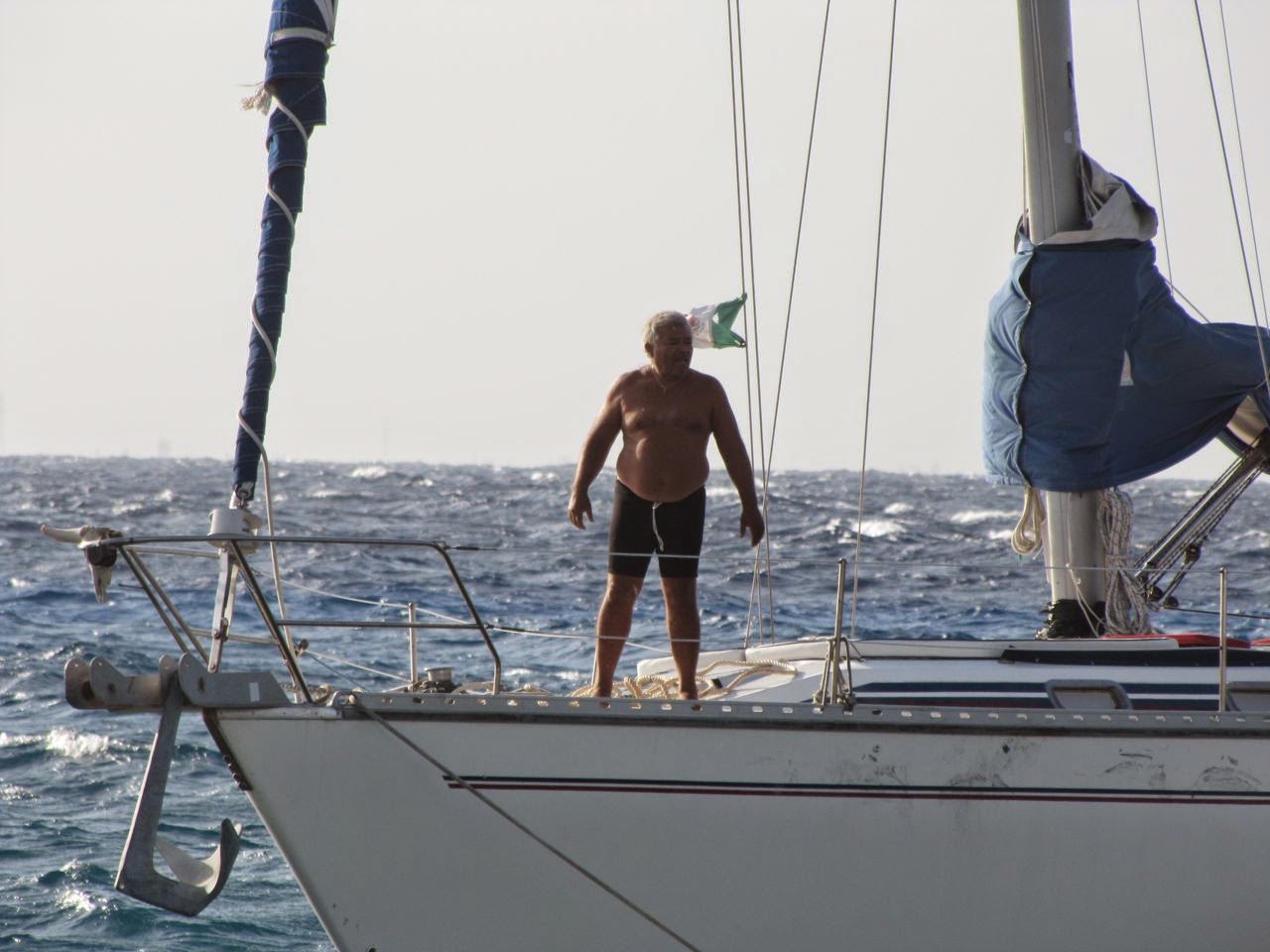 A diver went into the water at one point, the rough, roiling water, to swim a line from the boat to the men on the dock. He was in the water for almost an hour with nothing but fins and snorkel and when he got out, I was amazed to see that he wasn't some young diving cowboy but an older man and I wanted to kiss him and give him a medal or a trident or something. A beer and a shot of rum, at the very least. The way he walked spoke of exhaustion and the presumed captain hugged him tightly to him.

The boat was pulled, first by the men 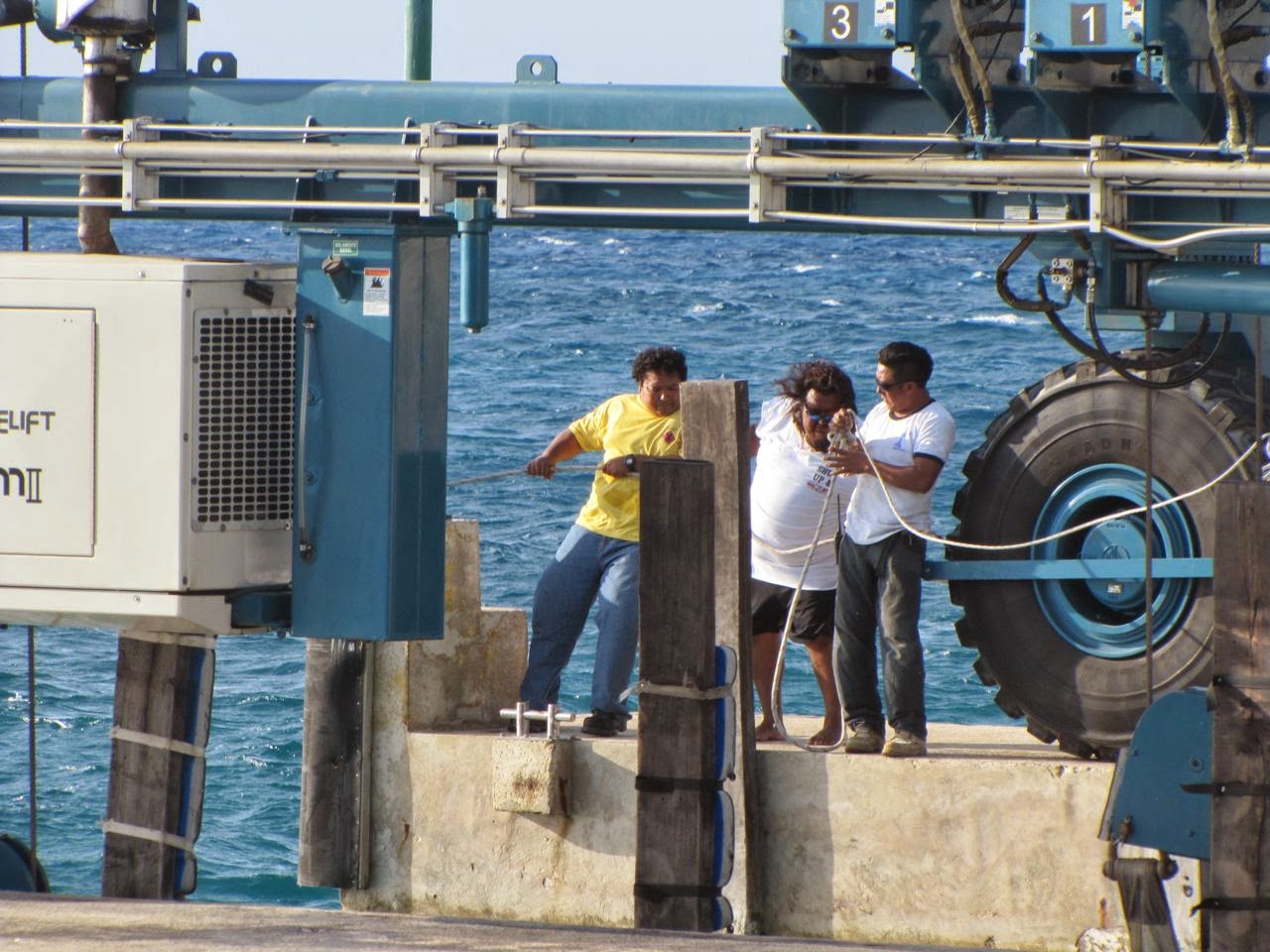 and then the line was attached to a large van and slowly and with great care the boat was pulled into position without further damage and the great bands of the hoist cradled it and they pulled it up and out of the water and the keel had been damaged badly and the prop was mangled metal. I suppose it had run into a reef. And it was hauled off and all was well and I knew the Mayans would do it and they did.
They are the Vikings of the new world and the sea is their universe and they are the masters of it. They look as natural on it and in it as do the fishes and the dolphins. I have huge respect for them.

And then came the sunset. 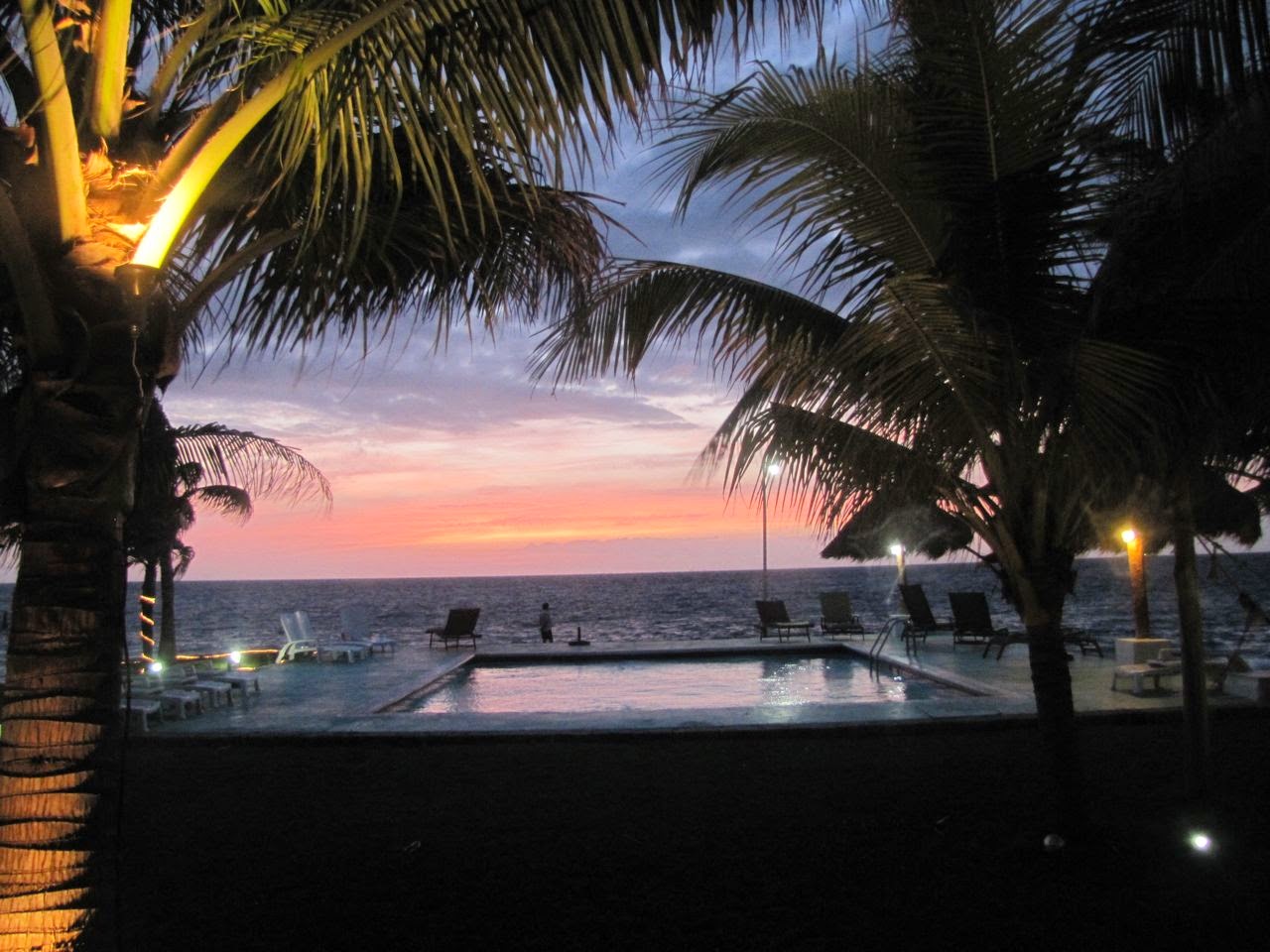 And while it was happening, I spoke to a lady who works here and it was one of those women-heart-conversations where age or nationality or culture or nothing matters but that we are women and there we were, watching the sunset and she has a four-year old son and her mama helps her.
"Mothers are wonderful," she said.
Of course I cried. Of course.

Here. From my journal tonight. 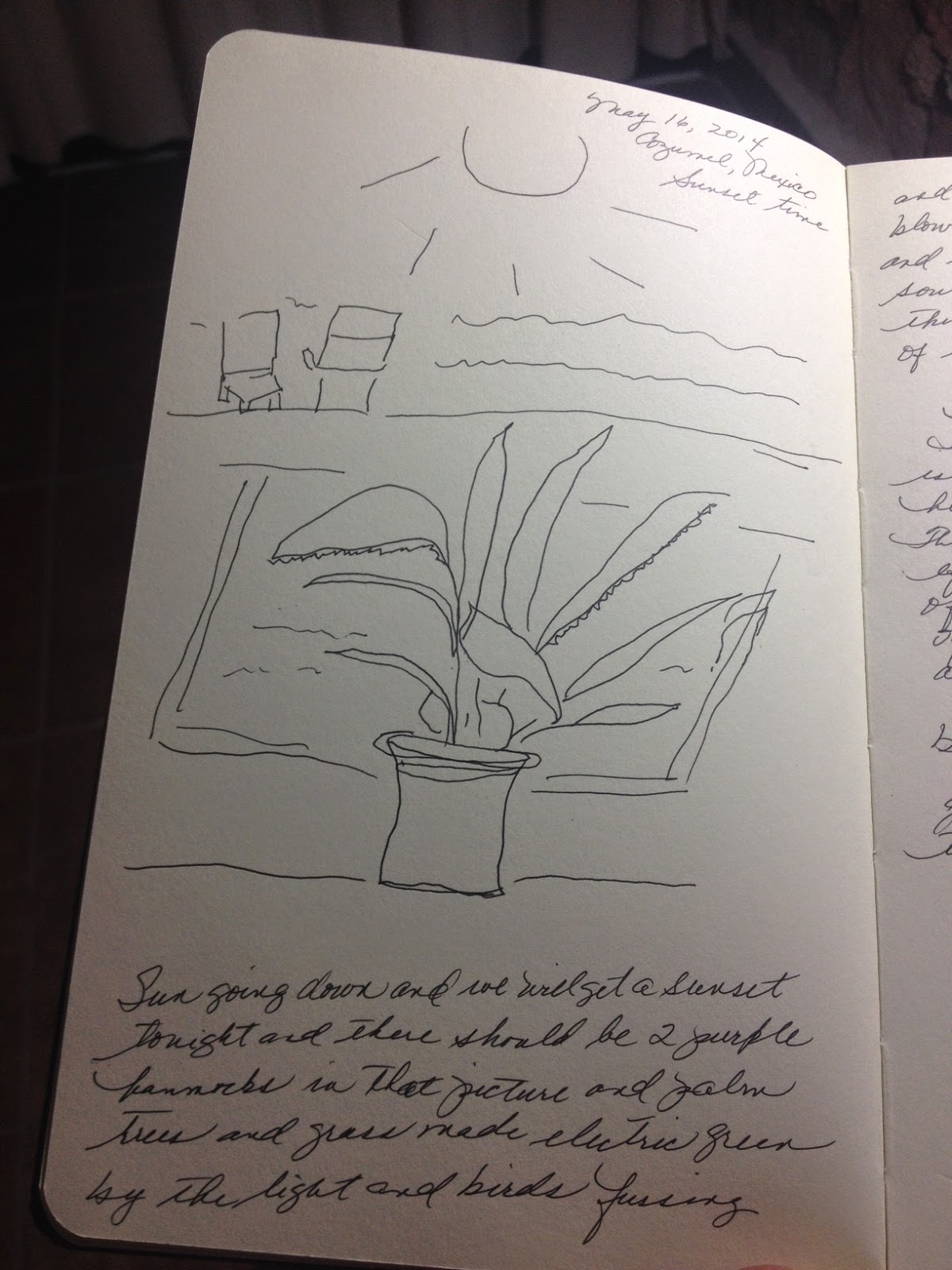 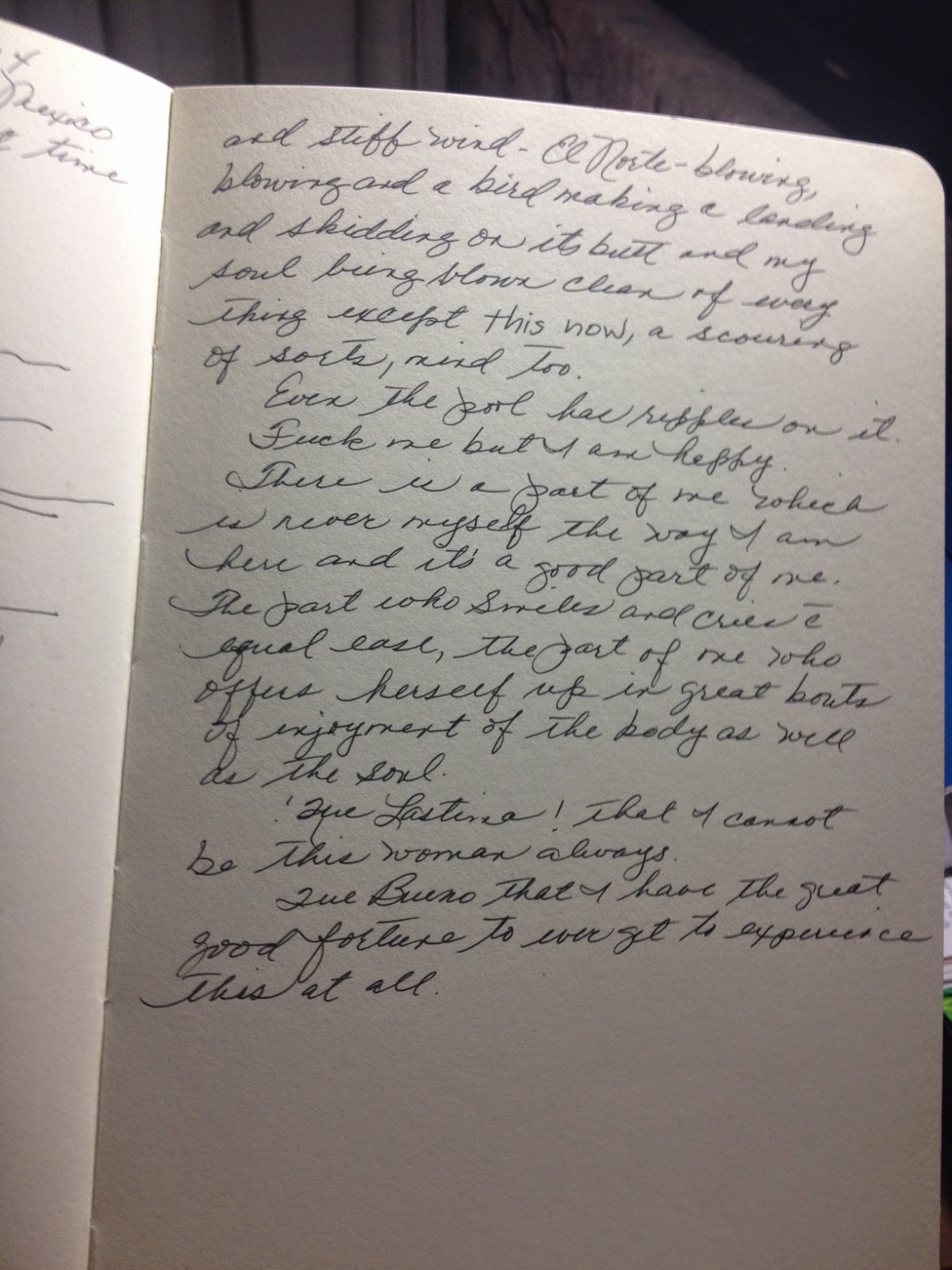 Such joy to write with a pen on paper and thank you, May for the pen. So much. It kisses the paper just right.

We drove slowly to town on the moped and got a supper. Mine was mahi cooked in banana leaves with tomatoes and peppers and onions and it was so good. Our lunch today was lime soup at the place we love where the waiter looks like the Mayan Keith Richards, his hands as gnarled as Keith's, his face as deeply etched and beautiful. The people next to us were from a cruise ship and they were so funny. They couldn't believe Cozumel is safe to walk about in, even the not-touristy places and one of them men told us that he had three entire lobster dinners on the ship last night because why not? They were paid for already and I told Mr. Moon later that I was sure that our bowls of soup had more flavor in them than those three lobster dinners and I am sure I was right.

On our way home tonight we stopped at Chaudrai, the big super market and everyone was there, buying groceries and as always, people were amazed at my husband's height. He scared one little girl to death even though he smiled at her and spoke to her softly. We spent less than twenty dollars on a coffee pot so that we can make coffee in our room because, well, coffee...

And then we drove home and it was night and the rain was falling a little bit and El Norte continues to blow and it is 11:20 at night and there is so much more to tell but it's time for bed and I wonder what we'll do tomorrow but whatever we do, there will be coffee and the sky and the water and the wind and I am so full of it all that I can scarcely tell you and I can certainly not contain it all which is why I cry a lot and perhaps the most magical thing of all is how much fun I have with this man, thirty years lover and friend, partner and co-parent, now co-grandparent and if I die in my sleep tonight, it will have been as sweet as the smiles of the people who live here and I will have lived well and been happier than any human deserves.
Posted by Ms. Moon at 12:30 AM