I am having the hardest time focusing today. I flit from one task to another like the little yellow butterflies which stand out in fine relief against the firespike blossom but almost disappear when resting on a leaf. 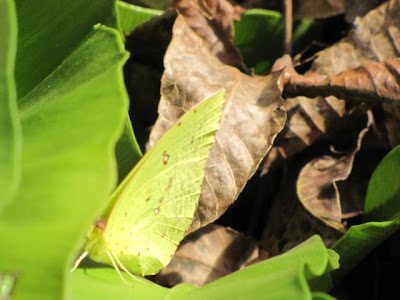 One of the things I did today was take my camera outside. There was nothing at all that stood up and raised its hand and shouted, "Take me! Take MY picture!" so I just walked around and snapped this, snapped that.
The chickens are always good for a shot. Nothing makes me happier than a portrait of Elvis, The World's Finest Rooster. 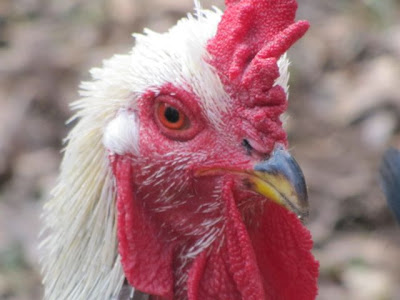 His head feathers are growing back in after the moult and look a bit quilly but damn, look at that eye! Look at that beak! A Rooster On Duty. Dude never takes a break. I hope he lives forever. That's probably not possible, is it?
Shit.

Anyway, so yeah, I took some pictures and of course I hung Mr. Moon's hunting stuff on the line. It not only didn't rain today, it cleared up, mostly. 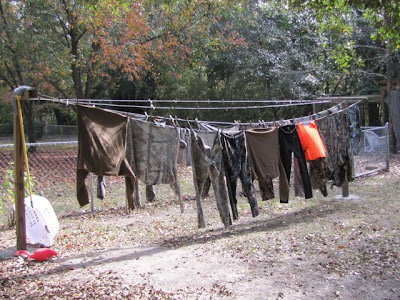 You can't see anything except for the orange safety jacket, can you? That's because it's all CAMO! Tricky hunters.
Well, of course you can see the downed flamingo. Flamingos would only be camouflaged in Divine's bedroom. Or in a bubblegum factory. Or flying against a sunset.
I need to go set that damn bird up again or else give him a decent burial. See? I can't even focus long enough to deal with a plastic flamingo.

I did all the other laundry too. Whoo-hoo. I do laundry every day.

I was going to boil some beans for some soup but despite the fact that it seems like I buy beans every time I go to the store, I can never find any in my cabinets. I have pasta and salad dressing and coffee out the yin/yang-wing/wang (sorry, I've been wanting to say that all day- I think there's something wrong with my brain) but as to beans- two sorry almost-empty packets, one of black beans, one of garbanzos. And they were filled with the dreaded weevils.
Time to burn down the kitchen!

Cleaning. You know, I keep having dreams about moving into houses which need cleaning OUT! I mean, they are filled with crap and there is something just so satisfying about the idea of doing this in my dreams. I look at crap-filled rooms and see them in my mind (my dream mind) all cleared out and set up as new rooms and it makes me happy!
In real life?
Nah.
But. I did go into the dining room and take up the rug in there which has been so peed upon by certain dogs that it is nasty and smells nasty and took it outside and put it on the fence next to another rug which used to be in the library and which is draped over the fence for the very same reason.
I don't know if we think that after several decades of fence-hanging in all sorts of weather that the rugs will be restored to usability or what. Obviously, we should just throw the motherfuckers away. It's sort of like putting that last one-eighth of a cup of cole slaw back in the refrigerator, knowing you're never going to eat it but letting it rest there in the cold until it is well and truly NO GOOD AT ALL any more at which point you can throw it away with a clean conscience.
And then I dusted and swept and mopped that room and you know- that feels pretty awesome.
Almost awesome enough to motivate me to head towards the library and start in cleaning there.
Almost.
Actually, I'm lying. I do not feel motivated at all.
Not one damn bit. I had to interrupt my dining room cleaning at least eight times to check e-mail and watch videos about squid and octopi changing pigment and also about dinosaur feathers which they have found preserved in amber and also one about a drunk guy being attacked by monkeys who did not want him on their own Monkey Island (who would?) and also, oh you know, eat some stuff. Leftover stuff.

Which is what we'll probably eat for supper but I am really trying to motivate myself to make a blueberry pie or maybe even a blueberry and blackberry pie because I have the frozen berries to do it and I've sort of been thinking about pie lately. Yeah, making a pie five days before Thanksgiving makes a LOT OF SENSE!

Okay. Wait. I cleaned out the hen house. REALLY WELL! (Not really. Just sort of well.)

And here I am, back at the computer, wondering if it's cheating to start drinking beer early if it's used as a motivational tool to clean. Because if I made a shot of espresso and then drank a beer (I call this the Housewife's Speedball) I would clean like a crazy woman.
Oh. I think I just pointed out the flaw in that argument.

I don't know. It's just one of those days wherein you have a vague itch and there just doesn't seem to be any way to scratch it and you aren't even sure where it is.
I would gladly give myself permission to do almost anything I wanted...if I just knew what the hell that was. So I go from one mindless task to another, not finishing anything, wiping up little dirt-spots on the kitchen floor with a paper towel instead of actually cleaning it and taking pictures and opening the refrigerator to see if there's anything new in there and there never is, dammit, and that's what I'm doing today. 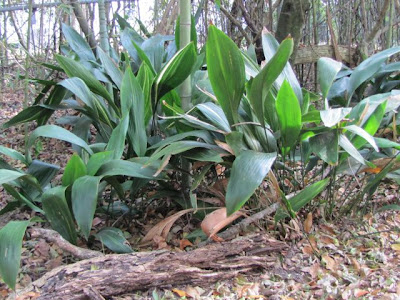 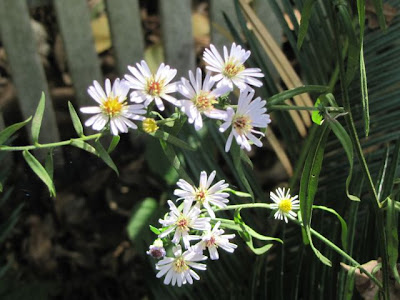 Tiny little flowers I do not know the name of. 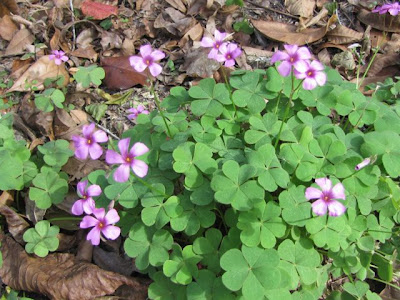 Oxalis or as my kids call it, Sour Flower, and which Owen eats like candy. It's actually quite tasty. And pretty in a salad.

I'm done now. Mr. Moon just called. He's still hours away from coming home. He called to tell me that our neighbors bought some Boston Butt pork roasts from their church which is selling them as a fund raiser (Excuse me?) and they are cooking one for us.

Great. More meat. Just what I need.
But really, that's mighty sweet of them. I have wonderful neighbors.

Thanks for helping me procrastinate, y'all.

P.S. Do not ask me why the font is all messed up here. I have tried to fix it and there is just no way. For me. You could probably do it. But I can't. So what? It's just font size.