I woke up this morning from yet another dream that my stepfather was in and I was having to fight him off. I was listening to a book later today about a man who'd been a soldier having nightmares, forty years after the war.
PTSD.
Is that what I have? Do I live in a state of constant fear, so familiar to me now that I don't even think about it? Is this where the anxiety comes from?
I do not know but the dreams have never ceased. Despite one-on-one therapy and a recovery group and absolutely decades of exploring the why's and wherefores of my psyche, and doing the work that was necessary to get me through the hardest, most difficult parts of my entire life, the dreams still come, and I wake up not knowing what to do with them.
I remember when I first started seeing my wonderful, beloved, excellent therapist, I had a dream in which I punched my stepfather when he tried to come into my house. I was so proud of myself! I felt that yes, finally, I was making progress!
That was probably about thirty-five years ago.
When I began the process of trying to heal, one of my main realizations was that the issue of abuse is like a many, many layered onion. Just as you think you have gotten to the core of something that affects you so much, you realize that no, the core is nowhere yet to be seen. What you are looking at is another layer that must be painstakingly removed. It is an endless process.
I realize now, at the age of 68, that it is a process I will never complete. And I'm not sure how that makes me feel. Despondent, yes. Depressed. Of course.
And yet, I know that if I had not found the therapist I found, the group of women who were fellow-survivors, I might be dead by now.
And of course my husband who has to put up with all of it- the process and the pain and the panic and the endless processing. It is not fair to him. It never had been, it never will be.

So many layers to that stinking, filthy onion.

Huh. Well. I certainly did not sit down tonight to say all of that but it would seem that I have. I am certain that there are many people who would tell me if they could, that I need to just "let it go, stop dwelling on it, it's in the past, the man is dead."
Yeah. Whatever. It will always be in the past and it will always be a part of who I am. There is no way around that. Attitudes and characteristics and coping methods of mine which were formed because of what happened are as ingrained as the color of my eyes by now. I have learned many things about myself and there is no doubt I could probably help myself further with things like meditation, doing  guided ayahuasca therapy...oh hell. I do not know.
In the meantime, I live my life and I love my life. But almost every day when I wake up, I have to shake the dreams that haunted me as I slept. Every day I make choices based on fear and the desire for safety and comfort.
It's something. And I have a feeling that many, many of you know exactly what I'm talking about. I wish we could all hold each other for a moment, give each other the kind of hugs that Brenda gave me in Costco today. The best kind of hug that stays with you.
"I needed that," she said.
"So did I," I told her. And I did.

I went to town today and ran by Hank and Rachel's house. Hank had a cyst removed from his neck and has stitches and wanted me to bandage it for him. Rachel is not comfortable with stitches. I understand. But it is nothing for me and I was so glad to do it.
I met Jessie and Levon at Chow Time for lunch. Levon has been having abdominal pain for almost two weeks now, mostly at night, and it comes and it goes but it is real and it looks like he's suffering. She's had him to see two doctors, had bloodwork, all that stuff and nothing out of the ordinary has shown up. So today he got an ultrasound and we shall see if that shows anything. When he's not feeling the pain, he is HUNGRY because when is feeling it, he isn't, and he is a growing five-year old boy. He ate pizza at Chow Time while I ate sushi and hot and sour soup and fried okra and cabbage and pineapple chicken and then he ate FOUR DESSERTS! His mother is spoiling him right now and so she should. This is a hard time for her. No mother, no parent, wants to see their child in pain and have no idea what to do to relieve it. And by the way- they were small desserts.
And then we went to Costco and he ate a little bitty taco sample and he wanted more of that. I let him play the game I have on my phone that the boys love. It's called Monument and honestly, it's pretty darn cool. I am spoiling him too.

We left the parking lot in our separate cars after we unloaded our Costco goods and I headed for the library which is on the way to Publix. I am finally almost finished with the Knausgard book and thank GOD because it is so very dark and weird and yet, I have not been able to put it down because it is somehow spellbinding. I have a strong feeling that finishing it will resolve nothing for me, either as applies to the book or to my feelings about it.

But guess who was at the library? Jessie and Levon! They had gone to turn in books and beaten me there. Levon said, "No way! This can't happen!"
I said, "It can happen because it did."

And on to Publix. Here, I took a picture. 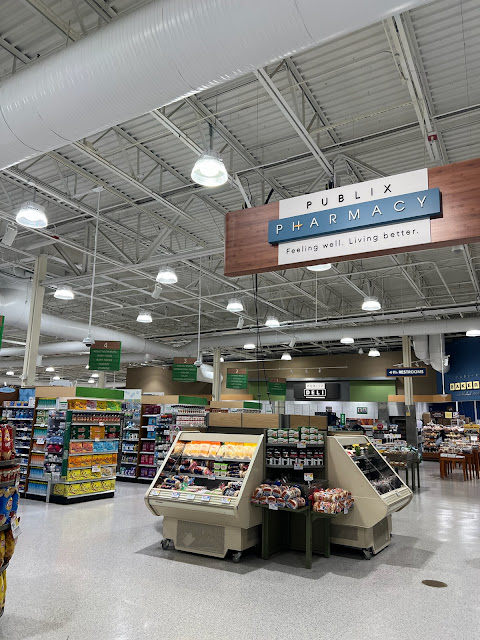 Exciting, right?
This is Lauren's Publix but it was Lily's Publix for many years. It is the closest one to my house. And there I was, in the produce section, when I heard...our family whistle! I turned around and there were Gibson, Maggie, and Jason. Oh my goodness! What a day. 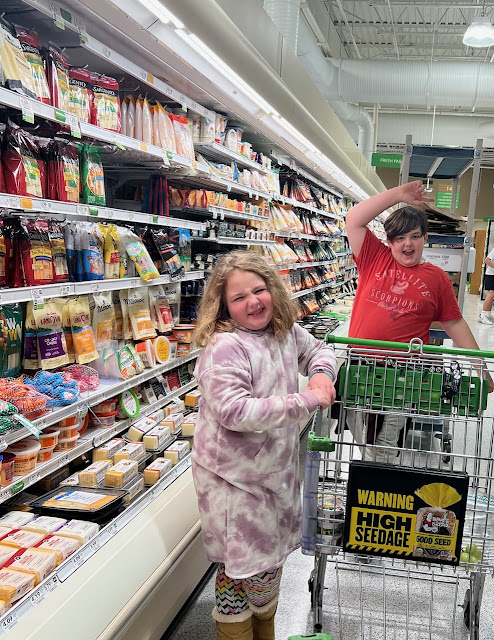 That picture was obviously not taken in the produce section but in the packaged cheese and lunch meat and frozen vegetables section, when our paths crossed for the 85th time. You know how that is- you run into someone you know at the beginning of your shopping excursion and you catch up, talking for way too long, and then finally you hug and say, "Oh, it was so good to see you!" and you make your get-away.
And then you see them again on the next aisle.
Now of course I did not feel that way about seeing my grandchildren and their daddy but we did run into each other a lot and ended up checking out at the same time. And oh! I forgot to mention that seconds after Gibson saw me and did the family whistle, his best friend appeared and said, "Hey Gibs!"
Gibson was amazed! "My grandma and my best friend!" I was waiting for him to say, "This can't happen!"
They hugged. It was so cute.
So yes, what a day, and a good reminder that bad dreams and worries can, like early morning fog, become thinner and thinner and finally dissipate if not entirely disappear from existence forever.
I saw a different cat in our backyard this evening. I always see the black panther cat who slinks by every day but this one was not one I'd ever seen before. And quite frankly, it did not look like any cat I'd ever seen before at all. It looked very much like Jack in size and girth and his colors were gray and white, like Jack's but arranged in the strangest patterns over his body. Like Jack, if bleach had been splashed over him. If he comes by again, I'll try to take a picture.
Thank you for hanging with me here this evening. And if you are one of those people who wishes I would just shut the fuck up about things that happened sixty years ago, I understand your feelings.
I wish I could too. Trust me.
And please know that for whoever needs it- this is, as we say- a safe place. Words that have become another cliche and yet absolutely true.
Love...Ms. Moon
Posted by Ms. Moon at 6:42 PM