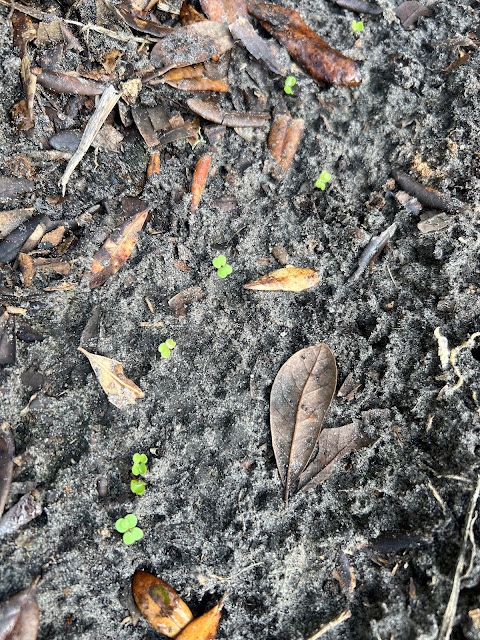 Can you see my tiny arugula sproutlings? They cheer and charm me. A tenuous promise of more delicious salads yet to come. I went out this morning to check and see if they had broken ground and indeed they had. I still have arugula from the fall's planting but it has been frozen and before that was bolting so it's becoming increasingly rare and thus, all the more valuable.

I took some greens out to Moana this morning along with some of the high-dollar bird food that Mr. Moon gives the wild birds. Don't tell him I did that but she loves the black sunflower seeds, pecking at them with great enthusiasm. She is a talking hen and her little conversations are so soft, so sweet. Yesterday she actually laid an egg but it was somewhat off. It had a good hard shell but the top seemed to be double-layered and there was a gap between that area and the rounded part of it. We thanked her though.

It was Levon and August day and because Lily is off on Thursdays, I checked in with her last night to see if she'd like to have lunch with me and Levon. She said she would and Lauren was off too so the boy and I met up with them at Tijuana Flats, a chain sorta-Mexican place. I told Levon that if he was very good at lunch, I would take him to buy a toy after lunch and he was SO good. 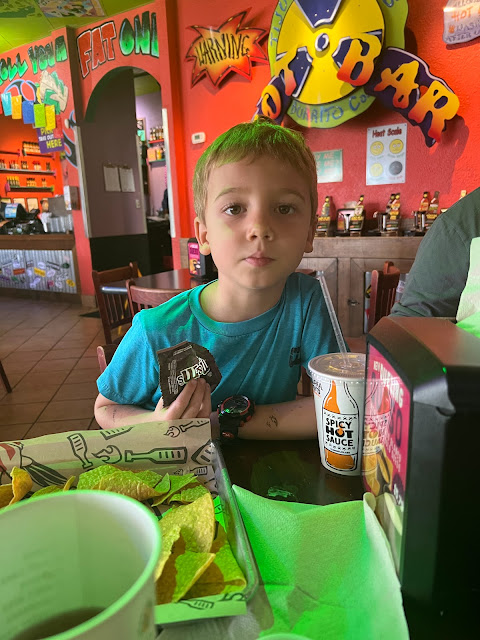 Neither his hair nor his tortilla chips are actually green. It was the lighting but- interesting effect.

Boppy even met us there after he went to the gym and it was a nice time. Levon loves his Aunt Lily and Lauren too. She is so good with kids, laid-back and funny, attentive and kind.

After we ate, Boppy and I took Levon down to Big Lots which is sort of like a glorified Dollar General combined with a Target. Ish.
But they have toys and the fellows picked out some Marvel action figure guys for Levon and August and although I looked through the food section where I used to find interesting things like delicious canned stuffed grape leaves and Bob's Mill products, I found nothing of much interest today. I bought a bag of pistachios and they're probably stale.

When we got back to Levon's house we had just enough time for me to read The Five Hundred Hats of Bartholomew Cubbins which Levon loves. It's a long story and I bet we've read it half a dozen times in the last few months but he likes to hear it and I like to read it. They would never publish a book like that now. Bartholomew almost gets his head chopped off, an archer shoots his hat off his head, and a spoiled brat almost knocks him off a tower AND then the spoiled brat gets a spanking from the king.
But as I said, Levon loves it and fuck all the we-must-protect-our-delicate-children's sensibilities bullshit. 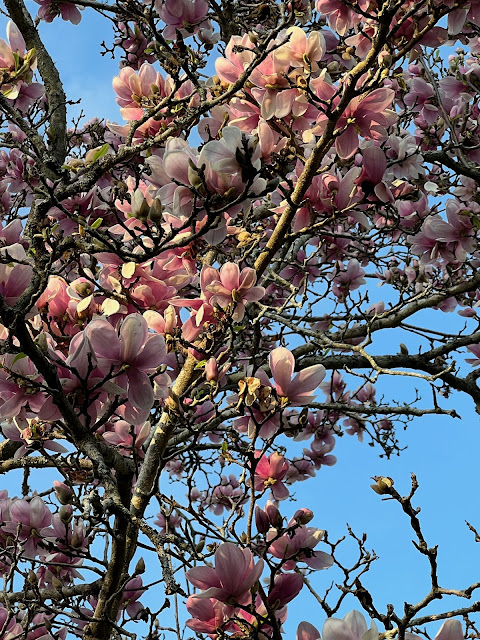 It was warm today, reaching at least 80 degrees but should get a little cooler tomorrow. I'll be glad of that although it did feel nice, like balmy spring outside. That's another picture of the Japanese Magnolia in Jessie's back yard. The flowers remind me of perfect seashells somehow, floating in a blue-sky sea.
I've been exhausted all day. I am sure it is an emotional exhaustion from yesterday's event. I am still tearing up and I'm sorry but I cannot answer comments from last night's post yet. I loved and appreciated them all and I am glad that people who never met Ross can feel as if perhaps they have had a glimpse of his bright soul.
The cat who looks like Jack but not, showed up again a few minutes ago. I tried to get a picture but he/she stayed too far back in the yard. Mr. Moon got to see her/him though. "What a pretty cat!" he said. I swear, I think he's come to love cats as much as I have.
"Come here, kitty. I want to pet you," he called to it.
"Feed it and he'll consider that," I said.
Off to go heat up leftovers. The soup last night was surprisingly delicious and should be even better today. And I am too tired to really cook which is something that rarely happens.
And oh, David Crosby died today. 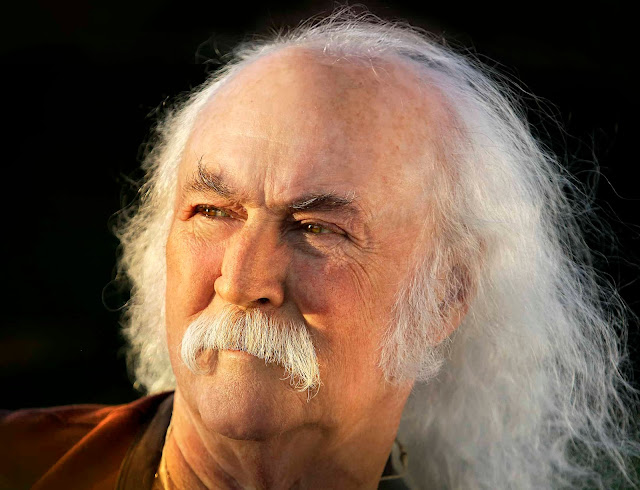 He was always the lion to my mind.
He leaves us with some beautiful songs and some amazing harmonies. For my generation, his work and his life was part of the sound track we grew up on.

We've tried. To teach our children well. God knows we have. I wish I could say we've done better.
May there be peace.
Love...Ms. Moon
Posted by Ms. Moon at 7:02 PM