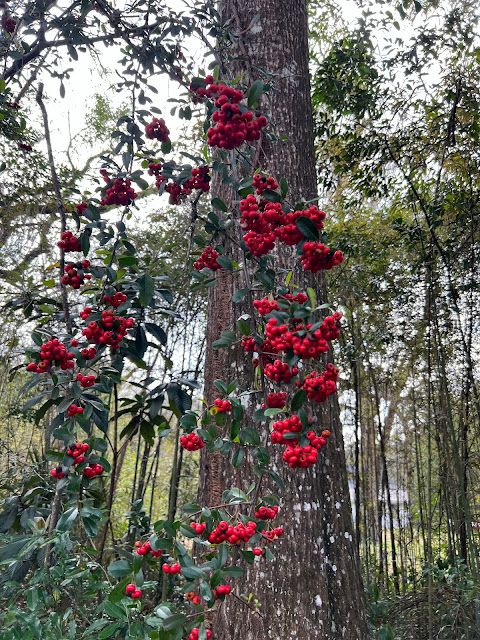 The weather just cannot make up its mind around here. Was it only a week ago that we had icicles on the garden fence? Today it got up to almost eighty and was humid as hell. It feels like spring and I even saw a bluebird on my walk this morning which always seems like a special blessing, getting a glimpse of what looks like a tiny, concentrated piece of the sky, so intensely blue, so quick, so pretty.
Meanwhile, the Bradford pears in my backyard have finally and at last turned gold and are dropping off. They've been green as a grass snake up until about yesterday.
That plant above with its glorious berries is known as pyracantha around here. Isn't it intense? Can you see the small magnolia growing up behind it to the left?

So yes, I did take a walk today and by the time I got back I was sweaty and unhappy. Mr. Moon had made the mistake of putting on heavy overalls and a flannel shirt to go do some work outside and he had to come in and change. We have no idea how to dress right now. One day we're wearing wool and cashmere, and the next we're barefoot and panting like dogs under a porch. It should start cooling off again by Friday.

Here's another picture I took on my walk. 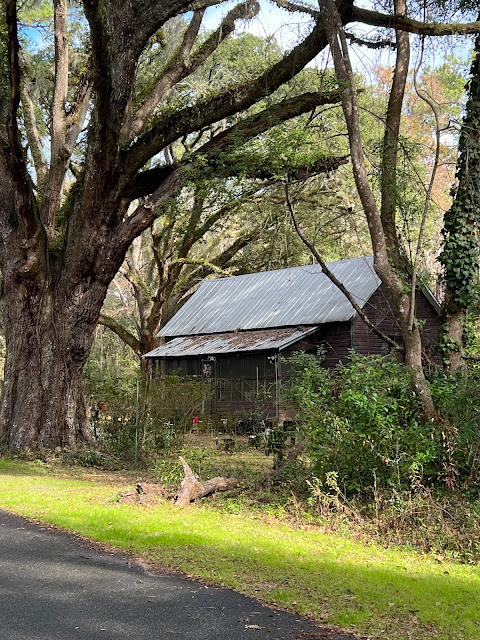 I've taken pictures of this house before. I do not want to go stand in front of it and take a picture straight on because someone lives there. Also they have a little yappy dog who is always on high alert who notifies the world when I deign to even walk by. But I love that house. I so want to go inside of it and see what it looks like, what it smells like. The trees over and around it make me swoon. I wish I knew its history. It sits on a tiny little road named Notre Dame which in and of itself is curious. There are only a few people who live on it and it dead-ends into a piece of property with a prefab house on it which is not very far from the convenience store, Subway, and the liquor store. That part of the road parallels the road that the Dollar General is on. A little hidden part of Lloyd.
I went to Publix today. I was out of eggs, for one thing. Can you believe that after all these years of having bowls of eggs all over my kitchen, bountiful amounts of them, that suddenly, I have not a one and eggs cost six dollars a dozen! What the hell? We were so spoiled but I will say that I never, ever took those beautiful eggs for granted. Every day that I gathered eggs I was thrilled again at the miracle of them.
I cannot think that I will go the rest of my life without having chickens again. It's just unimaginable. How I miss their constant presence, their soft communications, their busy scratching and examining of the dirt for the things they loved to eat.
Anyway, Publix.
Y'all- I have either got to get out more or else just throw in the towel and admit to being an agoraphobe and I do not want to do that. Shutting myself off from others is not a healthy way to live. This has gone far beyond me not wanting to do things like go to concerts or the mall. Even just being in Publix is overwhelming to me and it wasn't that crowded and there was not one situation or person who made me feel threatened. I cannot quite explain it. I do not even really want to talk about it because it makes me emotional.
I think that at least a small part of it is that I find it hard to separate myself from those around me in the sense that I am constantly aware of their feelings. I had to pick up a prescription (Publix has a pharmacy) and because of a change in our insurance, things became complicated and people were lined up behind me and I hated being the cause of them having to wait and I hated the thought that the woman behind the counter helping me was stressed out because my situation was taking so much of her time. I apologized over and over.
When I went to check out, the woman in front of me wrote a check for her groceries and yes, she was older although I doubt older than me. And she first wrote the wrong amount on her check so she had to tear that one up and start again and then she filled in something else incorrectly on the second one and it took a long time. I was not in a hurry but I have to admit that I was a bit annoyed and that fact made me feel bad about myself because who cared how long I had to wait? Not even me.
And at the same time, I did not want the woman to know that I was annoyed. She was doing her best.
These are the sorts of things that people who overthink everything and who do not have the necessary wall between themselves and others feel. And then of course we feel guilt and as if we are being ridiculous because we FEEL SO MUCH!
Too much.
Oh well. I will be Scarlett O'Hara and think about these things tomorrow when I am stronger.
Meanwhile, here's what the trees in my backyard looked like tonight before the sun set. 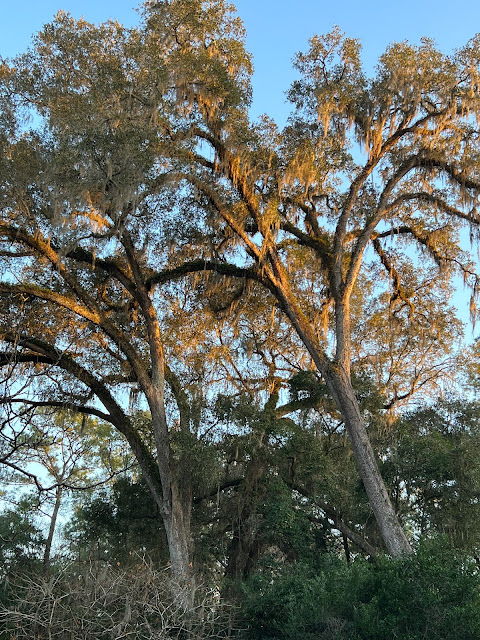 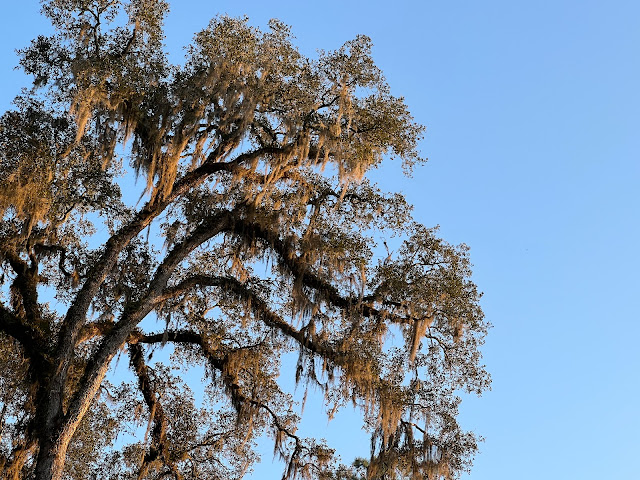 Can you see the Spanish Moss, Ms. Merlot?
It is not a moss at all, really. It belongs in the bromeliad family. There is a very good article about it HERE.
Be well, y'all.
Love...Ms. Moon
Posted by Ms. Moon at 7:02 PM