Not At My Best But Not Too Bad 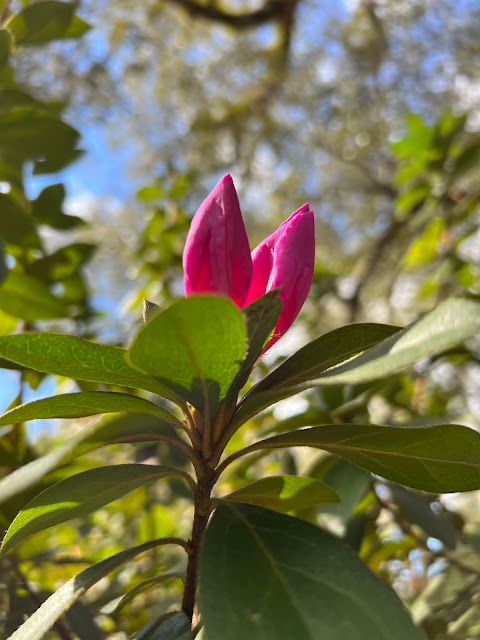 It looks like we may not have lost all the azaleas after all. I found these two buds reaching up today like torches raised in tribute to the coming spring.

It was a perfectly lovely day with a few white cotton ball clouds in the blue sky. It started out though with some news that I figured would be coming which is that August tested positive for Covid although he just has a little cough and no fever. Vergil's test still isn't in as far as I know but he went for a run this morning so he's feeling a lot better. Levon's school has been sending out notices that they've had some kids testing positive and so there you go. Jessie herself doesn't feel well but she's going to go into the hospital where she works for a test which is how they do it.

I haven't been feeling very good. My body aches and I'm slow and can't seem to get warm. I did take a test and it came up negative and I'll take another tomorrow if I still don't feel well. It's funny. I just finished listening to a book yesterday about the influenza pandemic that circled the globe with such morbidity in 1918. It was horrifying. And today I started listening to one of Elizabeth Strout's Lucy books (Lucy By The Sea) which takes place during the covid pandemic. You know, even though that happened like day before yesterday, it is still hard to call up that whole section of time when we isolated ourselves and could not hug our grandchildren or beloved friends, when each trip to the grocery store was a panicked experience, how we made masks of cloth and used coffee bag closures as nose pieces. But it did happen and it could happen again. The refrigerated trucks lined up to receive bodies from hospitals and mortuaries, the medical staffs who risked their lives daily without the proper protective gear. The schools shut down, the travel restrictions, the reports of mortality from each state, each county, each community. We humans do not learn from the past. We just don't. We act like such an event was a complete one-off and could never happen again.
Tra-la-la-la-la, we sing with our fingers in our ears.
Hey! Me too!

I got outside for a little while to plant my chard and do the tiniest bit of weeding. Look at the happy garlic. 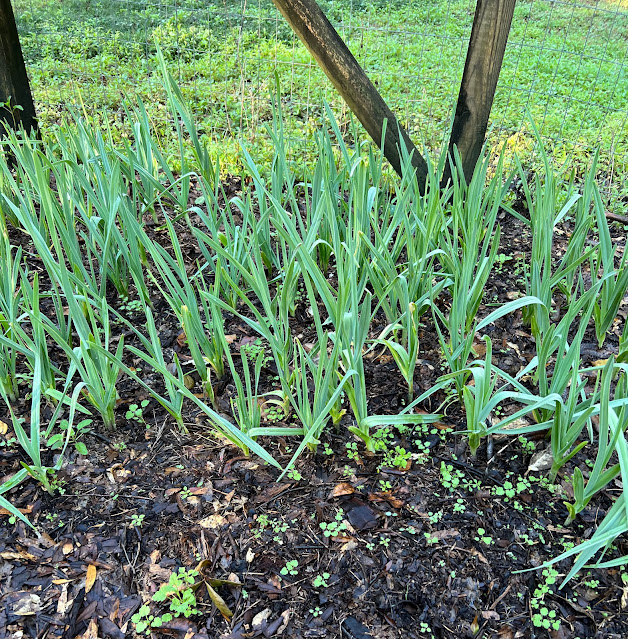 And then I picked some carrots and turnips and greens for the soup I wanted to make. I had the mostly-picked over skeleton of the chicken we'd had a few days ago and some frozen Thanksgiving turkey. I started a stock with the carrot tops, a piece of onion that was in the refrigerator, some of the turnip greens, and some garlic, a bay leaf. My carrots are not very large yet but I have begun pulling them. 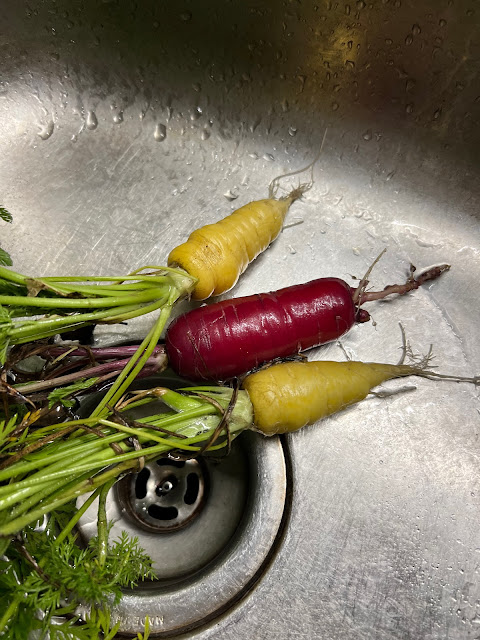 I am wishing I'd planted at least one more row.
Later on in the afternoon I strained the stock and simmered the chicken bones, thawed the turkey, chopped the greens, the turnips, and another onion, sliced celery and the carrots. I've put that all together with some leftover broccoli and it's simmering nicely. Before we eat I'm going to add the rest of the pasta I made the other night with greens, broccoli, almonds and lemon juice in it. I'll probably squeeze more lemon in it and maybe some lime too. I'd add some tomatoes if there was room in the pot but there is not and I refuse to transfer it to the giant pot.
So obviously I am not so bad off. All day I kept planning to sit down and do some mending and/or crocheting but every time I finished one task I thought of another to do. I set Ralph off to vacuum, bless his heart, and before I did that I gave his parts a good cleaning and tweezered hair from around his wheels and rollers. I really do have a great affection for Ralph. He manages to make me feel productive even when I'm not doing a damn thing. Just hearing his industrious little robot sound as he pulls the dirt and dust up off my floors makes me feel as if the situation is being dealt with.
And it is.
I finally took a few minutes to finish up the patch on Mr. Moon's jeans. 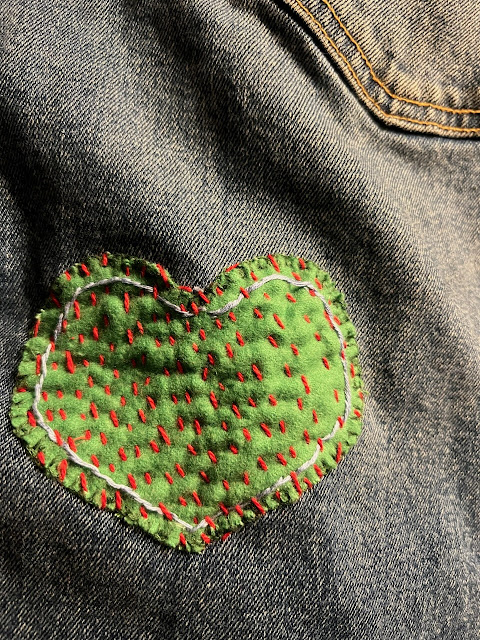 Henceforth we shall call it the Freaky Old Lady Name of Cocaine Katy patch. I hope it's what he wanted. He's in town right now. He went to the gym and he needs some sort of, uh, metal boat part. Also come covid tests.
I asked him today what we should do if I do test positive. I mean- he was with the kids too and there's little doubt that he has been exposed to whatever it is that I have.
"I don't know," he said. "We sure did a lot of kissing last night."
And yes. Yes we did.
Well. We are both vaxxed and boosted, boosted, I don't know how many times boosted. I'm sure we'll be fine.
But maybe I won't kiss him for a day or two.
At least not on the lips.
We shall see.
Love...Ms. Moon
Posted by Ms. Moon at 6:29 PM