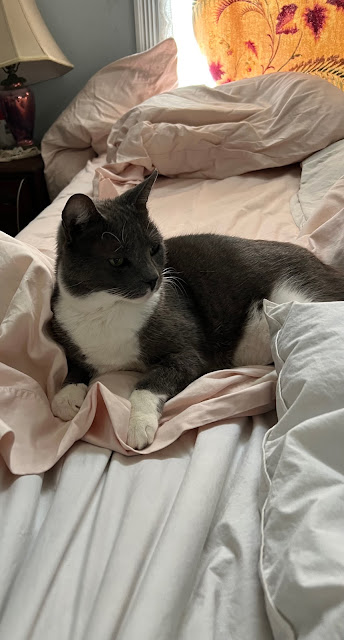 This is Jack when I ask him to please get off the bed so I can make it. He just looks the other way, the better to pretend that he is not aware of my presence and that he definitely can not hear me. When I actually start pulling at the covers though, he jumps off the bed in a huff, sounding like a buffalo jumping off a cliff. When he runs through the house, which he does occasionally, he sounds like a herd of buffalo.
Terromph, terromph, terromph.
A few nights ago when Mr. Moon got in bed he wondered where Jack was. Jack is usually snuggled in by the time my husband gets to bed. That night he had not yet made an appearance but just after we turned out the light, he was suddenly there, between us, as if he'd heard us talking and thought, "Oh Lord. I'm late to bed. My humans need me." And he presented both of us with his head to scratch, first Glen, then me, and settled down next to my hip the way he does. He knows not to try and cuddle the Man Human. This is not tolerated.

I took an almost-decent walk today. I just went down the sidewalk and then to the property line of the ranch we admire so much that has sprung up a little way down the road. I saw no sheep, cows, horses or donkeys. I was disappointed. It makes my day to see a donkey. They charm me with those ears and soft eyes and round bellies. I should get a donkey. It could live in the hen house with Moana. She could perch on his back and they could be friends.

I also did a little weeding of the crocosmia this afternoon. This is how thickly it is growing in one of the areas in the front yard. 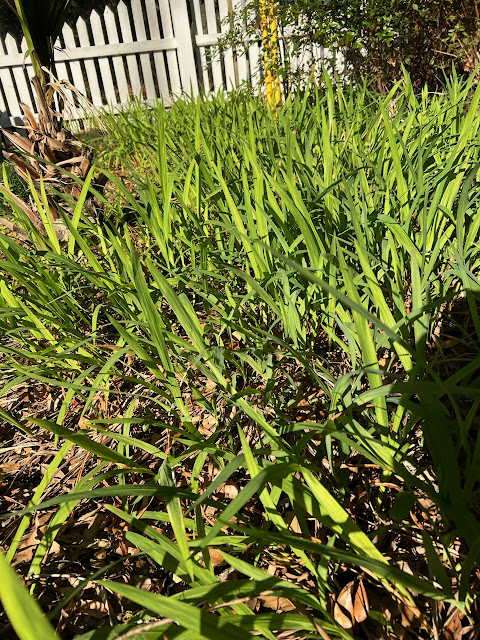 Every dang one of those things has roots with strings of bulbs attached as do the dead, brown ones from last year. It wouldn't be so bad if they actually bloomed the way they're supposed to but I don't get enough sun here for that. Perhaps one in every two hundred of them blooms. Maybe. If I'm lucky. There are also lots of tiny oak sprouts trying to become the next Big Tree that must be pulled. So I trowel and pull, trowel and pull. It's not bad, really, except that my knees can't take as much of it as they used to be able to.
Oh, god. I am getting old.
When I stand up (which requires no small effort) I make noises that sound like I may be dying. I am not complaining as much as I am just stating facts.
Of course Maurice joined me. She even came up and rubbed against my hand and I reached out to pet her, give her a little love, which caused her to reach for me with those Talons of Death and bared her fangs and I jerked my hand back.
"What is WRONG with you, Cat?" I asked her. She just walked away as she always does.
That part of the yard must have once had some sort of walkway or patio or something as there are many, many bricks lying just a few inches below the ground. Sometimes I dig them up and toss them into a pile and sometimes I just leave them be.
Today I also noticed a very old, aged and weatherworn piece of wood with the most beautiful design in it. 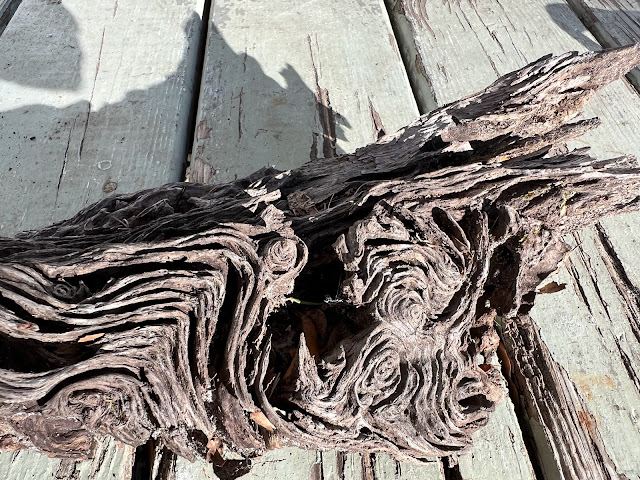 Can you believe that? I need to do something with it. It is just so amazing.
Maurice took an interest in it too. A brief interest. 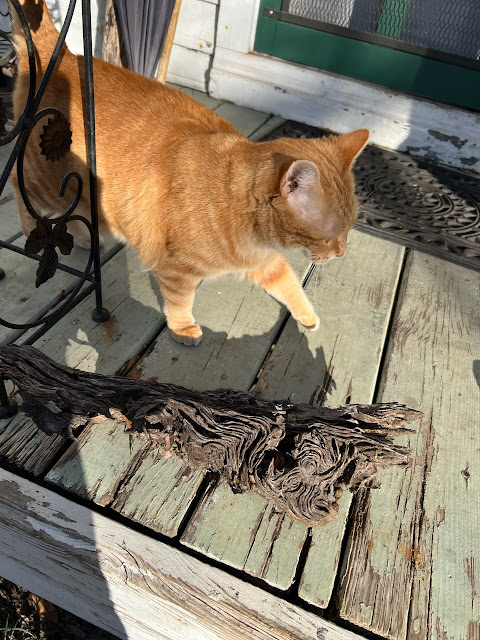 Right now she's sitting on the table on the porch where I'm writing this, closely watching the squirrels who are sort of going crazy, chasing each other up and down trees, their toenails scritching into the bark of the pecans and the Bradford Pears. The other day I swear to god I saw one squirrel knock another squirrel off a branch. A high branch. There was a loud smack as the poor victim fell on the ground. I haven't found a body so I guess it lived although come to think of it, that happened right around the time I found some guts (okay, intestines) on the porch that looked too big to be bird innards.
As Lily so famously shouted one time, "TOO MUCH NATURE!"
And on top of all of this, I vacuumed the entire house today.
Okay, okay. I instructed Ralph to vacuum the entire house today via the app on my iPhone.
He is such a fine and faithful little robot and has not disappointed me in the least.
Here's the sunset. 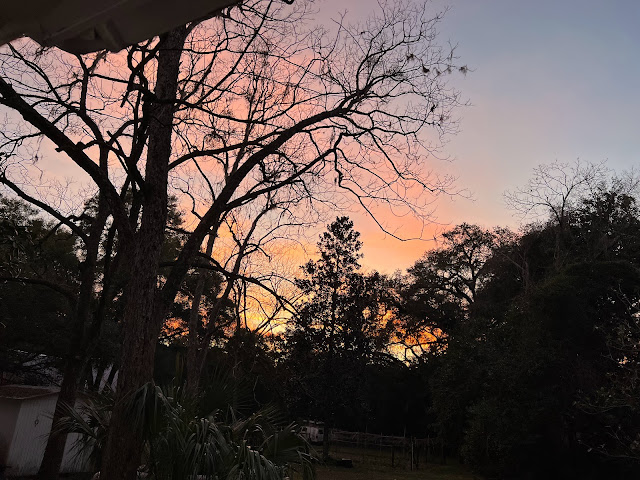