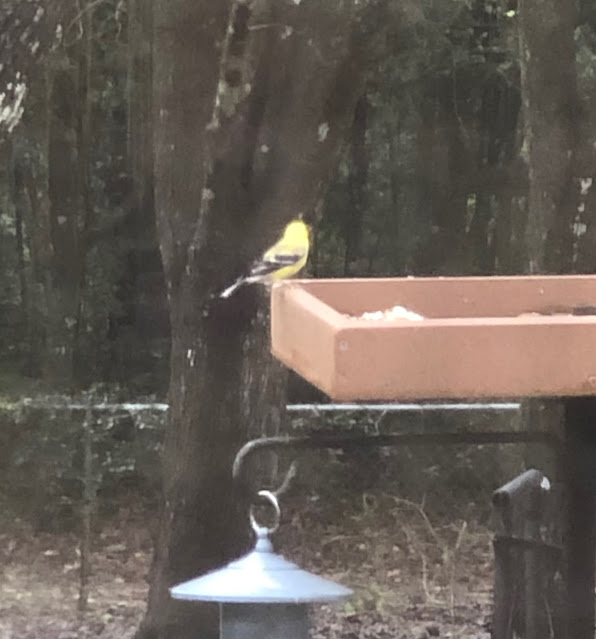 This morning a pretty little goldfinch came to the feeder. It is a breeding male. When the boys aren't interested in attracting the girls, they are a more drab brown with just a little yellow around the neck but as spring comes and sap rises, they turn a brilliant yellow. You can't really tell from this horrid picture but that one was like a ray of pure sunlight. He ate a few seeds and then took off again. I always feel somewhat blessed when one shows up and shows off his courting coat. 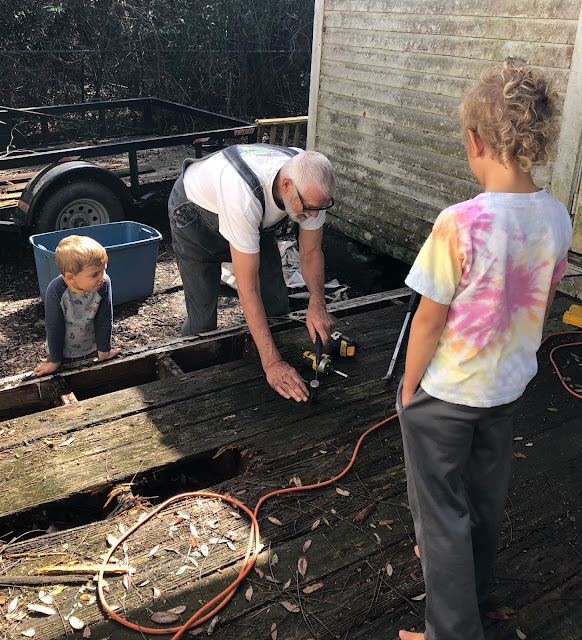 We had a good time with our boys this morning. Levon was a good helper for his grandfather in the deck removal project. August preferred playing a game of Life with me. Before that, though, we read some books and he brushed my hair as I read to them and if that's not heaven, I don't care to go. Why do we love having our hair brushed so much? It's just the most luxurious feeling, isn't it? I am certain that it comes from our close ancestors, the Great Apes, who groom each other daily for hours. Apes, of course, are not the only animals who groom each other. Birds do it, my chickens occasionally do it, especially the hens who carefully nip gnats and other bothersome things hovering around the rooster's comb. I knew a parrot once who happily preened my hair which was in a braid. I loved it! There are fish who nibble at other fish, removing algae and parasites from them, and of course monkeys groom each other with great seriousness.
If men only knew how much woman love their hair brushed, they would probably be so much happier. Happy wife...happy life.
Etc.

Anyway, August beat me by about four million at Life and although I'm pretty sure we made up some rules and disregarded others, we stayed fairly faithful to the game. Some parts of it he gets better than I do to be honest. We also played a game on my phone that comes with the New York Times. It's a tile-matching game and he grasped that instantly. We played a game together and then he showed Levon how to play it and they had a great time.

The chicken and dumplings went over very, very well, last night and for today's lunch. When Levon had eaten all he said he wanted out of his bowl, I gave him little bites of dumplings that I still had left. He ate them like a hungry little bird and said, "How do you know I like the dumplings best?"
"I just know," I said mysteriously. "There are some things that mamas and grandmamas just know." And then I gave him another bite.

After lunch we let them watch a movie. The Paw Patrol movie, to be exact. Mr. Moon dozed through it and I got my overalls patched and started in on my latest potholder. I, however, was listening to Mormon Stories while they watched their movie. At one point it seemed like something quite sad was going on on the screen and I asked Levon if he was all right. He gave me the sweetest Levon smile and said, "Yes! This is so fun!"

We walked to the post office which meant that we passed the house next door that was recently sold. I think the people have moved in and ONE OF THEM IS A SHERIFF! The sheriff car was right there in the yard. I had heard a rumor that this was true and it seems it is. "Well," I told the boys, "If I have any trouble, a policeman will be right there to help!"
Ay-yi-yi. I think of how I would have felt in the old days if a sheriff had moved in next door and I am still a bit shuddery at the thought although we do absolutely NOTHING that's illegal these days. As far as I know. I need to go over and meet them, take some eggs if nothing else.
Boppy decided to take the boys down to Lloyd Creek to test the waters there for bream, having heard that they can be caught there. It's less than a mile away but of course finding worms in the garden and getting the fishing poles all ready took quite awhile. While the men did that, I made what I can only call Grandmother Cookies. 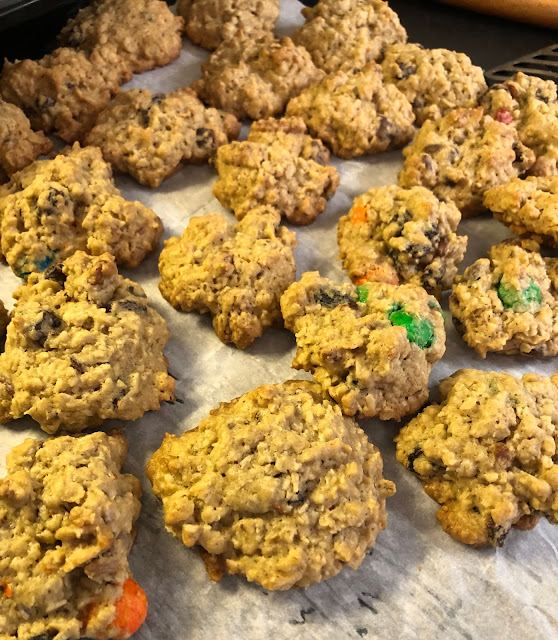 Oatmeal, raisin, chocolate chip, pecan, and M&M cookies.
I mean- please.
The guys got back from fishing before I'd gotten all of the cookies out of the oven. Levon had an emergency bathroom situation to take care of.
Poor guy.
So we sat on the porch swing after that and read some more stories and then their Papa came to pick them up and off they went with leftover soup and a bag of cookies.
And Mr. Moon went back to the creek to "drown some more worms" as he said.
Before I'm done here, I'd like to point out that Hank has a new visual blog. It's called What Am I Looking At Here?
Click on that title to go check it out. He'd love to get a few comments. Well, actually, he'd love to get millions of comments but wouldn't we all?
Don't be scared by the adult content warning. So far, there has been nothing that anyone would find offensive but you know us- our family is not easily shocked nor do we really worry that anyone else will be either.
One more picture. 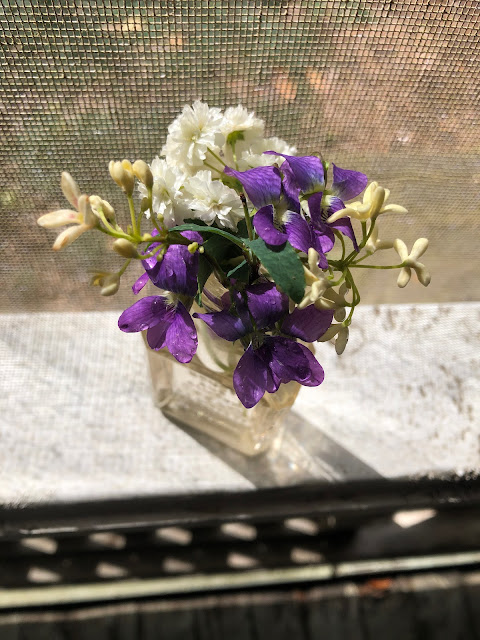 Woodland violets, spirea, and tea olive in one of the old medicine bottles we've found here on this property.
Oh, how I LOVE a miniature flower arrangement.
Yours truly and with love...Ms. Moon
P.S. Obviously I have felt much better today.
Posted by Ms. Moon at 6:59 PM