Mistakes Were Made. Of Course 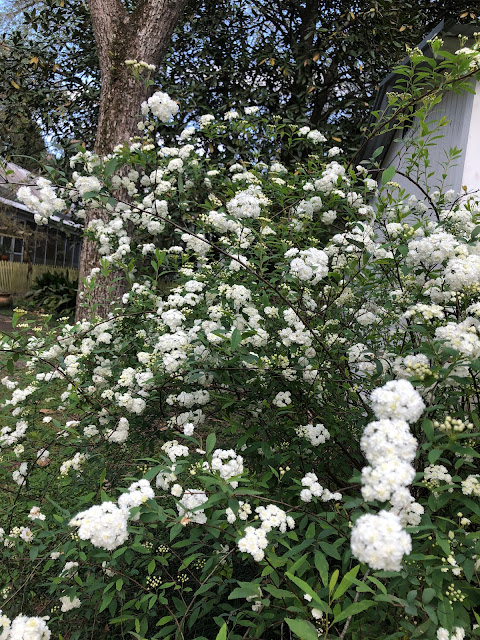 The spirea is spilling over with its white blooms, fancy as a wedding cake. The tea olive is so heavily fragrant that I can smell it all over the side yard and part of the back yard too. It's been another sweetly mild day, offering soft breezes and very tolerable temperatures, a day to be outside.

And yet, I've felt sad all day long. Is it just the Sunday blues? I don't know.
I listened to a podcast last night where a guy spoke about regret and how it differs from shame and how all of the cultures he's studied seem to show that regret is universally human and no matter what language it is discussed in, the same words seem to be used to talk about it. It's as if we are encoded to look back and wonder, ponder, what our lives would have been like if we'd only done this instead of that, chosen something or someone different, took a different path, followed a different dream, made different choices.
Regret is not shame and supposedly everyone but small children and sociopaths experience shame. We all know it. Some of us know it too well and it prevents us from being honest, from admitting even to ourselves who we truly are. It can also motivate us to change, to be different.

As I get older I think a lot about regret. Shame too, but not quite as much. There are some things I am ashamed of, without a doubt, but it is the regrets that I dwell on the most. I cannot say that I regret any of the biggest things I've done in my life, even marrying my first husband because of course I got my first two children from that marriage and he was not a horrible man. I don't regret divorcing him although I would have given anything not to break up our family which was absolutely one of the most painful things I've ever gone through.
I don't regret going to nursing school for any number of reasons. I don't regret marrying Glen Moon in the least. I don't regret being mostly a stay-at-home mother.
But I regret many of the things I did as a mother, the way I mothered, which (and oh, how I hear the echo of my own mother's voice here) I did the best I could.
But did I? Don't we all say that? Is that not the (excuse me) mother of all rationalizations?
So anyway, I've thought about all of this so much today as I've gone about my tiny life doing my tiny things, wasting my tiny time. I spent at least an hour trying to get a damn plant out of a damn pot and finally I asked my husband for help and together we ended up breaking the pot which was honestly the only way we were going to get that thing out of there. 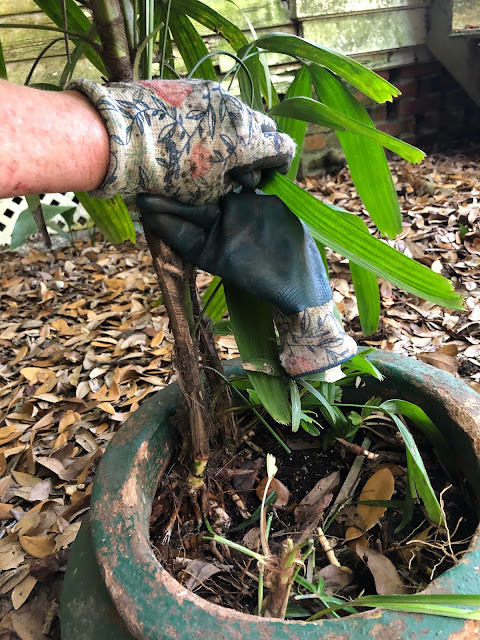 It's a lady palm and I wanted to replant it in front of the swing porch along with another one that I had transplanted there. Although it was sold as a house plant, it has done quite well in the dirt, surviving freezes merrily, growing well in the deep shade of that area. As I was pulling and cutting and snipping and troweling and pulling and cutting and snipping and troweling I began to despair and inside my head I was wailing, "Why? Why am I doing this thing that is causing me so much grief?"
Which seemed like a metaphor for so many of the things I do which I only do because I think I should and which end up taking all of my time in which I could be doing something I want to do. Truly want to do.
Regret.
Stupid, needless regret.
After we finally got the plant out of the pot, I had several stalks of it with roots on it and I planted some where I had intended and took a few to the front of the house over by the church where Mr. Moon recently moved the fence back and was planting some more of it there when a lady I see walking sometimes came down the sidewalk with a young girl.
"Where have you been?" She asked me. "I never see you walking anymore."
My tears welled up- that's how on the verge of crying I've been all day, and I told her that I've been a lazy slob and that I've had things I needed to do which is sort of true but mostly not.
We talked a little more. The young girl was her niece and we traded names. "Is this where you stay?" the aunt asked me.
"Yes," I said.
"That's a big house!" she said. And I immediately felt guilty. Of course it is. It's way bigger than we need and I know it. But I do love this house and buying it is not a regret. Which does nothing to mitigate my guilt.
I asked her if she'd like a  piece of the palm I was transplanting and she said she would and I gave her some.
"Now you start walking again!" she said. I told her I would and also said that if she was ever out walking and passing by and needed a bathroom or something to drink, to stop by, that I am almost always at home. She said she would but I doubt she will.
Maybe.
She does not live very far from me.
And even as I write all of this I realize how ridiculous it is for me to waste time feeling these completely useless feelings- regret, guilt, even shame. The one main regret I have is something that I can't even really talk about because with it comes a great deal of resentment and whether it is valid or not, it is there. It is probably my way of blaming others for my own lack of determination to be honest.
It is all so complex, isn't it?
Sigh.
I suppose it's really only complex if we make it so.
It is the golden hour here right now. And it truly is golden. I look out at my banana plants and how they are sending up their new leaves which are gleaming in the sun. The geraniums I potted up today that sit on the kitchen porch look happy and homey. I hear a dove cooing and other birds singing their evening songs. Everything the lowering sun touches gleams and shines, some new leaves are rendered almost transparent by the backlight.
If I am completely honest with myself (and is that even possible?) I have to admit that I have everything I ever thought I wanted or needed except for a very few things. This old house, even with its peeling paint, its mildew, its warpy floors, its rambling rooms- I love it so much. It brings me such peace to live here with the oak trees outside, the camellias and azaleas, the graceful porches. The space for a garden that the man, the likes of whom I never even dreamed could love me has tended so well. 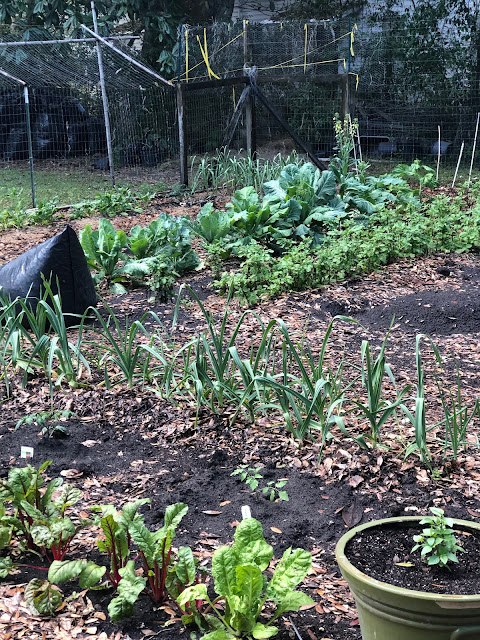 And my children who seem to love me despite the many mistakes I made in their raising. The grandchildren who already know me as vastly imperfect but someone whom they know gives them her heart along with M&M's, advice and stories.
It's all so much. Some days I suppose I am just overwhelmed by it all. The regrets, the guilt, the disappointments in myself right along with the incredible gift of all of it, so much more than I ever expected, so much more than I ever deserved.
Well.
Sundays.
Fuck 'em.
Love...Ms. Moon
Posted by Ms. Moon at 6:40 PM