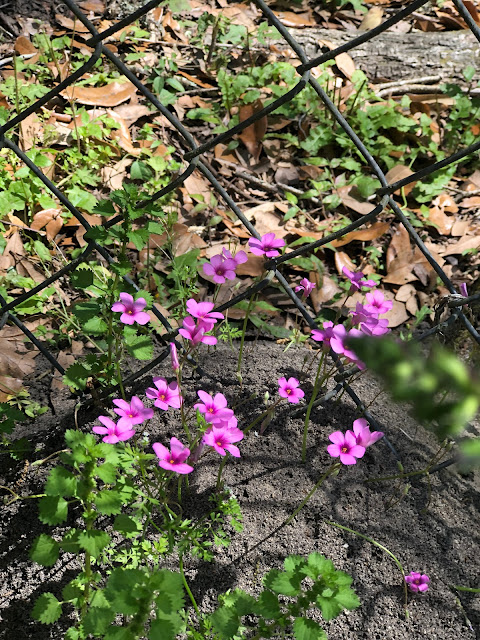 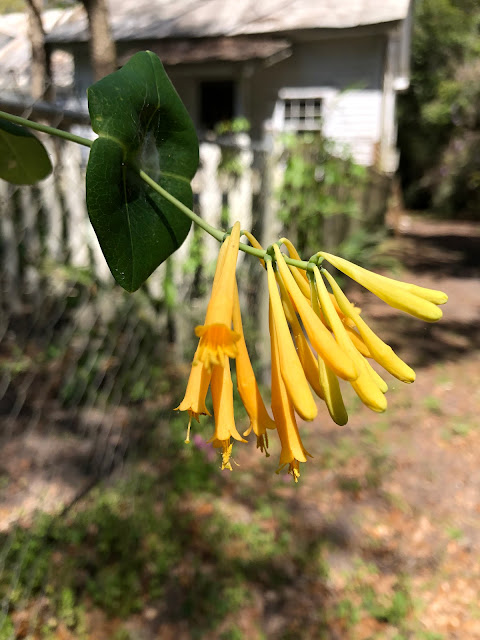 I took those this morning after I hung the clothes on the line. A day far too perfect to dry clothes in a machine.

Today slid by faster than any day this past week. I honestly do not know where it went. After I did a few morning chores and did the crossword and ate my breakfast I started making potato salad for Gibson's party and then it was time to GO to Gibson's party and we were late, even though it wasn't set to begin until 2.

We had all encouraged Lily to make this as easy on herself as she could and she did and it was a good party. Jessie and her boys were there, Mr. Moon and I were there, Hank was there. And that was it! May and Michael and Lauren had to work and Rachel wasn't feeling up to it and so it was just us. Lily put out bread and rolls and deli meat and cheeses and a veggie platter and chips and guacamole. I brought my potato salad, Jessie brought deviled eggs. It was perfect. The kids got to play and enjoy the incredibly beautiful day and oak tassels fell on us as we ate, along with caterpillars which there are thousands of right now. 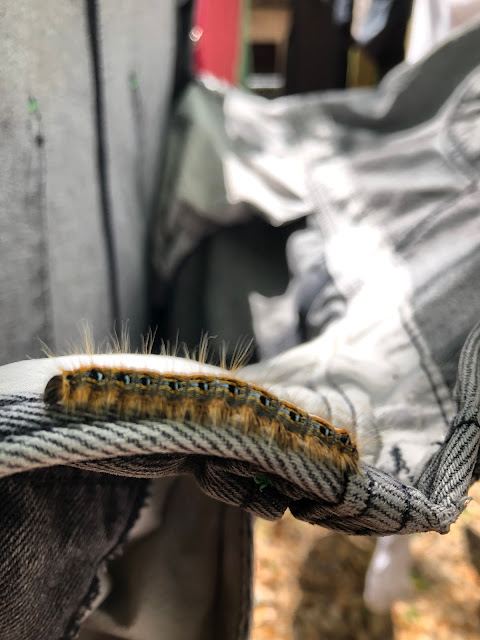 There's one on my laundry. Lord knows how many I brought in with the clothes.
But we are used to oak tassels and caterpillars and remove both from our hair and clothing and arms, one as casually as the other. Here are some Florida boys. 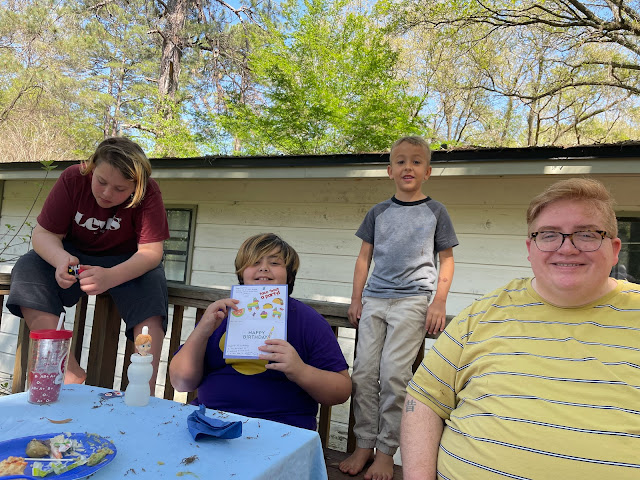 Lily took this one. 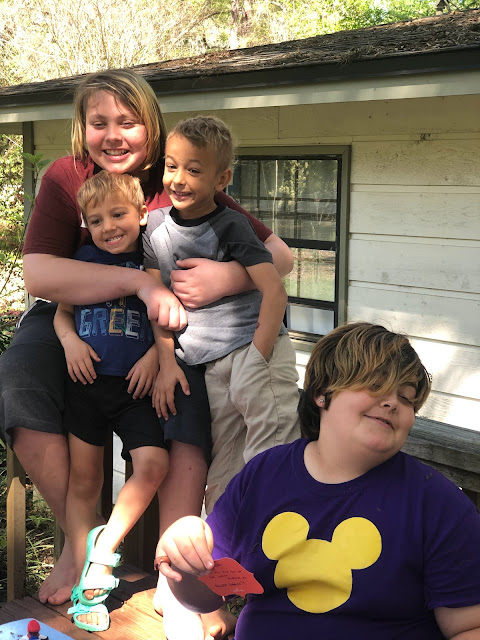 Gibson is holding his gift certificate from Uncle Hank and Aunt Rachel for a visit to a comic book store and a supper out together. I think he will like that.
I'm not sure how he felt about the puzzle I gave him. Hopefully, one of these days he'll be bored and decide to put it together and then do the riddles to give him the clues to do the escape room stuff with it. 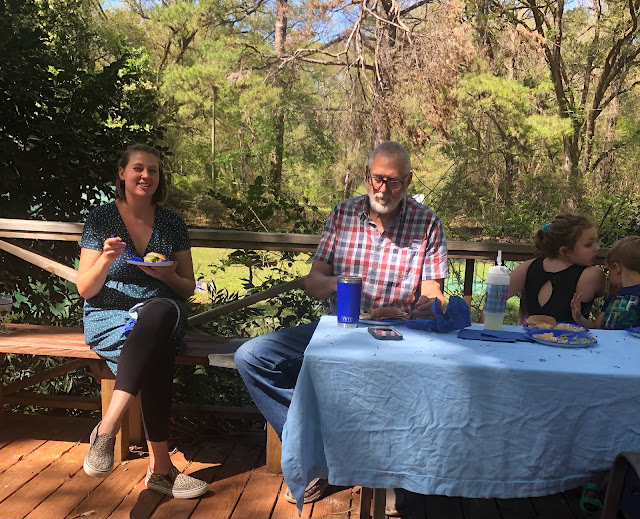 Here are Boppy and Jessie and Maggie and Levon eating their lunch. 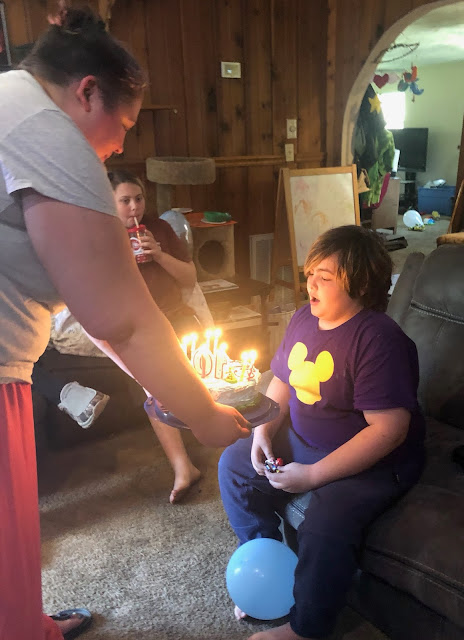 A boy blows out the candles on his cake. 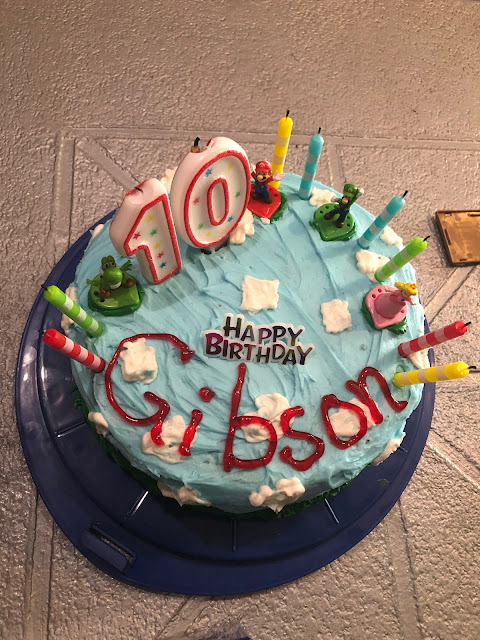 Which his mama made for him. It's a Mario cake. It was delicious.
It was absolutely a sweet party and when Mr. Moon and I left the kids were having ALL the fun. 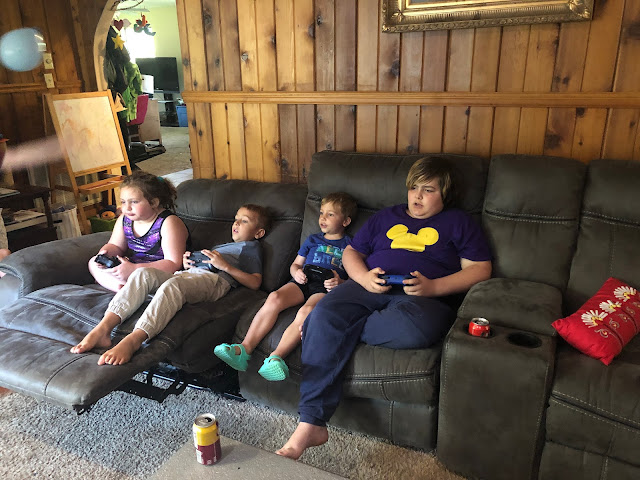 They were playing video games which they had been promised earlier in the afternoon.
I don't think anyone could have asked for more.

Mr. Moon and I drove home in the late afternoon glory. The clothes are off the line, folded and put away, there's pastry dough in the refrigerator waiting to be rolled out for a broccoli quiche. The broccoli has just been cut, the eggs have just been laid.

Before we ate the cake, Gibson came up to me and hugged me and said, "I'm going to be sad when you go home."
"Why, baby?" I asked him.
"Because I love you so much," he said.
He is the sweetest. He is just the sweetest.

Maggie's parting words to me were, "What do you say about the little egg carton I gave you?" She had filled up a miniature egg carton with carefully selected candies for us. 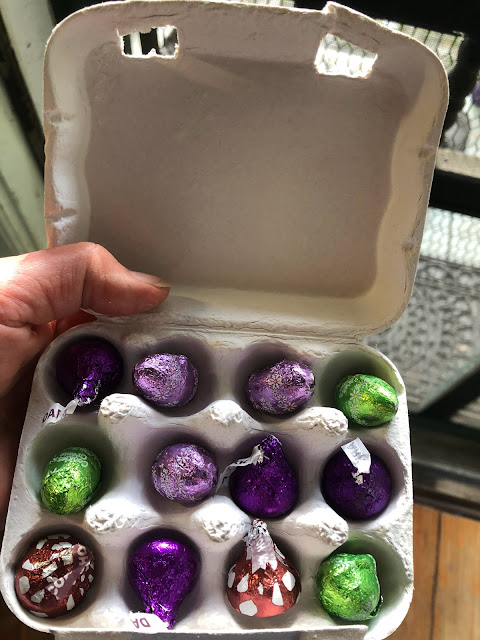 Although of course I had already thanked her, I told her, "Thank you, darling. That was so sweet."
Satisfied, she nodded her head and went back to her video game.
Manners, y'all. We all need them.
Love...Ms. Moon
Posted by Ms. Moon at 6:26 PM