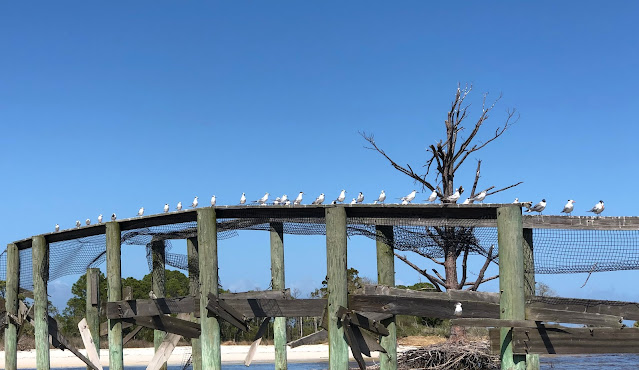 Here's another picture I took yesterday. I love the way the birds are all lined up on the dock. Birds are so orderly, aren't they? One of the funniest things in the world to me is seeing a whole group of birds standing on the beach, 99% of them facing one way with just a few facing towards the others. In my mind I always think, "This meeting will now come to order. We need to review the lineup for tomorrow's journey across the bay. Harold, we'd like you to lead the group. Marlin and Mavis, you take the next positions. It's just a short flight so don't get distracted by the occasional fish you might see on the way over. Please maintain your positions. We're planning on eating well once we get there. The Rotary Club is having a fish fry. Remember to pay special attention to the children who frequently drop their hushpuppies and never eat their coleslaw. There will be plenty for all."

Today was mostly just a catch-up day for me. I did three loads of laundry and hung it all out on the line. Everything got dry even though it has been mostly cloudy. It was breezy and warm and it's always a joy to me to see those dresses and shirts moving in the wind as if they were worn by invisible dancers, swaying and tumbling and bowing and rising to music unheard by me.

I also planted some seeds I'd saved from a pepper that I bought at the store. It was one of those gorgeous dark red peppers, not a bell, and I can't remember the name, but we planted a few last year and they did fruit. That was just a casual experience, the seeds sown in big black plastic nursery pots during the middle of the summer but knowing that they can and do sprout and produce peppers, I gathered some containers out of the trash, washed them, found a few other small nursery pots, filled them all with potting soil, and in a more deliberate way, pushed the small flat seeds beneath the surface. 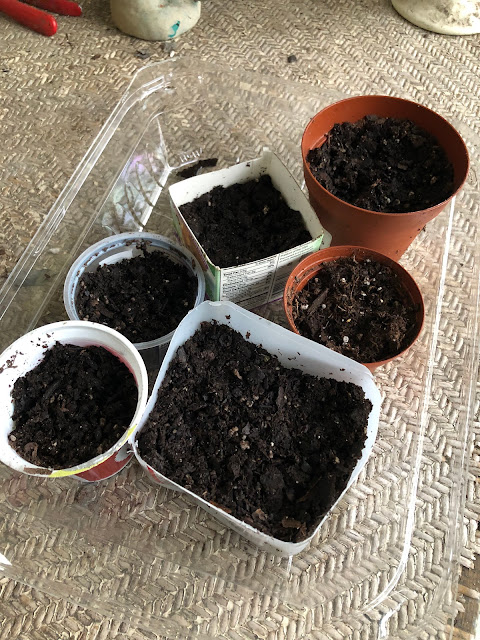 Now. Let us see if they will sprout. We should start more of our own seeds than we do and I used to do that. I'd pore over the Burbee seed catalog while it was still cold, order my seeds and start them in peat pots. These days we just go to nurseries and buy tomato plants and basil plants, pepper plants, eggplant, and so forth. We do start squash and beans as seeds but they are so hardy and seem to almost leap up out of the earth as soon as they are planted and watered. Which reminds me, I need to order some rattlesnake beans online because I am not going to trust to luck to find them locally. They are by far the best beans I've ever planted, not just for their taste and hardiness but for their everlasting productivity.
I did some weeding today and I think I came across some volunteer sprouts of the delicata squash we grew last year. I left those alone. They appeared to be squashes of some sort. I want to try to do those again but make more of an effort to protect them and nurture them. We got a few last year but I would have liked more.
We need rain and it looks like we're about to get some this week. Like I said, it was cloudy today but no rain was forecast and that proved to be true. But would you look at this? 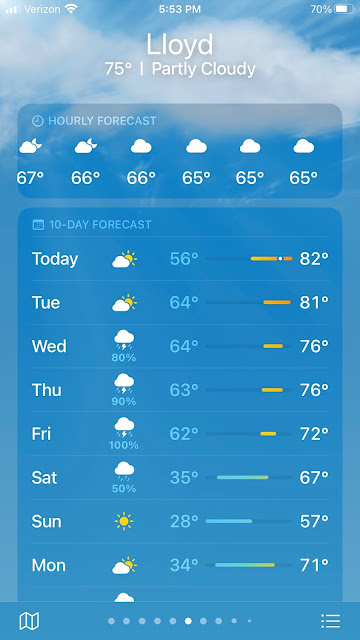 Not just at the rain forecast but the lows for Saturday, Sunday, and next Monday. It's only supposed to get down to sixty-four tonight but in less than a week we may have a hard freeze?
That is hard to believe.
The common advice around here is to not plant your tomatoes until the pecans are leafing. I just actually looked and by golly, I can see the tiny starts of leaves on the gnarly old twig fingers of the pecans. 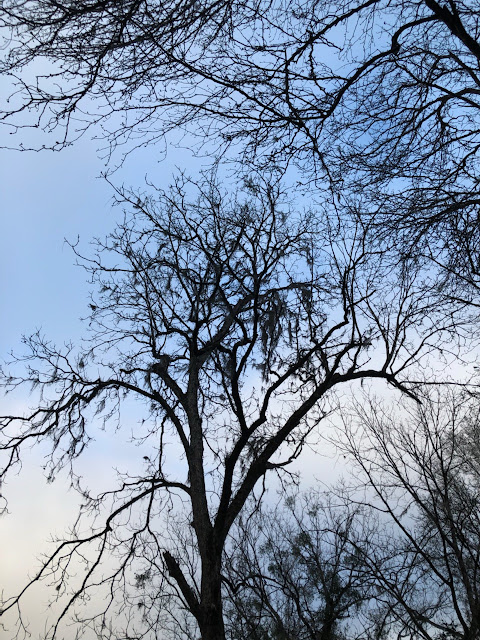 Hmmmm...
It shall be interesting to see which is more accurate- the pecan trees or the weather forecast. Either way, I surely hope that the rain does come. And whether it freezes or not, I will be happy to sleep a few more nights under the duck before it goes back in its bag in the closet, not to be used until next fall at the earliest.
Lord, when did I become a farmer? Well, I am not a farmer but we certainly plan our activities here on our little piece of ground with a great deal of attention to the weather. Which feels right. It's NOT going to feel right when we have to set our clocks ahead an hour next Saturday night. As Mr. Moon said, "Well, I guess I'll be sleeping until nine then."
Meanwhile, the chickens and pecans and potatoes and peas and theoretical tomatoes won't give a flying fuck what the clock says. They will live their lives in the cycles they are living them now. It is only we humans who will have to adjust.
As if life right now wasn't difficult enough.
We shall manage.
Love...Ms. Moon