A Day With Daughters And One Fine Grandson 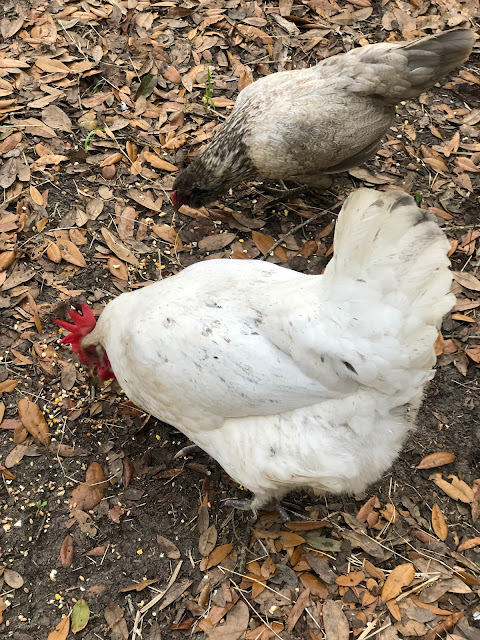 I took that picture this morning when I let the chickens out. That's Miss Violet up there at the top and Dottie in the foreground. I would say that they are friends but I am not sure that Violet actually has friends. She and the rest of the flock tolerate each other and no one has pecked at her in a good long while. Chickens do absolutely have favorite friends and I bet anything that someone has done a study not unlike one of Jane Goodall's with the chimps, tracking and recording the activities between the different hens in a flock, observing those who are dominant and those who are subservient. There is a lot going on in a backyard flock of chickens. They are such flocking creatures because in numbers there is safety and it's easiest for the rooster, if there is one, to protect the hens if he can see all of them in one area but some chickens just seem to be born more as loners than others. Miss Gracie, as we speak, is looking for seeds under the bird feeder all by herself, no other chooks in sight, seemingly as content as she can be. Sometimes a hen will suddenly realize that she is all by herself and she may set up a squalling call to try and locate the rest of her community. As I have said many times before, the noise that a hen makes when she has laid her egg is the signal for the rooster to run to the henhouse to collect her and escort her back to the others. Since they circle the yard more than once every day, there is no real telling where they will be located at certain times. I call it the stations of the cross and they make their pilgrimages as devotedly as any saint of old.

Jessie, Lily, Lauren, Levon and I met up today at Tallahassee Nurseries which is the oldest and biggest nursery in Tallahassee. I've been taking my children there their entire lives and although they used to sometimes complain about my endless shopping for plants, they are now as enthusiastic as I am, if not more so. It is a lovely nursery and big enough so that I do not feel frantic when I'm there the way I do in the smaller nursery that I sometimes go to.  Esthetically, it is a beautiful place with lots of room and many areas in which to wander and explore and wish for endless amounts of money in order to buy all of the beautiful plants we desire, along with gorgeous pots and statuary, fountains, and of course, wind chimes. 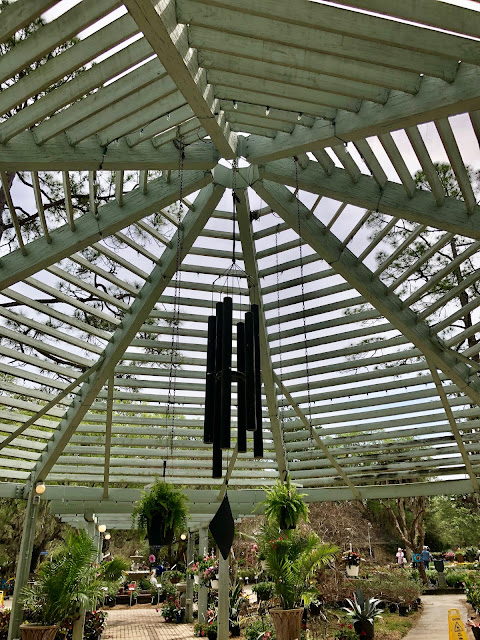 The perspective is all off here but those wind chimes are huge and when the wind blows hard enough to move them, they make the deepest tones, a sort of Zen sound that resonates in the body.

The wind was blowing today and we are forecast to be getting a cold front and behind that, a storm with high winds, tornado warnings, lots of rain...
The usual. It's not going to get nearly as cold as it was a few weeks ago but definitely cooler. Even so there were hundreds of people at the nursery, moving slowly along, reading plant tabs, pondering, picking up, putting down, picking up. We did that too. 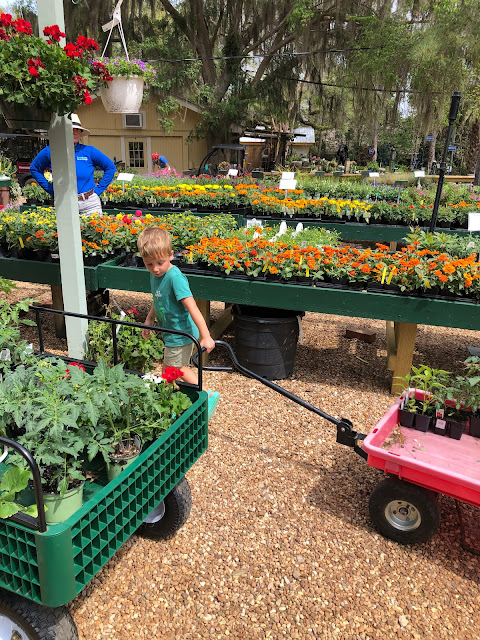 Levon is a most excellent wagon puller as we all know. 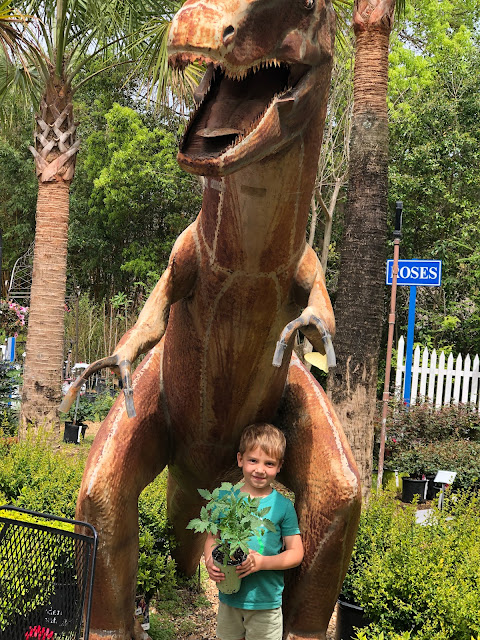 I almost forced him to pose in front of the dinosaur for me. He didn't complain too much. 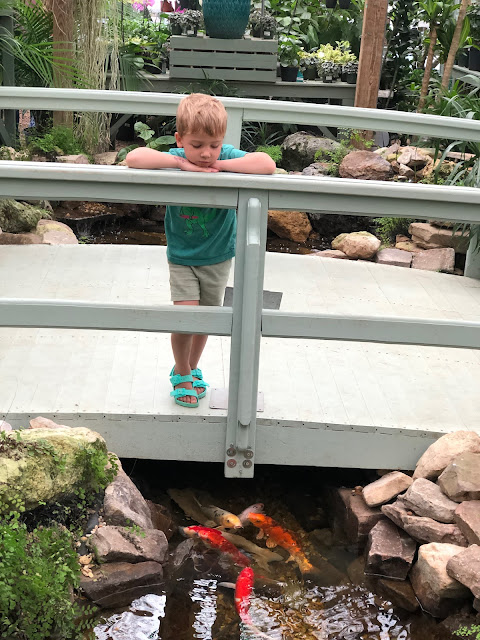 And there he is in the greenhouse, an entire exotic and beautiful world of plants and a little pond with a tiny waterfall and big, chonky fishes.
After we all bought as much as we could rationalize buying, we went to lunch. Lily had brought Levon another dress of Magnolia's that she's outgrown. This one has a tulle skirt and a mermaid on the top part. He was enchanted and had to put it on in the car before we went into the restaurant. "Do you feel beautiful?" I asked him as we were standing in line to order.
"Yes," he said and he should have. 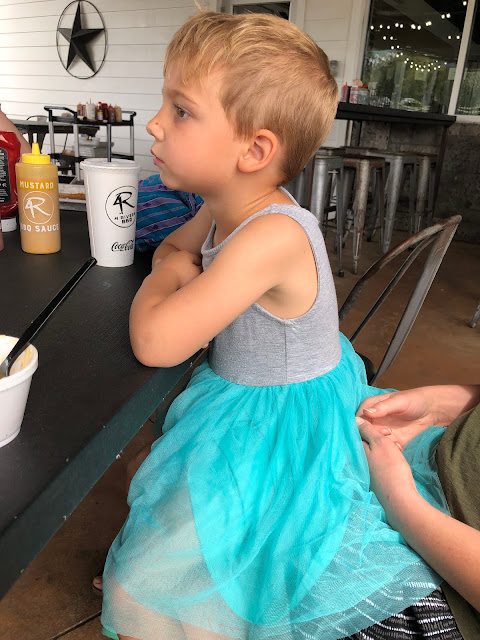 I am thinking that I should make him a dress with a camo top and brown and green tulle for the skirt. Although frankly, he is as happy as can be with his mermaid dress. This reminds me of being at a friend's house many, many years ago and they had a boy perhaps five or six at the time who was dressed entirely in his sister's Little Mermaid costume and obviously, someone had teased him and he ran up to his mother and said tearfully, "But I AM the little mermaid!"
I will never forget that. He is a grown man now, married and everything, as manly a man as there can be but to me, he will always be THE Little Mermaid.
One more thing- at the nursery we ran into a woman I know from when she and Lily worked together and I haven't seen her in forever as she retired a few years back. We hugged and she said such sweet things about my blog and our family that tears are coming to my eyes right now as I write this. She says she reads my posts every day, every day, and so right now I'd just like to say thank-you to her again. Those words meant more to me than she can know.
Love...Ms. Moon