The State Of The State In North Florida 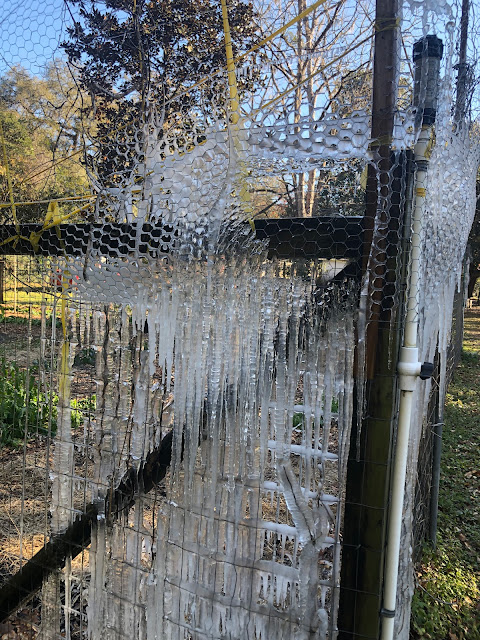 That's what it looked like this morning on the garden fence where we'd left a sprinkler dripping to avoid busted pipes. Icicles in Florida! I think it may have gotten down into the low twenties but as far as I can tell from perusing multiple weather sites, it's not going to get that cold tonight.
But as I had predicted, the chickens' waterers were frozen and there are plants that obviously got "burned" as they used to say for whatever reason when I lived in Central Florida. I remember how incredibly exciting it was when a hard freeze was coming. Those were the days when there were still many citrus groves in the area and back in those distant times when dinosaurs still walked among us, the boys in high school and possibly Jr. high were recruited by grove-owning family and friends to fire the groves which meant putting out kerosine heaters in the rows of fruit trees and then, when the temperature dropped to a certain temperature, they would light the heaters which in many cases did indeed prevent the crops from freezing. This all involved staying up all night in barns with fires to keep the boys themselves from freezing and it was always hinted that nips of alcohol might be involved and best of all- they did not have to go to school the next day. Firing groves was a valid absence pass. And I have to say that as a girl I was somewhat jealous and also very glad that my gender prevented me from those long, cold work nights.

I think I used up my monthly ration of cheer yesterday. At least it seemed that way. Today has been fine but that sweet light that some days possess that shines around me, giving everything a sort of comforting and contented glow was missing.
Oh, how I love the days when it shines though. There just seems to be a rightness about even the most pragmatic and mundane pieces of my life. A satisfaction with how things are. Not a wild glory or a manic gleam, just a true ability to appreciate and enjoy things as they are. Which is about as close to nirvana for me as I'm ever going to get, I think. I recognize the preciousness of those days and I cherish them but I can't help but feel a disappointment when I wake up and realize that the light is gone and once again I see the dirty baseboards and realize the curtains need washing and worry about things that no amount of worry can change and fret over things that must be dealt with that the day before did not cause me the least concern.

But I did clean two doors' window panels and swept the house and took the trash. And spent way too much time doing two crossword puzzles.
It's been a Sunday, I guess.

And I really have nothing to complain about. A mood is a mood and feelings are feelings but sometimes I do wonder what it must be like to be one of those people who generally wake up without having to go through existential angst but instead feel fairly cheerful and start their days with thoughts of things they want to do and accomplish and the knowledge that on the whole, life is pretty darn good despite setbacks and frustrations, situational sadness and worry. I wonder if they realize what a blessing it is to have that sort of outlook on life most of the time. I think that many of them believe with all of their hearts that it's all in a person's attitude. And that attitude is something that can be slipped on like a sweater, a tutu, a colorful pair of socks.

Well. Let us see what tomorrow brings. Who knows? I may clean more windows! Let the sun shine in.
Etc.