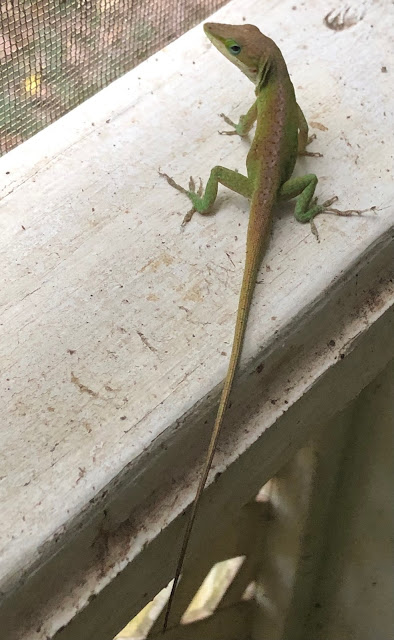 That pretty little anole was taking what little bit of sun was to be had on the porch yesterday. I do like his green legs and the blue eye shadow. Such fetching little creatures. I bet he was cold today though. We went from being gray and gloomy for days to a full-on storm with thunder and pelting rain last night with plenty of wind and drama and then right after that, the temperature dropped. We had the AC on when we went to bed and turned on the heat this morning as it was down around forty. It was still depressingly gray this morning but around noon I decided to take a walk and by the time I got home the sun had come out and it turned into a beautiful day. Mr. Moon worked outside on the fence all day long and I even got out for awhile and picked up fallen branches and twigs that had come down in the wind.
I'm going to be sore tomorrow, I'm sure and truthfully, I'm in a bit of pain tonight. Although I know that walking is good for me in so many ways, it cranks up what I suppose is arthritis my hips and back. Some sort of inflammation, anyway. I'm sure it's not going to kill me. This has been going on for decades and I'm still walking.

So- air fryer update!
Last night I cooked four little bream (pronounced "brim" for some unknown reason) that my husband pulled in from a river on New Year's day. Those little fresh-water fish may be my favorite type of fish, their meat so white and tender. I've always pan fried them whole as they're too little to filet but last night I decided to try them in the air fryer and hoped for the best and actually, they may have been the best I've ever made. I just did the flour, then egg, then flour and cornmeal thing with salt and pepper, sprayed them with a little olive oil and put them in the air fryer basket and they came out so beautifully. No grease to fight with the fish, just sweetness. We ate them with lime juice and hot sauce- perfect.
Today I used the air fryer to make some tuna melts and they came out nicely too. Tonight I'm going to make Mr. Moon some chicken wings because I think that's what he had in his mind when he bought me the little appliance. He does love Buffalo wings and he knows I'm never going to fry any for him and figured this might be a way to get me to make him some. I have a feeling he's going to love them.
I don't really care much for them so I made a smallish pot of soup with leftover beans and greens and corn and celery and onions, a sort of southern minestrone because I'll add some macaroni to it and sprinkle the top with parmesan. And that will be supper along with some heated up cornbread, perfect for this chilly evening.

We've been watching the Beatles documentary, "Get Back" a little bit at a time and it's just depressing the hell out of me. It is so damn obvious that they were all weary of being Beatles, the music, the act of creation no longer being much of a joy. Paul saying, "I'm tired of having to tell everyone what to do," and George leaving for lunch one day and just not coming back. It's impossible for anyone who did not live through the time when the Beatles were actually playing, on the charts, the radio, our record players, to know or understand what they meant to us.
They were...well, magical.
They made the music that we danced to, made love to, got stoned to, tripped to, came into a sort of universal awareness to.
I suppose that the brightness of the flame which they were could not burn for long. Or perhaps that's just a very polite way of saying that they ran out of juice for it all.
I've been pondering all of this and thinking about what Paul McCartney (what a pretty boy he was!) said recently about the Rolling Stones which is that they were a blues cover band. I can't imagine why he'd say that- he obviously knows that really, no, that's not what they were and it's not what they are. But perhaps deep in his soul, he knows that like the Stones, the Beatles had that magic, the four of them together, and that unlike the Stones, the Beatles' time together was just so short.
I don't know. We'll watch the whole thing but just as what those dear boys were doing in the studio did not bring them joy, it's not bringing much to me, either. Sometimes, when they play a song that I remember with such deep, deep love, I sing along very quietly but none of it makes me want to dance.
Speaking of which, I do love the parts where John and Yoko dance in the documentary.
I wish they were still able to do that- dance together.
Well.