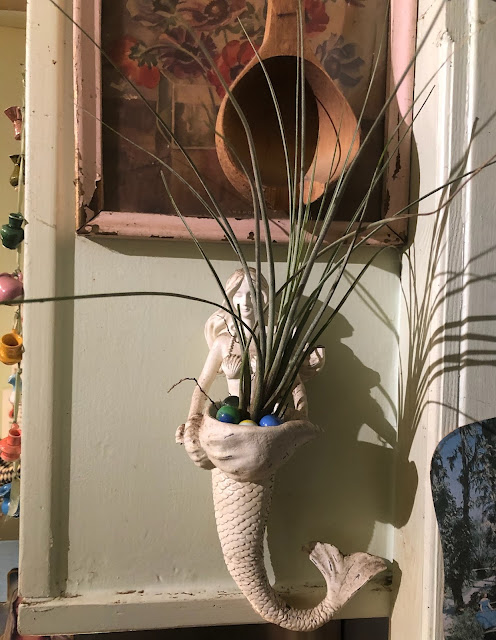 I woke up this morning from a dream that left me unsettled- not an unusual occurrence. For whatever reason, dreams with my stepfather in them are happening almost nightly.
I wish they weren't.
In his last night's appearance he was actually apologizing to me...for brushing my hair when I was asleep.
In my dream I thought, "That was not hair brushing."
I have absolutely accepted the fact that what happened to me as a child will always be a part of my psyche and as such, something that I cannot afford to get too worked up over. And I know that there are millions who are in the same situation. We may all handle the residual damage differently but we have all developed our coping mechanisms. Some of them healthier than others. Some of them no longer even necessary but so much a part of us that we've lost our ability to let them go.

Well. That's not really what I came here to talk about this evening. Actually, I didn't have much of anything on my mind when I sat down. I've just had a very house-wifey day and the minutes and hours have gone by of their own accord as I've floated through the motions.

In covid news, Jessie reports that everyone in her house except for Vergil has a snotty nose and that is that for any symptoms. Lily reports that Owen is still testing positive and she and Gibson and Maggie are still negative. I actually talked to all of them today. Maggie called me on Gibson's phone and then I got to speak to the boys too. I told Owen that even though I knew he was going to be fine, that I'd cried when I heard he had Covid.
"That's okay," he said.
"I know," I agreed.
I also Face Timed with Maggie on her mother's phone. We are planning a sleepover for next weekend if everyone stays negative. She wants macaroni and cheese and chicken nuggets. And she says she has a surprise for me! I need to find a surprise for her too. She's such a sweet child.

It's getting colder. Might freeze tonight so I have covered my Roseland mango and my back porch plants. The front porch plants are still covered from when it froze last week. The sun did not show its face all day long for the second day in a row but it may tomorrow.
I've made a gumbo which is simmering and waiting for the shrimp to go in. There's a loaf of sourdough in the oven and I'll make rice because for whatever reason, there must be rice with gumbo. I just tasted it and I do think I got the roux just about right tonight. Here's what it looked like after it was done and the chopped onions, celery, garlic and peppers went in. 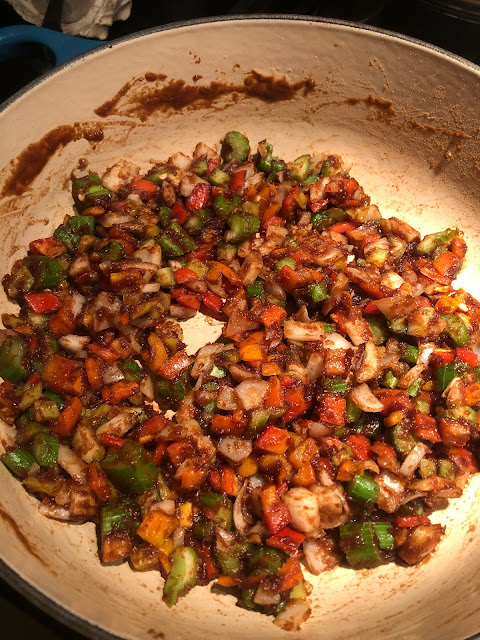 Can you see how dark the roux is? It's such an interesting dish to make. You have to stir the oil and flour for a long time, patiently watching it go from ivory to the color of an old penny. Some say it should be the color of mahogany. But it's that roux and its slow, intense browning that gives gumbo its earthy deliciousness. Yesterday I made a chicken stock with the carcass of the roast chicken I'd made the day before and I added the shrimp shells to that today and let that mixture simmer while I made the roux, then poured it through a strainer into the roux and vegetables, added the okra and sausage and tomatoes and now, like I said, it's waiting for the shrimp. Every time I make gumbo I think of the Africans who brought this celestial dish here along with the okra that brings the whole thing together. Sometimes when I think about cooking I feel as if through the food we make we are honoring and actually tasting so many cultures and horticultures, too.
It's history and art and skill and practice and intuition and science and tradition and creativity all brought together into one place. It is no mystery why the kitchen is the heart of the home. 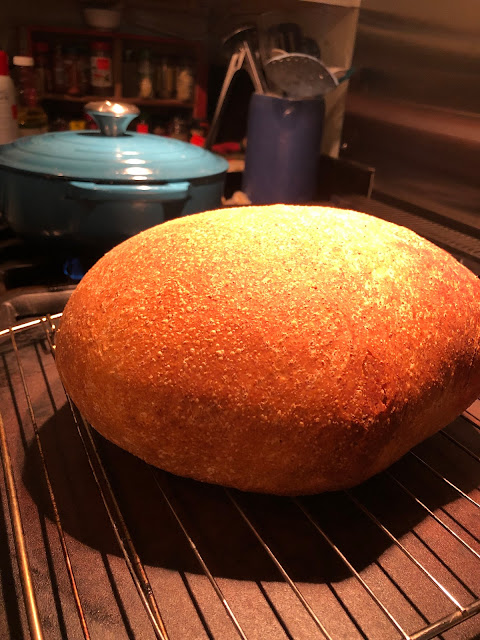