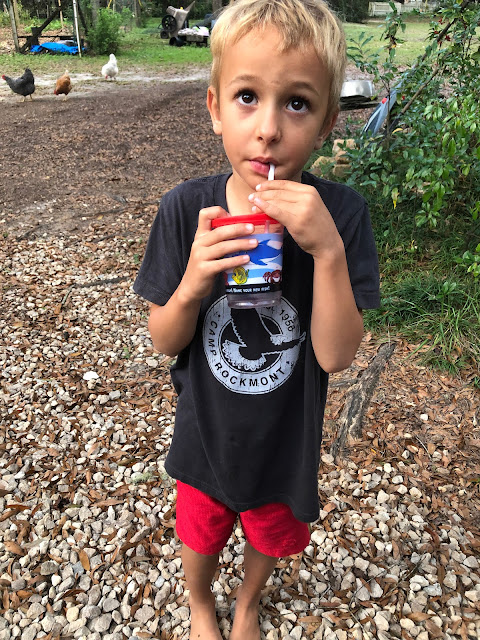 Vergil's family all left, some yesterday, some early this morning. The house must seem so quiet now. I had asked Jessie if they wanted to come out for some black-eyed peas and greens today for their annual January 1st dose of luck and peace and riches or...something.
This is just what we do in the south- eat black-eyed peas and greens on New Year's day and although I do not know the true history of the custom, it seems a ritual that is extremely doable and sensible, too, in its own way.

This year I cooked some dried black-eyed peas from the store and when they were getting soft, I added a bag of the field peas we froze last summer from the garden. I figured that would be extra lucky. And I cooked them with what was left of the Christmas ham which was bone mostly, but some meat. I think that hog jowl is more traditional to cook the peas with but I already had the ham and waste not, want not. I also added some leftover rice to the peas because it ain't Hoppin' John without the rice. And don't ask me why we call it Hoppin' John, either. Hank probably knows.
I had frozen some of the leftover greens I cooked for Christmas and I thawed those out and added them to a few more I picked this morning. I will make cornbread to go with it all in a little while.
Anyway, what was I talking about?
Oh yes. The Weatherford family.
They did come out for a little while. Long enough to check out the virtual reality situation. It was fun to watch Vergil dance with the robot but it was a joyous moment, watching Jessie dance with it. That girl can dance! I haven't even SEEN the robot yet- still, the only thing I've seen (watched?) are the sharks and I am still thinking of that. How it was sort of wonderful.

August was not feeling so well but good enough to be sassy. Levon asked for some juice and I gave them both some. They know we always have grape juice and cranberry something-something juice. Maybe pineapple or mango. They love for me to mix the two and I add water, telling them that I am "freshening" their drinks. They accept this explanation as to why I dilute the juice. 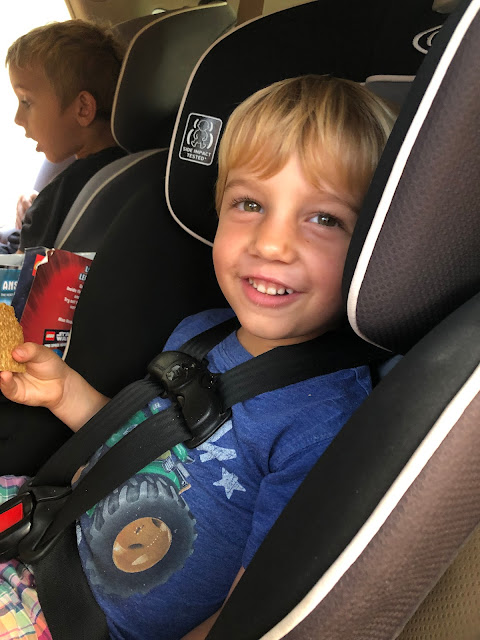 Each of the boys got a cinnamon graham as a going-away treat.
They're so funny. I told Levon that I had missed him and he said, "What do you mean?" His vocabulary and the way he speaks reminds me far more of a nine-year old than a four-year old. He and his brother are both quite literal in their interpretations of what is said. This delights me as it makes me think of what we're really saying when we speak sometimes. It makes it a bit hard for them to get the jokes in an old Bennett Cerf kid joke book I have because the jokes are based on how a little kid does the same thing- interprets things literally instead of in their common usage and just as the little boy named Marvin in the book doesn't understand why the things he says are funny, neither do they although I try to explain why the jokes are jokes and they nod their heads sagely and say, "I get it."
But they don't really laugh.
I wonder if they've been read any Amelia Bedelia. She is the queen, of course, of literal speak. I should ask about that.
So it was absolutely delicious to see them (although I didn't actually taste them) and their mama and daddy. I sent them home with enough peas and greens to ensure good luck in the coming year.
It's been a very laid-back New Year's Day. I did take down my Christmas decorations.
Meaning I took the little strings of lights off the tiny tree and carried it back to the porch. I told Mr. Moon, "I've put the Christmas decorations away."
"Thanks!" he said. And we both chuckled.
It's still quite warm, though not as muggy but I have the air conditioning on. It's supposed to rain tomorrow and start getting cooler. I'll be so glad to turn the AC off again. It is confusing to my subconscious which relies on cues like air-feel and temperature and humidity or lack thereof, along with the sights and sounds that come with winter. I look at the blooming camellias and then the AC kicks on and I am unsure what universe it is that I am in, or season either, for that matter.

Eh, we're just a minuscule speck of dirt and water, spinning in a minuscule speck of the universe and that does put things in perspective, I suppose. Meanwhile, I should go ahead and plant my sugar snap peas and my potatoes. Let 'em get going now instead of waiting for February. Might as well try to adapt to what is instead of insisting on basing everything on what used to be.