I Feel I Was Probably A Vector Of Disease 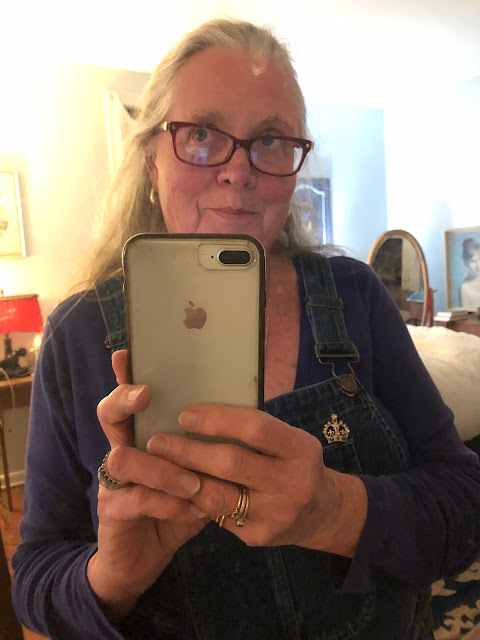 Here's a picture of me in the overalls with the little crown pin. Obviously, I should have cleaned the mirror first. And obviously, it is not of my entire body because I am too vain to be showing that. And I could clean the mirror and try again but the whole experience was painful for me and so I will not. There you go. I have been wearing the overalls all day long and I continue to love them. Who even knew that J. Crew made overalls?

I feel extremely guilty right now. Jessie and her family came over today so that Mr. Moon could help Vergil replace the rear brakes on Jessie's car. Mr. Moon has all the tools and equipment and space to do such things (although he had to pull the large boat out of the garage to create that space) and so this is the place to bring your vehicle for repairs.
Dad's Auto Repair Shop, as it were.
And I don't feel guilty about that, per se. Of course. I'm glad that the brakes were fixed. What I do feel guilty about is that I probably got way too close to the boys and to Jessie and I still have this cold thing. If I still have it on Monday I'm going to go get tested again and this time request the non-rapid results type. But whether I "just" have a cold or actually have Covid, I had no business even being around the Weatherfords and I know it. I even read some books to the boys. I told them not to cuddle up too close but come on- I was sitting right next to them and reading out loud.
At least I made chicken and dumplings for everyone's lunch.
Like that's going to help when they all get sick.
I played Battle with August too. "I'm going to whip up your butt!" he told me. I laughed and laughed when he said that. And then I said, "You shouldn't talk to your Mer like that."
"Why?" he asked. And I couldn't think of one damn reason so I just laughed some more. And then he did indeed whip up my butt.

The first thing the boys wanted when they came in the house was "butter bread." They spied some rolls I'd made a few days ago and so of course I buttered them each a half and warmed them up. 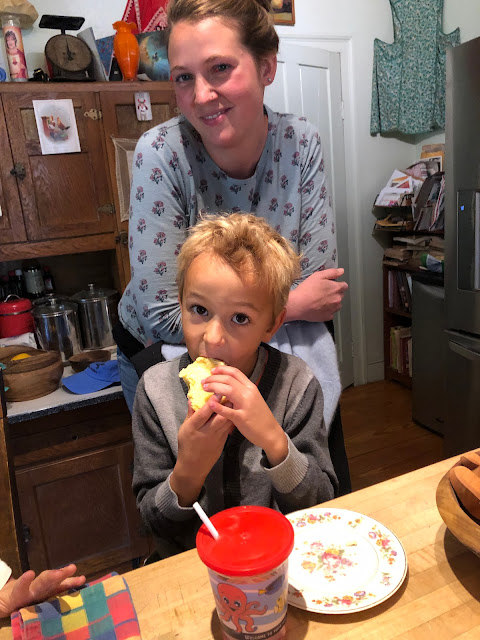 There are few things on earth as delicious as butter bread. They liked the chicken and dumplings too.
They played outside off and on and were pirates in the boat. 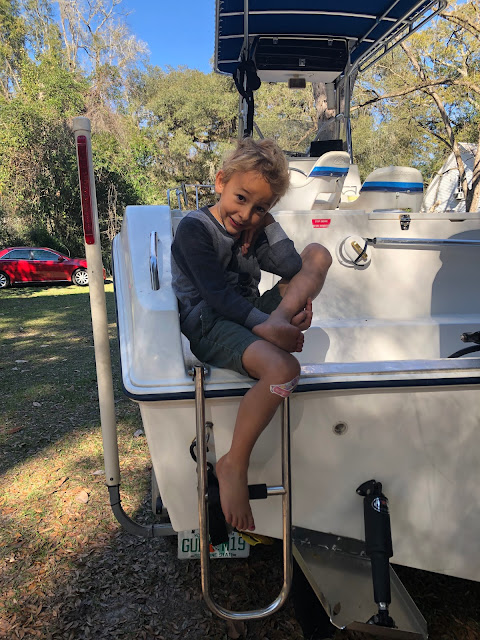 He's such a poser. 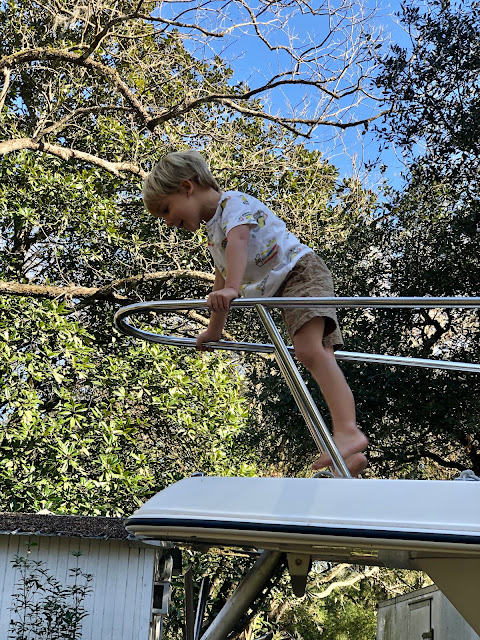 And yes, they were wearing shorts and were barefoot but were hardly in danger of frostbite. It was in the sixties.
When I sent them off with going-away treaties, I apologized to Jessie and Vergil for no doubt giving them whatever it is I have.
"We made the choice," said Jessie.
Yeah. But I shouldn't have given them one.
Sigh.
So have any of y'all ever heard of or made a Mississippi pot roast? I first heard of this bizarre dish on a FB post of a friend of mine. The "traditional" method of cooking it is in the slow-cooker with a packet of ranch dressing mix, a package of au jus mix, some pepperoncini, and, well, a lot of butter.
This did not sound healthy in the least nor could I combine those flavors in my mind and come up with anything appealing. However, the NYT's cooking app came up with a very similar recipe except that you sort of making ranch dressing yourself and no au jus mix and less butter. But still the pepperoncini.
And I have done what I always criticize and laugh at people for doing which is to completely change the recipe and see what happens.
For one major thing, I've used venison roast. Venison has so very little fat in it that I did not feel too guilty about the butter. Also, I had no pepperoncini but of course had plenty of pickled banana peppers. And I added a little bit of Lipton's beefy onion soup mix and some actual ranch dressing made in a Hidden Valley. Somewhere. It's hidden so we don't really know. And onion and garlic.
Since I don't really like using a slow-cooker, it simmered in a Dutch oven on the lowest setting of the Thermonster almost all day and was still not getting to the point where you could shred the meat with two forks. Easily. Or, to be truthful, at all. So now it is in a very low oven and we shall see if it is tender by supper time.
I really can't believe I'm making such a thing. And yet I am. If there's one thing in life I have learned it's that we should never say never because we just might. At least once. And if we like it, we can do it again. And if we don't, well, that's that. Except for certain drugs which we should NEVER do and don't ask me how I know that.
That's my bit of wisdom for today.
Love...Ms. Moon