Covid Math And What Does It Matter? 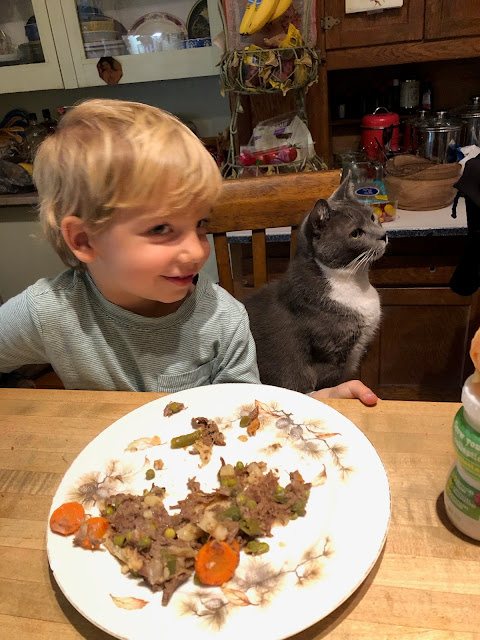 I got a very cute visitor today and his mother came too. The weather is dreary again. Cold and rainy all day long. No line-dried sheets for us this week. It's one of those days that make me so very, very thankful for good heating, a clothes dryer. And lots of other things too like a dishwasher and a gas stove but at this moment, I am most appreciative of having heat and a way to dry clothes.

It was a breath and a shot of fresh air having Jessie and Levon over. Jack was happy too, as you can see. He was trying to mind-meld Jessie into offering him some of her roast chicken which he is very fond of. Levon loved the pot pie and almost finished up the last piece of it. Jessie ate what he didn't. She said she liked it too.

So of course after their visit last weekend, Jessie and Levon began to have very slight cold symptoms. Or, at least symptoms of something. So Jessie took them all except Vergil to get tested again. They got PCR tests and while Jessie was here today, she got an e-mail informing her that August was positive.
The one without symptoms.
This of course led to all sorts of speculation. Were Mr. Moon's and my negative tests false negatives? We'd gotten rapid tests last week. Had Jessie and Levon's tests been false negatives? We did all sorts of math (saw Jason and Owen two weeks ago, came down with symptoms about five days later, tested two days after that, saw the Weatherfords the day after that....blah, blah, blah) and we finally decided that it is what it is and she took Levon to go pick up August from school and get three more PCR's.
I called Mr. Moon who was in town to get two at-home rapid tests which we took when he got home and they showed negative.

What the hell? I'm not going to get a PCR test because it wouldn't change a thing to know I had it. We're still masking religiously. I think I'm going to figure that if Jessie and Levon come back negative again, it will be safe to assume we didn't have it and if they come back positive, I'm going to assume we did.
Does that make sense?
None of this makes sense but it is quite possible that August picked it up at school.
Nobody else at Lily's house is testing positive. Owen, it turns out, is the only one in the house who hadn't had a booster so that may be an explanation of why he seems to be the only one who got the virus.
Who knows?
Not me.

But that's what happened over here today and in my family.

I watched the last episode of "After Life" and I'm not sure how I feel. No spoilers because some of you are watching it and enjoying it. But I think I get the message of the last episode quite well although there is certainly a lingering question. If you watch it, you'll see what I mean.

Mr. Moon just made nachos in the air fryer and brought me one. I think we shall try that again. I mean- what's better than nachos? Last night I air fried some cauliflower and onions and that was pretty okay although my husband told me that he'd rather eat cauliflower raw. With dip. He said this in the most loving way possible.
"Well, that's easy," I told him. He just doesn't really like cooked cauliflower which is too bad for him. He needs to go out of town again so that I can make my delicious cauliflower dish. Actually, I could make it with him here, couldn't I? What if I made that and salmon and LeSueur peas? He'd eat it but that would be so mean.

I just remembered something else that I am extremely grateful for on this wet, cold day- Goodwill cashmere! It's just the most perfect thing on days like this. I really need to find more of it as I've inadvertently shrunk a lot of what I own. I was looking at a sweater the other day that is not only too small for an adult now but also has holes in it and I thought, "Hmmm...I could mend that and give it to Maggie!"
This mending thing is getting out of hand. Not everyone appreciates my artistic, wabi-sabi techniques. I think I need to crochet a few more potholders instead.

What silly problems. Not even problems at all.
I think I'll go inform my husband that I'd like a martini now.

P.S. And hot and cold running water. I think I may be most grateful for those. I remember when I had a hand pump out in the back yard of another house many, many years ago and how it got so cold the winter we lived there that when I'd pump water, ice chunks would come out before the water did. I have a very visceral memory of this. Not to mention the cold, cold walk to the outhouse.
Lord.
I can't believe I lived that way but I do not regret that I did for one red hot second.