When I change my calendar at the New Year, I transfer all of the birthdays and anniversaries from the old one to the new one. I do realize I could do this electronically or, whatever you want to call it, on my phone, on my laptop, but I want that calendar to have it down in the proper square in ink, with a little heart after the person's name on a birthday, a heart around two people's name for an anniversary.
This is how I do it.
I also put down death anniversaries. For whatever reason, those names do not get hearts nor any symbol because what would I use? A heart would be good but that indicates a birthday.
So just the name.
Today's square, January 16, reminds me that it is the anniversary of my friend Lynn's death. She died in 2008, so fourteen years ago. That can't be right and yet, it is. My god, time flies so fast. I looked up the blog posts I wrote around the time of her death and so much happened that I don't remember. Some things, though, I do. I remember a man who worked at the nursing home where she was living, asking me one day when I was visiting her, spooning ice cream into her mouth, if I had known her "before all this."
Oh god, that tore my heart out.
I'd known her since 1975, so yes.
Enough time has passed since her death that the anniversary of it does not roil the very atoms of my soul anymore. I know the body does hold anniversaries within it in some way that we don't understand. But perhaps that visceral clock or calendar loses its strength over time. I don't know.
I can think of Lynn now and although I feel great sadness at the way her disease wrenched life from her one nerve ending at a time, slowly, and horrifically, I can think of the joy of her too.
God, she was a joyful, dancing woman.
She was a pure ray of love on this earth. I doubt I'll ever meet another human being with a spirit as simply good as Lynn's was.

Here's a strange thing- I've been thinking about my mother's death too. She died in January, that I could remember, but I've never put that date on the calendar.
I don't know why and I do know why and there are so many reasons for both sides of that little conundrum.
So I went back on the blog again and did a search for "mother's death" and I am certain that I had noted this before but it came to me as a complete unremembered shock that her death anniversary is the same as Lynn's, although Mother died in 2013. Only nine years ago.
How could I have forgotten that?
It's too fucking weird. And am I that fucking forgetful?
I guess so.
And if my feelings about Lynn and her life and our relationship and her death are relatively uncomplicated (although not entirely so, of course) then my feelings about my mother and her life and our relationship and her death are as muddy and jagged and painful and confused as they could possibly be. And yet, I am fairly at peace with them. I know for a fact that there are things I will never know, never understand, never completely accept.
But it's all right. Life is probably not meant to be entirely figured out, is it? Not mine, not yours. We are complicated individuals, all of us, and the blessing comes not in fighting that, but perhaps in embracing it.
I don't know. I do not know shit.

It's been a chilly, windy, raw day here in Lloyd. I did a few things outside but mostly have been in the house, staying warm and cozy. I feel better today but in family news, Jason has Covid. He's been having cold symptoms for awhile but tested negative until last night. He had retested because he was eating and with one bite he could taste, and with the next bite, taste was gone.
The kids were with him at his house so they and Lily and probably Lauren, although I'm not sure, are quarantining. Lily's going to take everyone to get tested tomorrow.
Sigh.
Our family has been so lucky. And we are lucky still. Jason is only having the mildest symptoms. May he be fine.

One of the things I did today was to pot up some plants I'd rooted. Oh, how I love making plants out of plants! Life, whether human or green, wants to go on, doesn't it?
Until it doesn't. Or can't.
That is just the way of it. Of us.
Here's one of my favorite things right now. 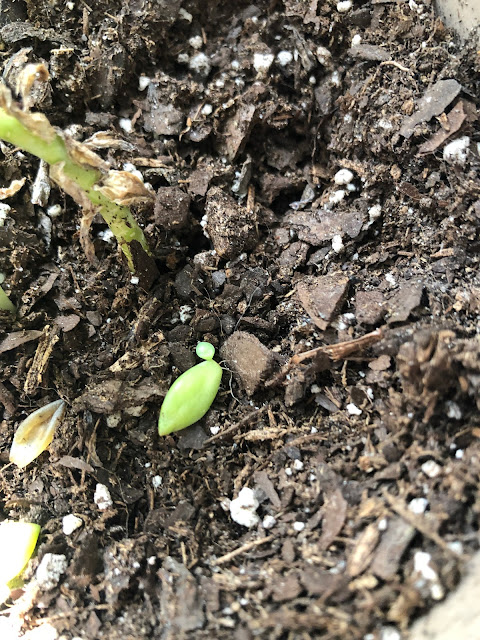 That larger green thing is the leaf off of a succulent that I picked a tiny sprig off of in Eastpoint when I was there with Terry and Vicky and Mary. Just one sprig and that little part of it fell off and I left it on top of the dirt to see what would happen and there, growing from it, is a sprout which is literally the size of the head of a pin. If that.
Every day I peer at it carefully to see if it's grown. The very miracle of it cheers me.
So yes, today is a death day just as all days are for someone, for some thing. And yet, life is starting and continuing for so many others, whether humans or seeds, planted with purpose and hope, or seeds planted with wind and a lucky landing or via the intestinal track and scat of another living creature, bird or cat, raccoon or deer.
That's what I think. And it's all a goddamn miracle.
Love...Ms. Moon
Posted by Ms. Moon at 6:28 PM